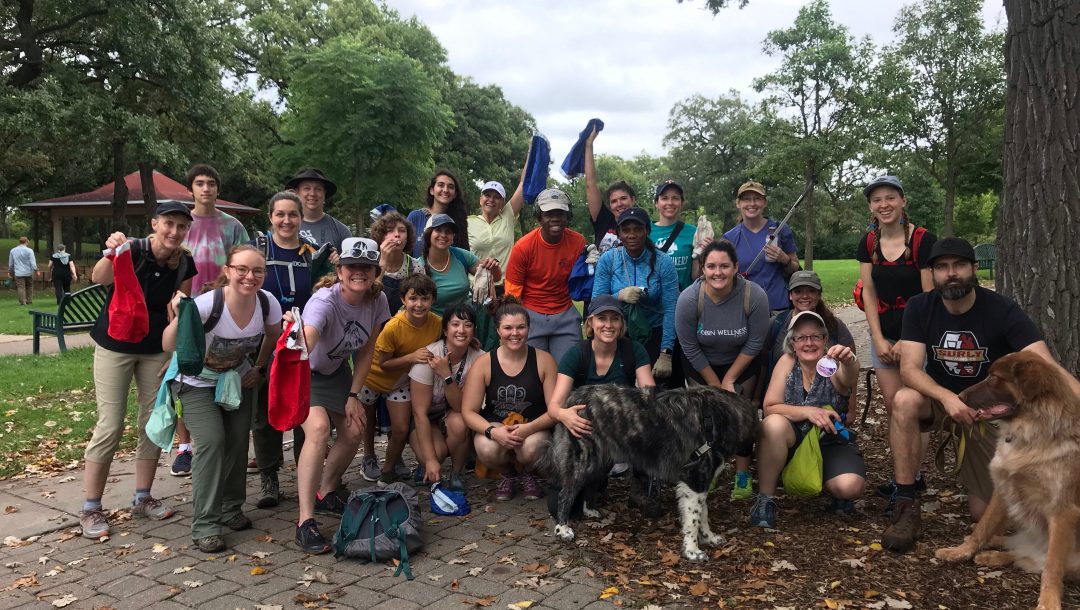 Hey Mom! Im in the Paper!  As a follow up to my last post, I’m sharing this nice article that the Minneapolis Star Tribune published in their Outdoors section last Friday, that highlights the Groundskeepers (and yours truly).  Read more about the work we do, what I’ve learned along the way and how you too can help preserve our outdoor spaces.   Please feel free to read it via this link, or in the pasted section below.

Minnesotan says her role as a Grounds Keeper, an outdoors stewardship program, was simple but had a profound personal effect.

By Scott Stowell Special to the Star Tribune 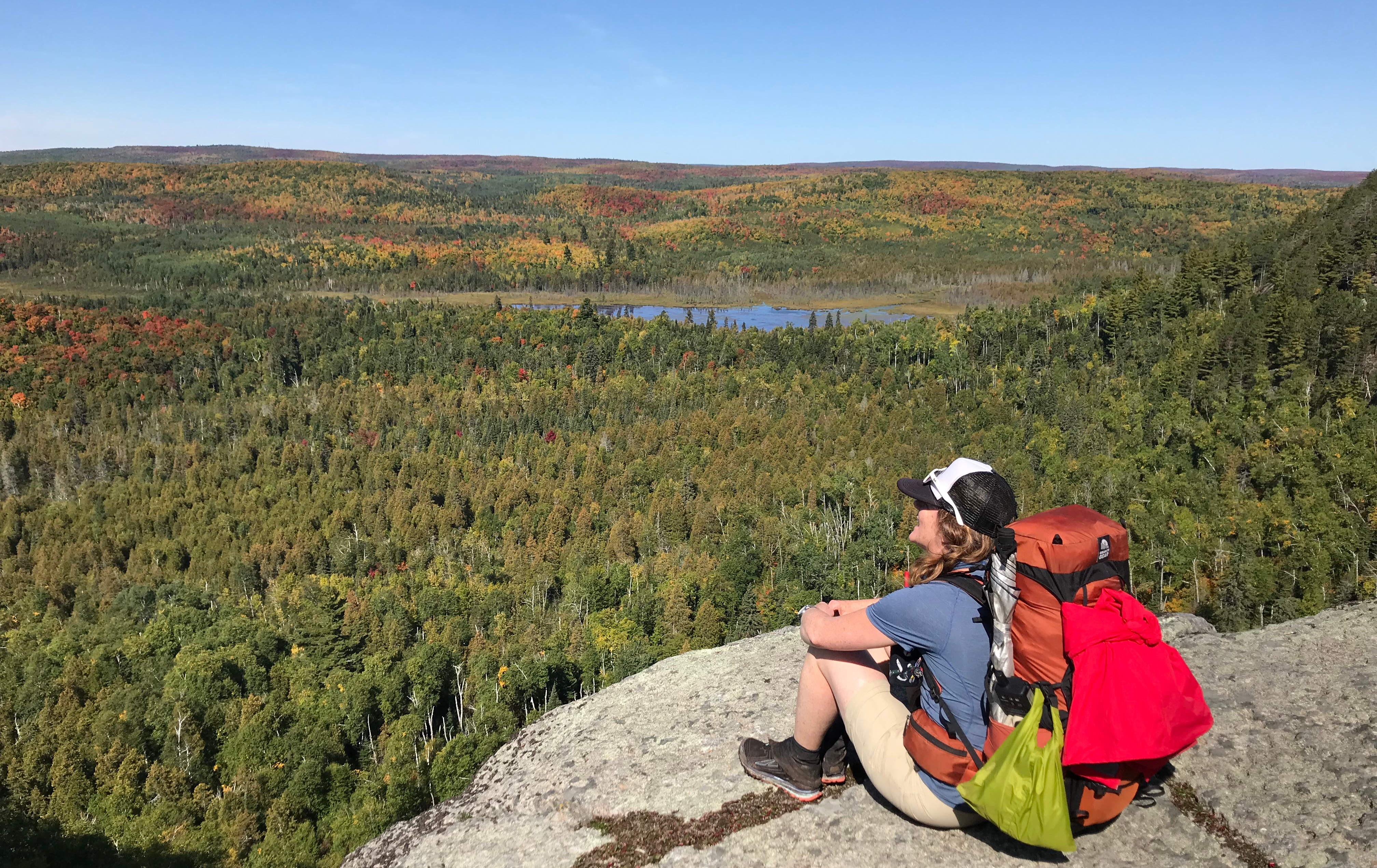 Jen Theisen, on the Superior Hiking Trail — her domain as a Granite Gear Grounds Keeper in 2019.

It’s a noble undertaking that is unfortunately needed: picking up litter left by others. But unlike Adopt a Highway sponsors, the names of wilderness garbage collectors aren’t reflected on roadside cleanup signs. They pack out trash quietly for the dignity of the trail and all inhabitants therein.

Two Harbors, Minn.-based Granite Gear developed its trail cleanup program — Grounds Keepers — in 2017 to support hikers, and now paddlers, who want to, as the company suggests, “Leave It Better.” The concept was inspired by the Packing It Out campaign in 2015 led by hikers who removed 2,000 pounds of trash from the Appalachian and Pacific Crest trails. Since then, the Grounds Keepers program has grown from cleaning up long national trails to encompassing smaller regional trails, parks, waterways and lakes. Total waste removed is closing in on 10,000 pounds, or five tons, of trash. 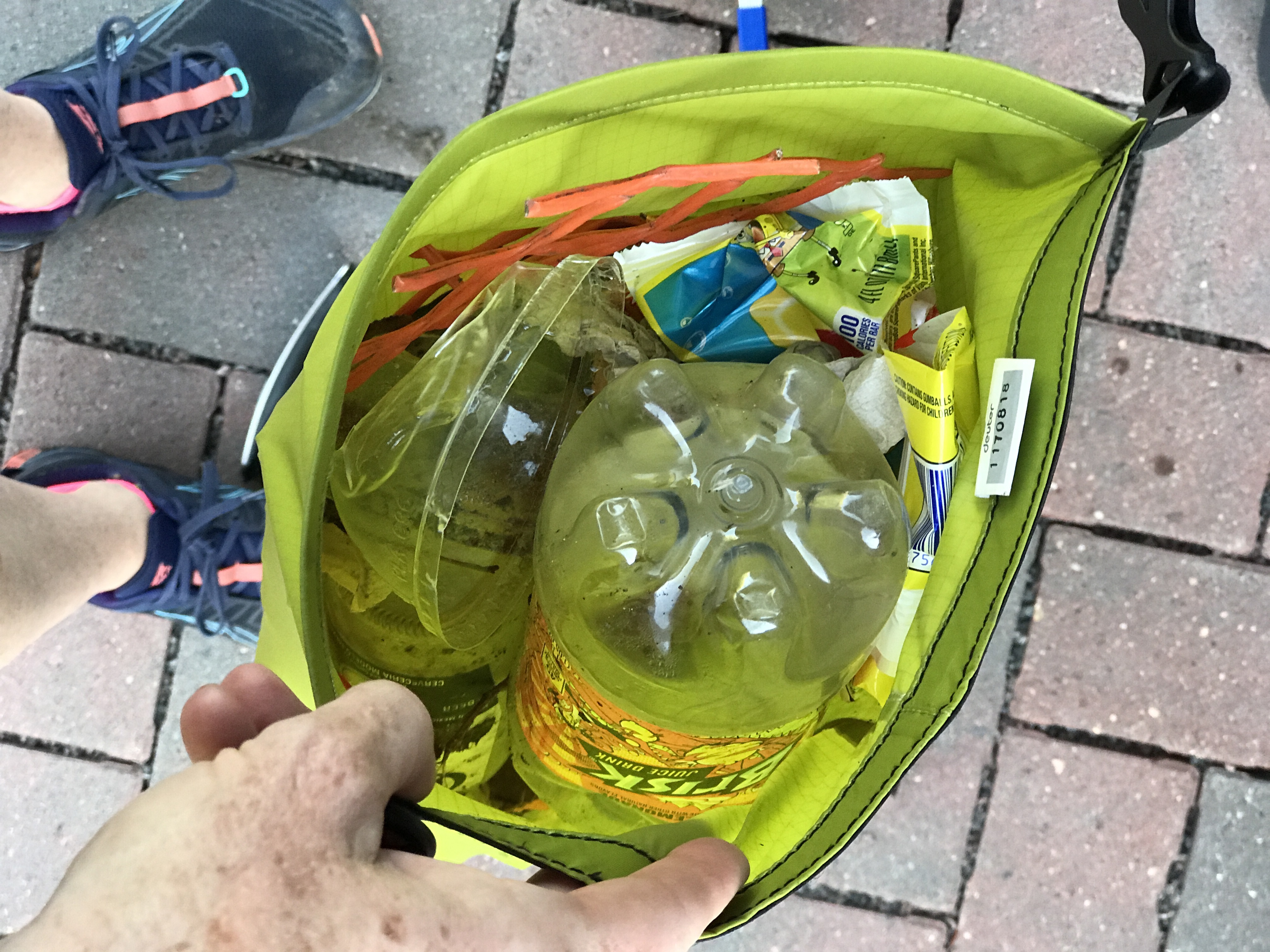 All told, on solo and group hikes, more than 350 pounds of trash has been hauled off the Superior Hiking Trail and other natural areas, Theisen said.

Granite Gear selected 30 Grounds Keepers nationwide for 2019 who personify the “Leave No Trace” ethic and commit to (Correction: this should have said ‘hiking 300 miles’). Each is outfitted with specific gear from the company and multiple partners. Backpacks, stuff sacks, headlamps, food and scales are among the equipment.

The company expects 200-300 applications for 2020 by the deadline Friday, according to spokeswoman Julie Bacon.

But this is a story about a Grounds Keeper’s journey: Jen Theisen, 47, of Minneapolis, is a member of this year’s group.

Theisen (pronounced Tyson) said she didn’t have a strong outdoors background as a child, but she became a Boy Scout leader for her sons and found she loved camping and hiking. Her passion led her to develop the outdoor blog wanderingpine.com, and become an ambassador for Women Who Hike, an international organization that empowers women.

To date, Theisen has collected 350 pounds of trash from her target areas: the North Shore’s 310-mile Superior Hiking Trail and Minneapolis regional parks. She did it individually and by crew, coordinating several large-group trash pickups. Below are edited excerpts from a conversation about what she has found:

I think the farther out you go, the less trash you’ll find. The farther into the city you go, the more litter you’ll find. On pristine trails like the Superior Hiking Trail, I found almost no trash. Trailheads and popular urban parks are where I usually found it. At trailheads, people aren’t there necessarily to hike. There were fast food bags. There were big heaps of trash in the bushes mostly in urban areas. I find a lot of dog poop in plastic bags, which is my pet peeve. Either leave it out of the bag, or put it in the bag and the bag in the trash. If it’s in plastic, it’s not biodegradable anymore.

On why people litter

I try to give people the benefit of the doubt. Most of it’s unintentional and micro-trash, the stuff people don’t realize they dropped: water bottles, wrappers and items that fell from their pockets.

I also think people don’t fully realize the impact of their actions and its impact on wildlife. They think things will just dissolve magically and go away. It’s not just something unsightly, it’s actually degrading the place where we live. If trash cans are available, I wonder why they aren’t being used. Some of it comes down to education and enough resources to throw trash away. A lot of people just don’t want to carry the trash out with them.

We found some weird and unexplained things that were just out of place. I’d think, “How in the world did this get here?” They’d be a random sock in a tree, old car parts, biohazards that were pretty yucky, or a diaper in the middle of nowhere.

Reflecting on how much trash my family and I produce was also unexpected. It forced me to look long and hard at how long I use something before discarding it and how I can reduce the waste I produce and properly dispose of it. It has made me more curious and passionate. 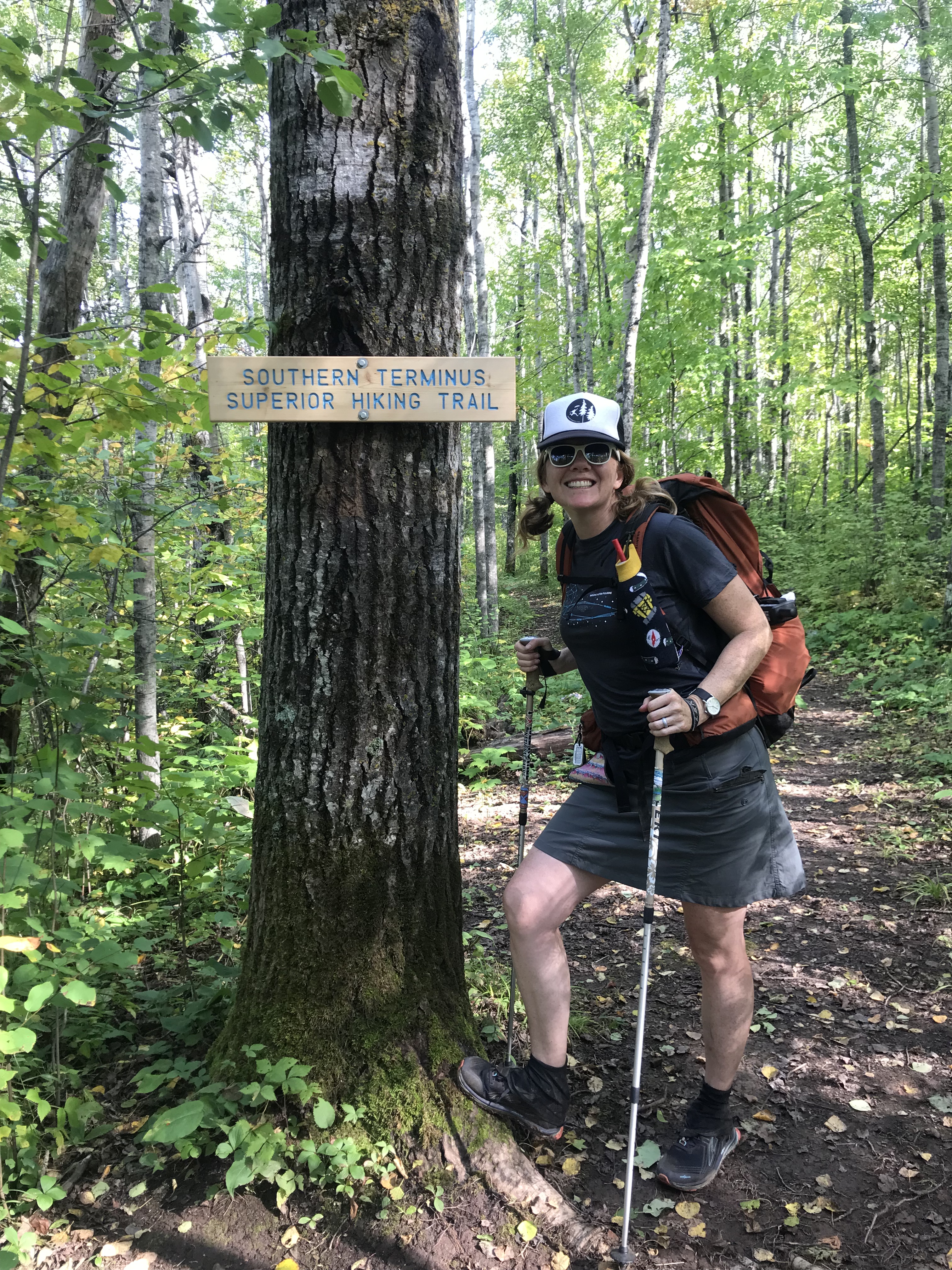 Jen Theisen completed a thru-hike of the Superior Hiking Trail — one of her targeted domains — this summer.

This made me feel like I’m doing something about it. I had a tendency to maybe stick my head in the sand or feel like the issue is overwhelming and getting worse. But taking time to pick up and be aware of what a simple act can do is actually making me feel better and care more instead of walking past it and being mad. I’m making a dent.

I’ve met kind and courteous people on-trail who have thanked me, even though I never needed to be thanked. I also have several friends who have hiked with me who now pick up trash on their hikes. They see it makes them feel good, too. They’re not part of any program.

If you’re waiting to do everything perfectly and be a perfect recycler or a perfect environmental steward, don’t wait. Just do something small, because it can ripple and open opportunities for more. Picking up that one little piece of trash is better than not picking it up at all.

Scott Stowell is a freelance writer and photographer from Ely. He can be reached through writingoutfitter.com.

The snow hasn’t covered the trail yet here in Minnesota, so we’ll still be out there leaving it better with one more big clean up hike planned at the end of the month.   Do you clean as you go?  Have any questions for me or the other Groundskeepers?  I’m still learning as I go and would like to create less waste, but know little changes (if we all do them together) can have a big effect! 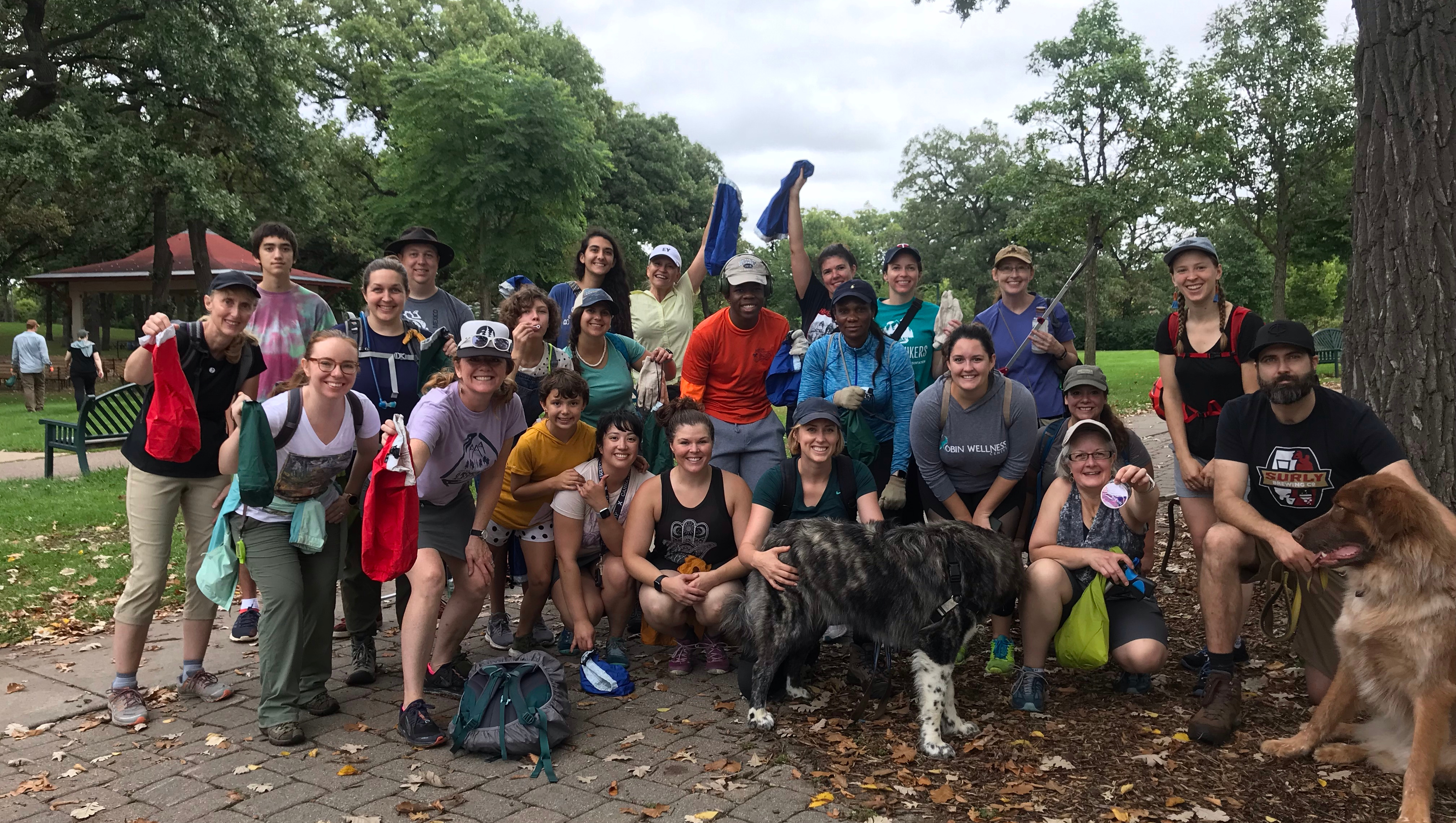 Thanks for reading!  For more pictures of trash and weekend adventures, check out the @wandering.pine instagram on the sidebar and continue the discussion on the Wandering Pine Facebook Page.