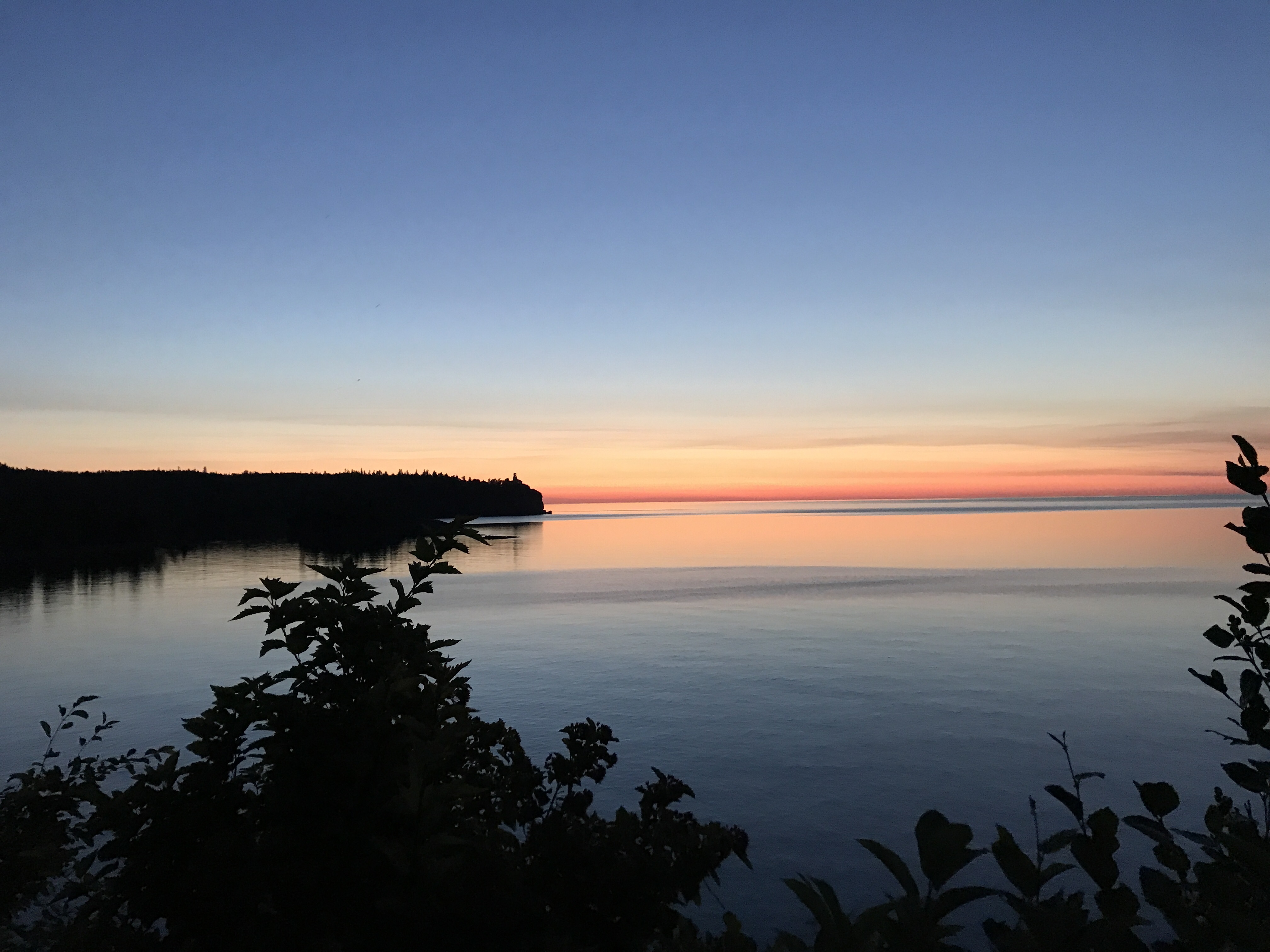 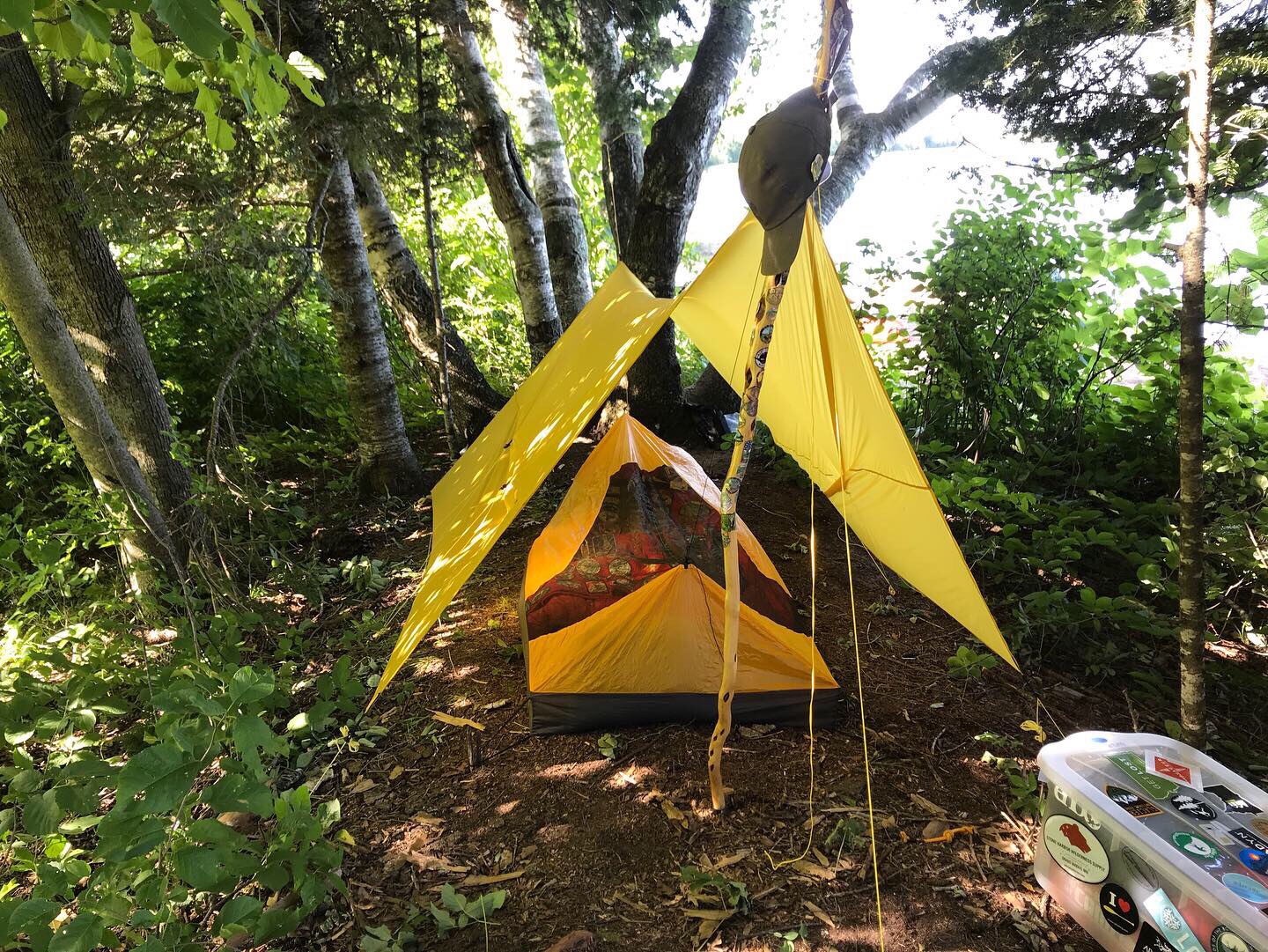 If you have been following the Wandering Pine Instagram, you will see that we just came back from an amazing week of adventure at my favorite Scout Camp in Northern Minnesota.  During the trip, my youngest expressed interest in his first backpacking trip.  I was like: YIPEE!  [headstand] *cough cough* Act cool, don’t scare him off…switching to inside voice…  “ok, cool!” 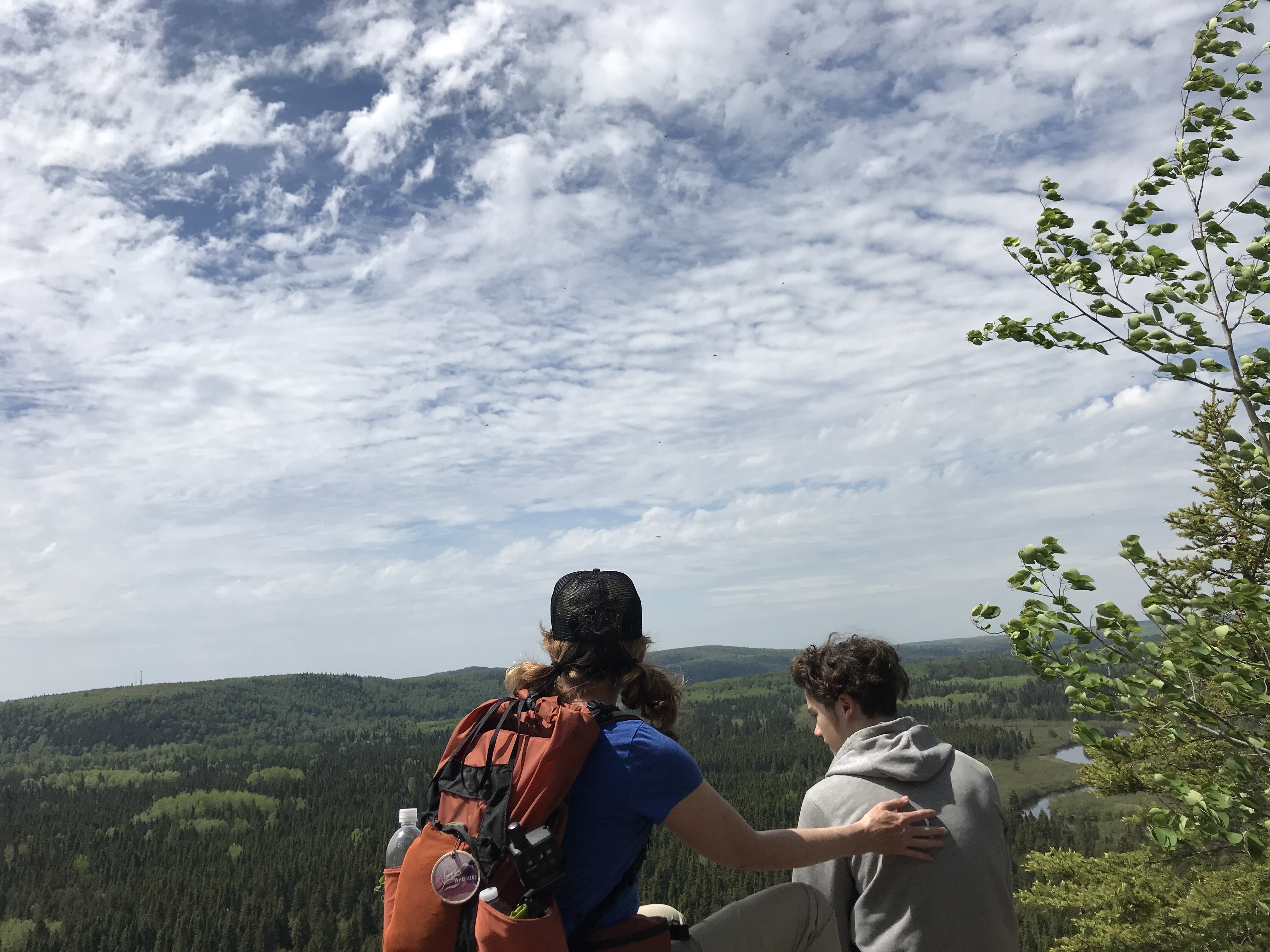 Only a couple of days after the laundry was done and the gear was mostly put away…we hatched a plan to head up to the Superior Hiking Trail and hike Cascade State Park to Lutsen.   This is the 10 mile section just North of the one we hiked together in June.  I had already hiked this section with my sister, but thought it would be fun to do again. 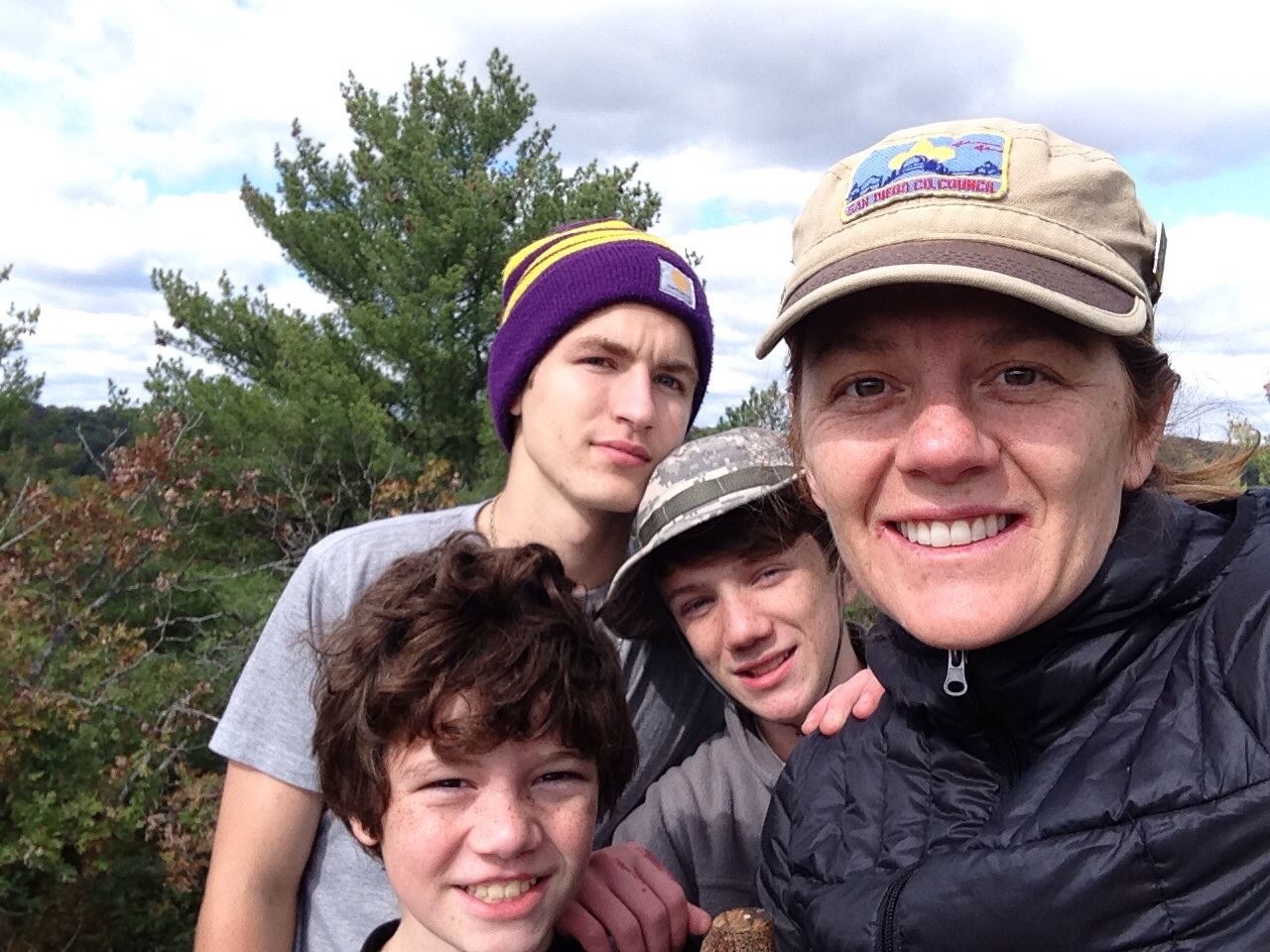 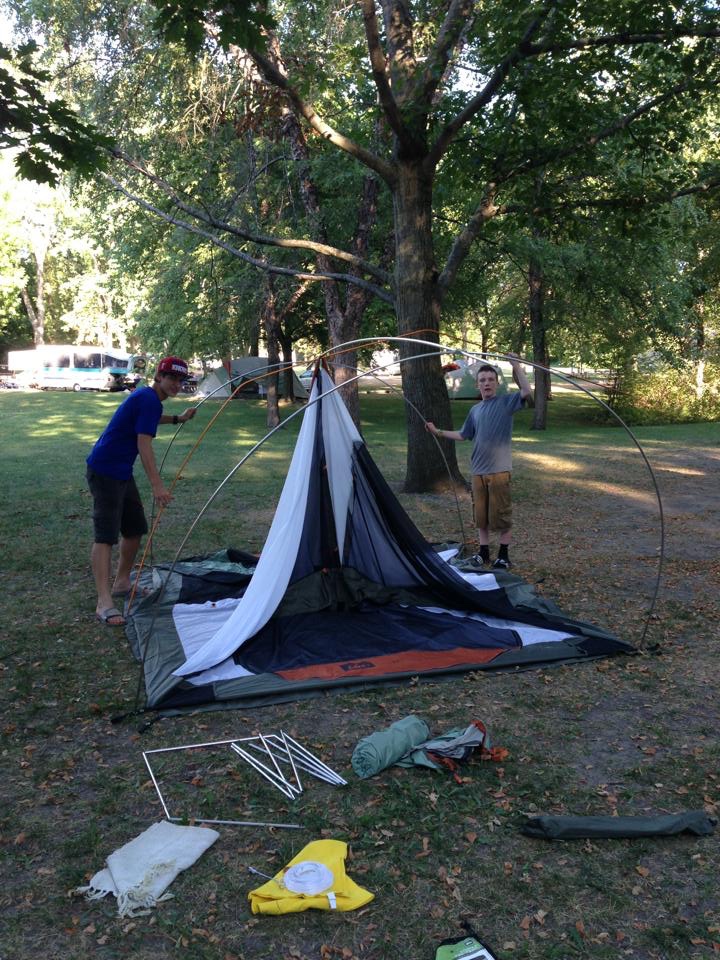 He invited his older brother and a family friend (who is like a 3rd son) and THEY SAID YES TOO!  The 4 of us have camped together many times over the years, and since they have both recently left the nest, it felt like we were ‘getting the band back together’.  I grabbed a bunch of leftover dehydrated food from previous trips (supplemented with a hefty serving of snickers and pop tarts), made a packing list, and we were set to have a great little backpacking trip for 4!

All systems were “go” until Thursday night, when the youngest came down with a bad cold he brought home from camp.  The older guys tried to drag him along, but he was truly sick.   Boo.   The older ones (both adult Eagle Scouts) were not as keen on hiking 15 miles or driving over 4 hours each way to get there, but still wanted to get away for a little while.  They were good sports, but I knew they weren’t really into the weekend warrior thing and usually use their weekends to rest.

So, I accepted the challenge and started looking in to a plan B.  After realizing that EVERY Minnesota State Park was booked, I was pretty sure we were going to have to abort the mission to go up North, head South and snag the super-secret same-day backpacking site at Afton State park. 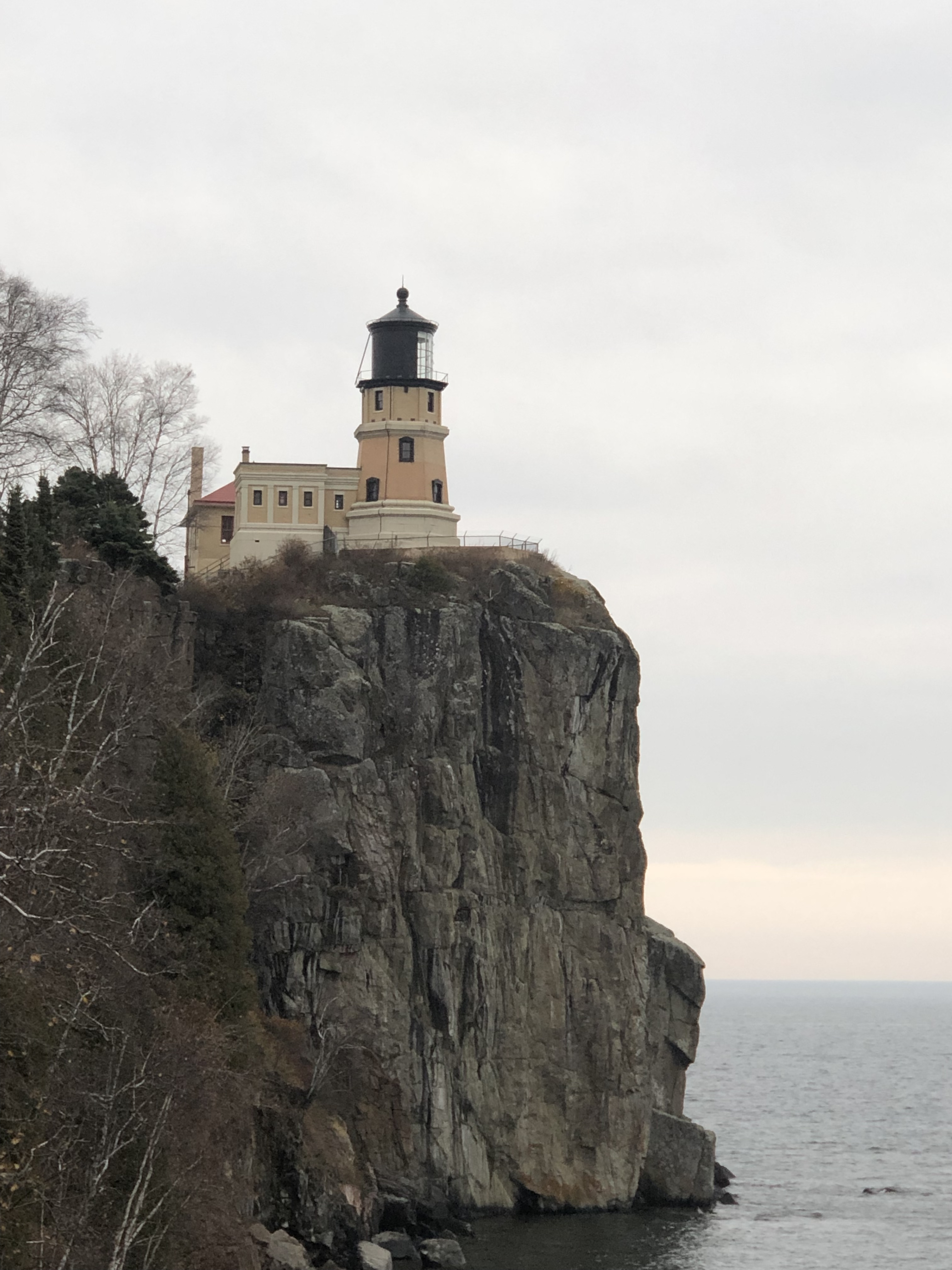 Lo and Behold! [angels singing]  Someone cancelled their reservation in one of the most prime spots on the North Shore!   Campsite 18 at Split Rock State Park… with a view of the LIGHTHOUSE!  I texted the boys, and we scurried out of work early to attempt to beat traffic!

Lesson #1:   There is no escaping traffic on I-35 heading to or from the North Shore in the summer.   Ha! 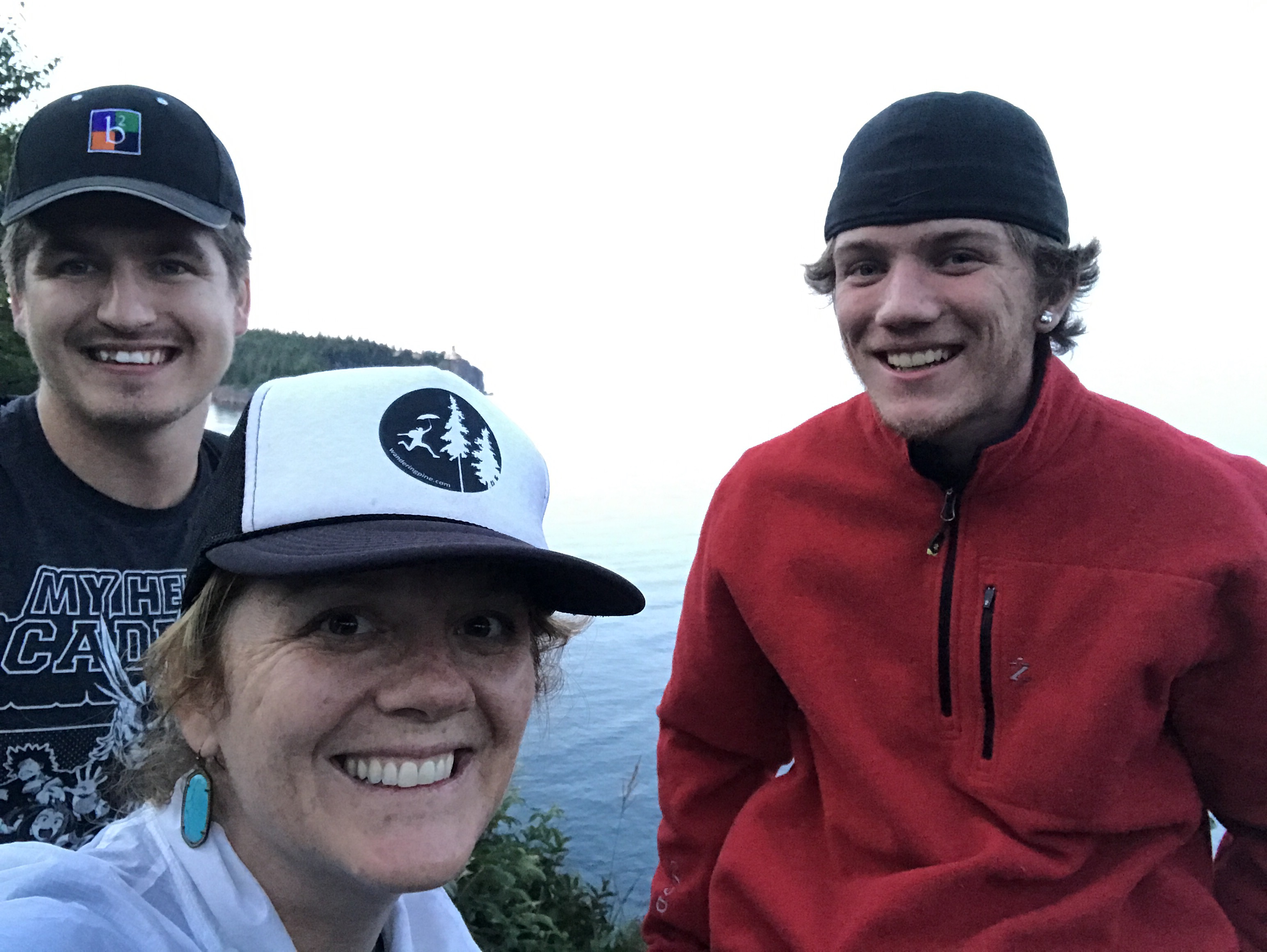 We arrived at sunset, just in time to walk the 1/2 mile into camp.   Carts are available, but we were glad everything fit in our backpacks and we didn’t have to haul in a bunch of gear. 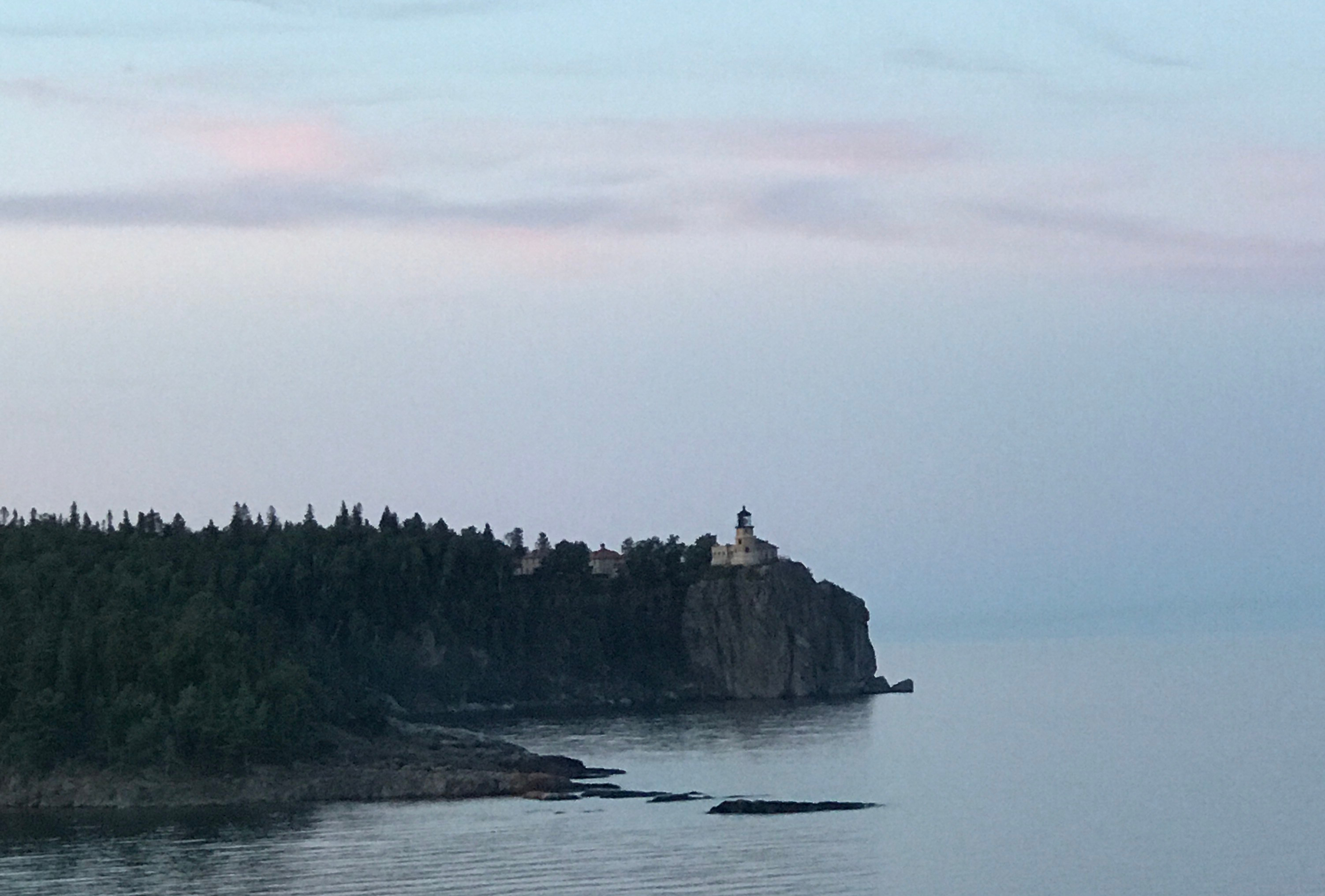 We dumped our gear on the picnic table and headed straight down to explore the two cliff-overlooks within the site to enjoy the view of the lake before dark.  We talked about all of the ships that come through, wondered what fish were swimming around in it’s clear waters and tried to estimate the depths of the water we saw straight down below. 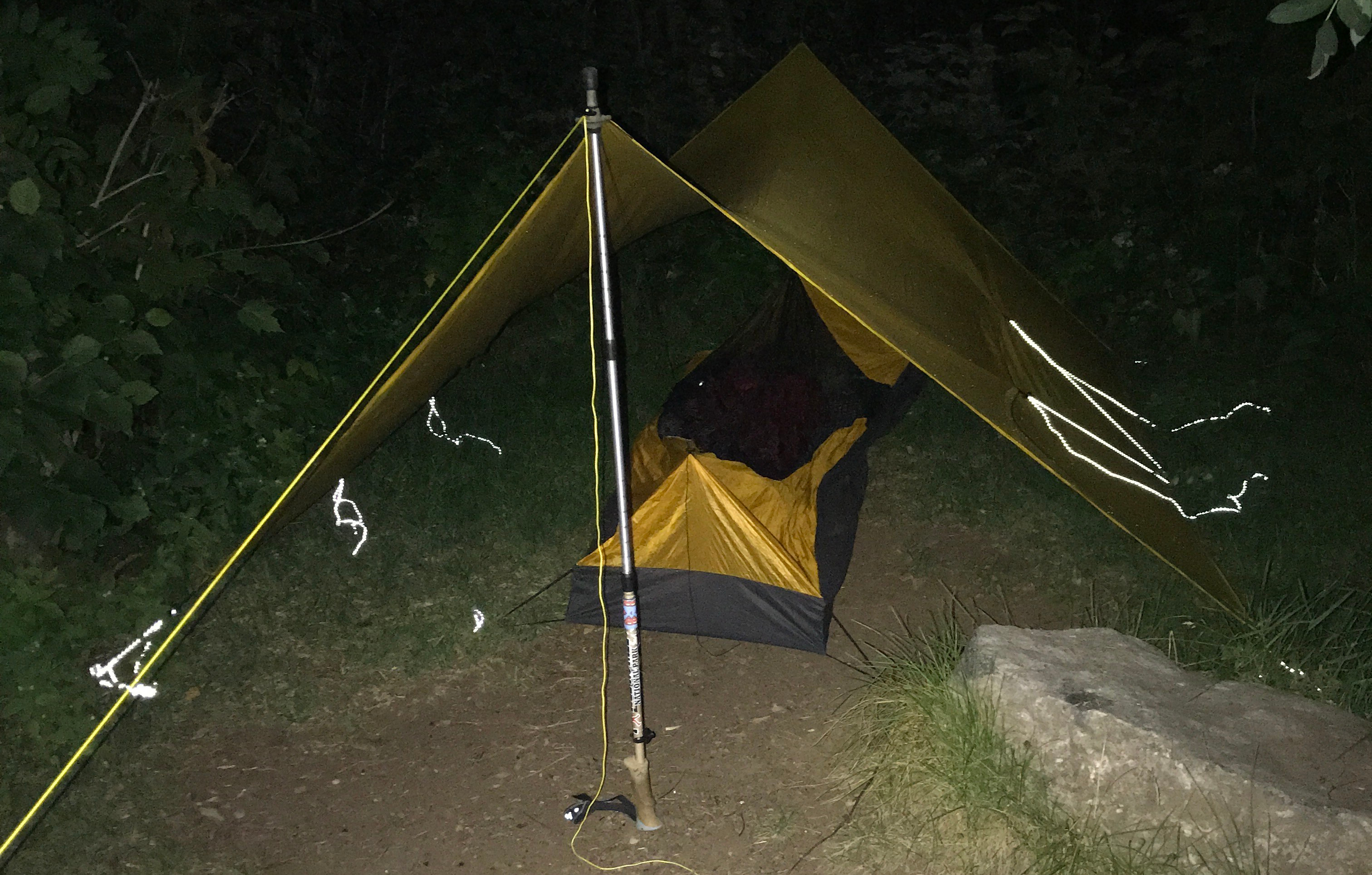 The bugs found us just before dark and they were hungry.   I tried lemon eucalyptus oil as a repellant because I couldn’t find any Picaridin any of the stores I hit before the trip.   It worked pretty well, but the bugs were kind of everywhere and in our faces anyway…so I set up my bivy super quick and just decided it was ok to go to bed.

I read for a little bit and heard the boys talking down by the cliff.   I don’t know how long they stayed up, but I popped in my earplugs to drown out the sound of Hwy 61 and fell asleep fast.

I woke up before the sun, and hurried out of bed to catch the sunrise.   One of the benefits of going to bed early and sleeping in a shelter without doors, I guess.  I remembered the incredible sunrise from Crazy Bay, the last time we camped here in the Spring, grabbed my quilt, coffee supplies and ran down the little trail to our own private overlook and sitting bench. 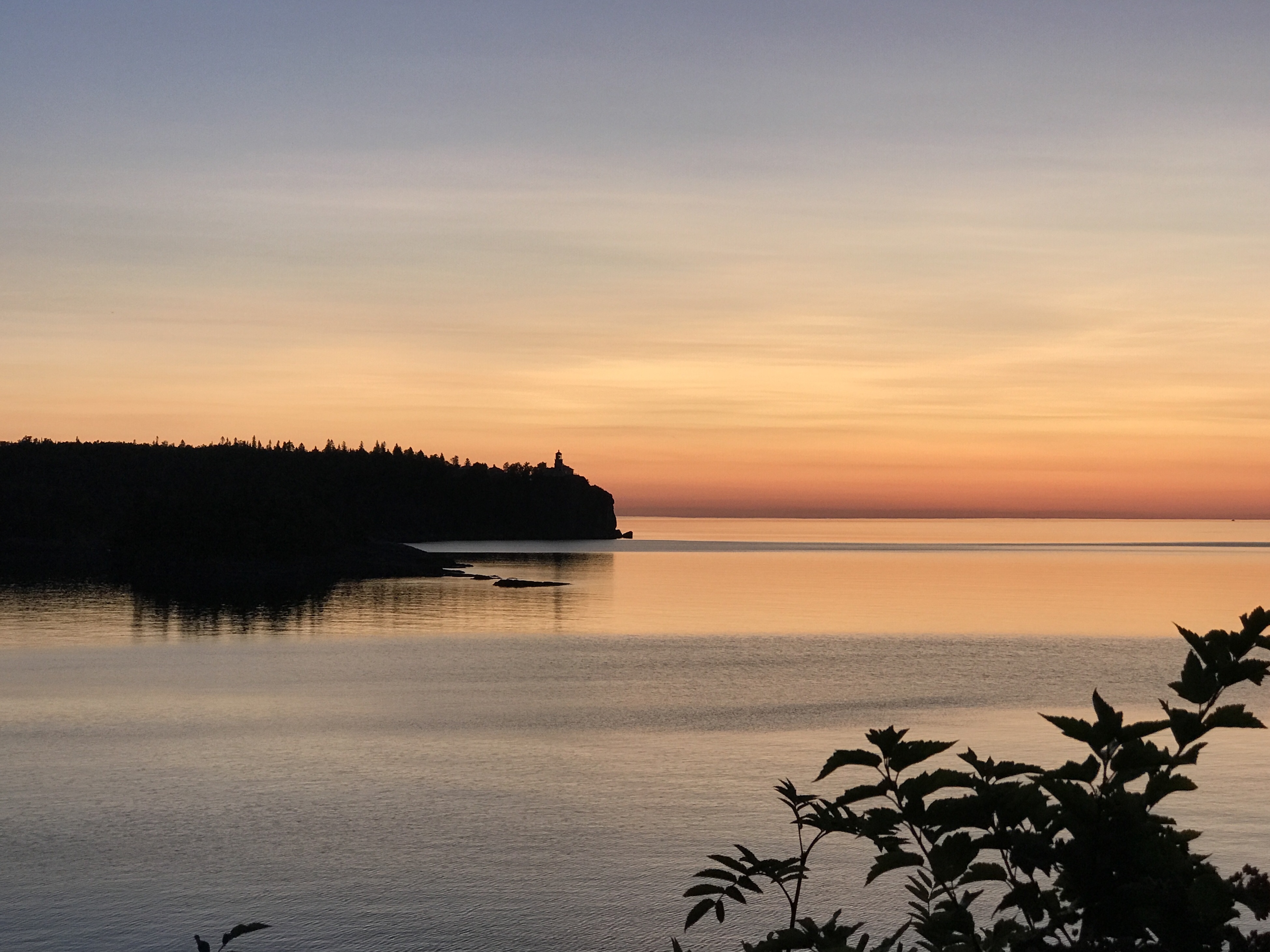 There is some thing so absolutely captivating about watching the sun rise over the uninterrupted horizon line of Lake Superior.  Its like a magnet, drawing me…my eyes and brain straining to comprehend its beauty! 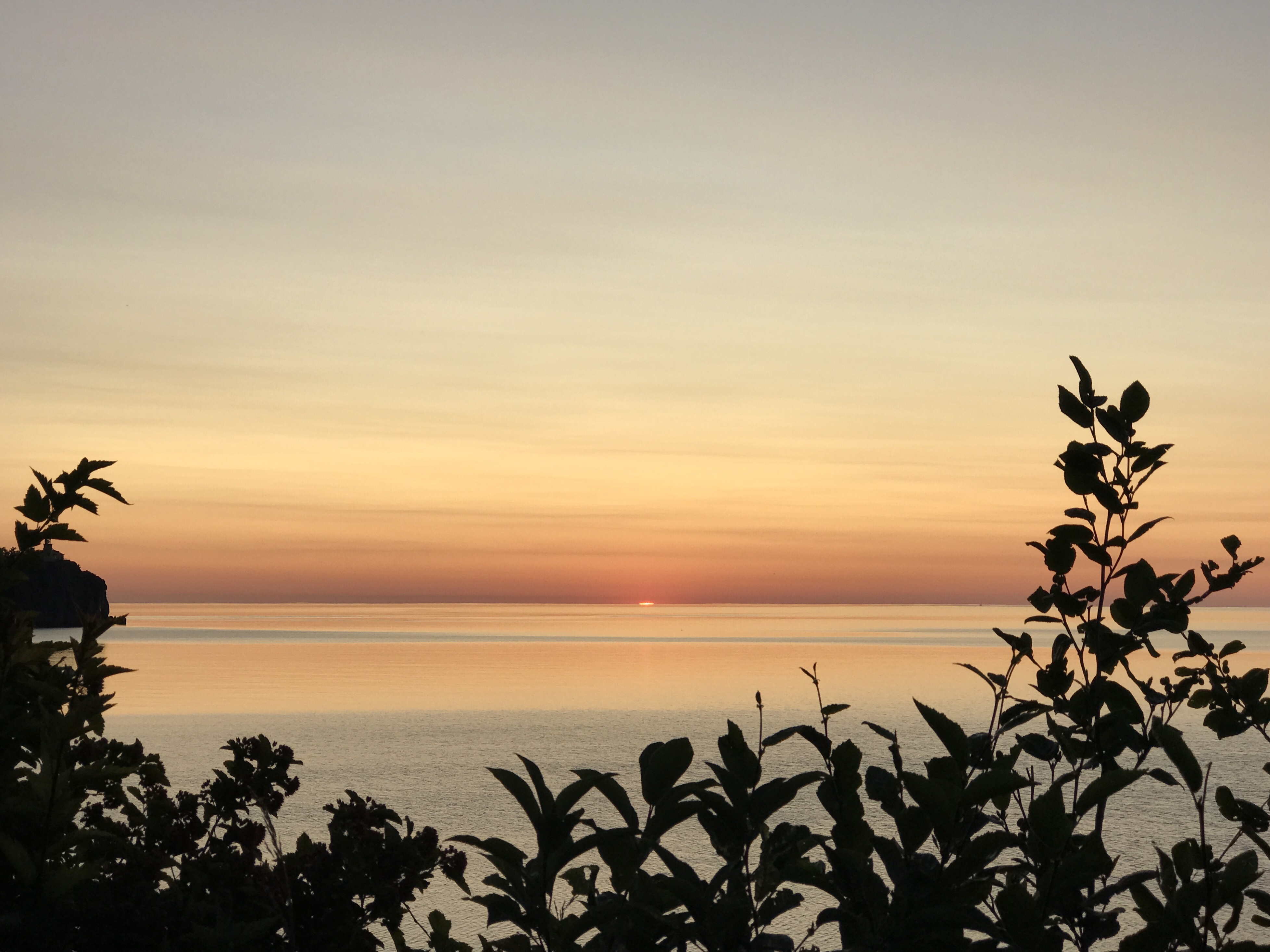 It was still dark behind me, and the rainbow horizon was starting to brighten.   I looked again and again to see and understand the horizon line and I saw what I thought was a ship, glistening with light in the distance.   A little golden ship, that the sun was just starting to hit.  No picture could capture this perfect little golden ship… 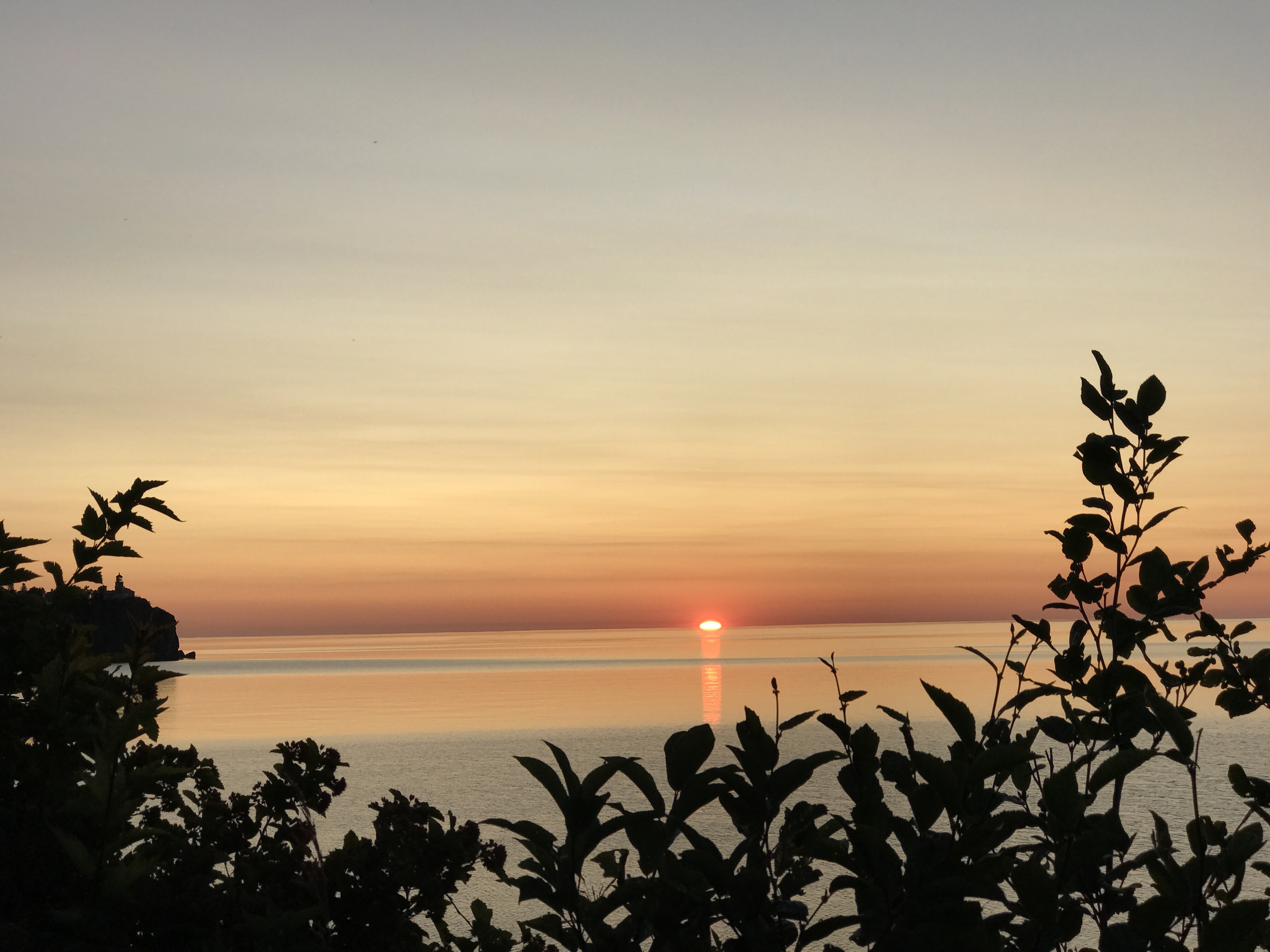 Then, rather suddenly, the ship turned into what looked like a flat egg yolk.   It wasn’t a ship at all!   It was the sun!   The sun is here!   I felt excited and wanted to holler and wake up the boys, but I thought they would think I was just a crazy old lady and I left them alone.   Just me, the Lady Superior, her Lighthouse watchman…and the beautiful sun. 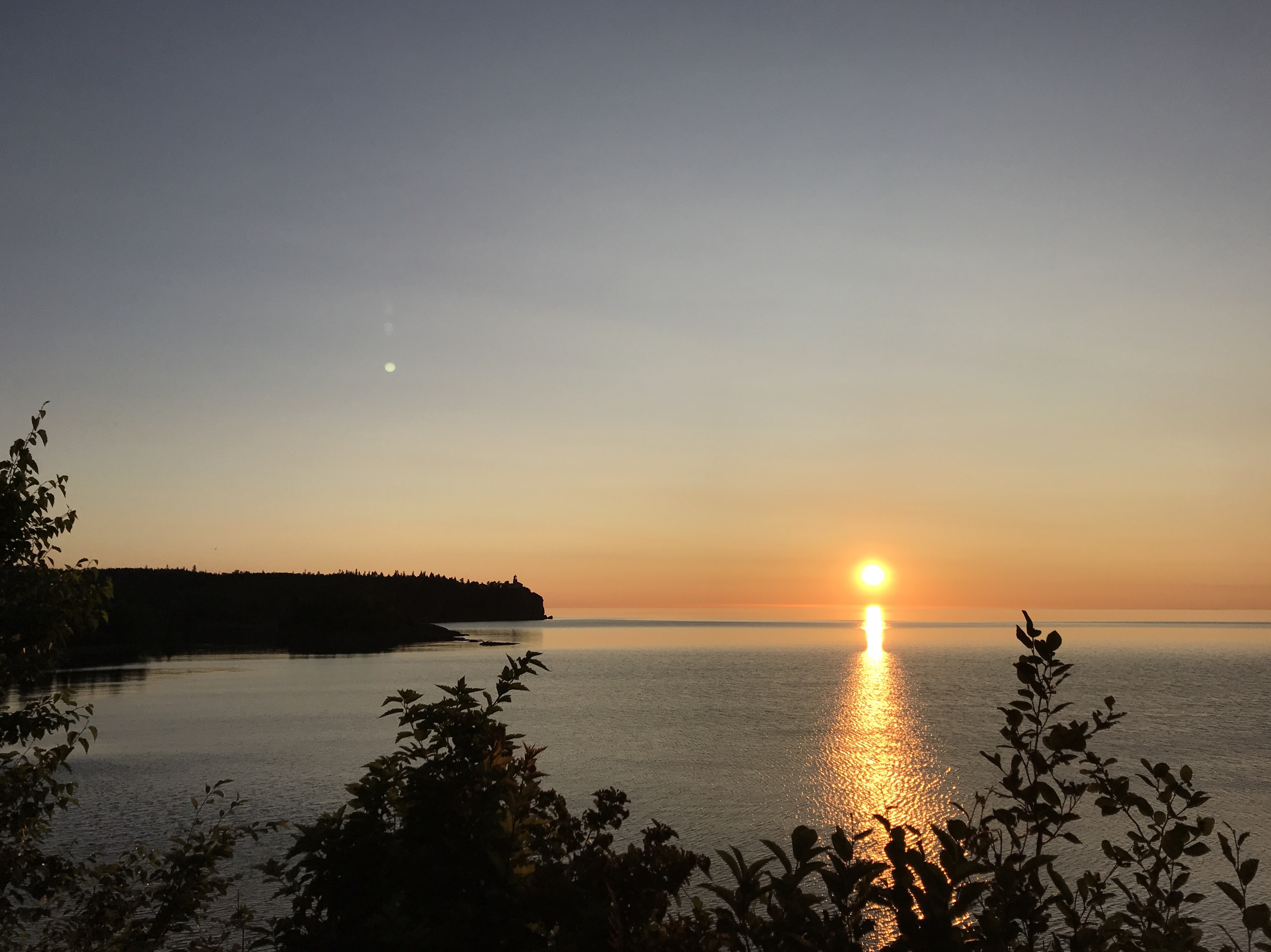 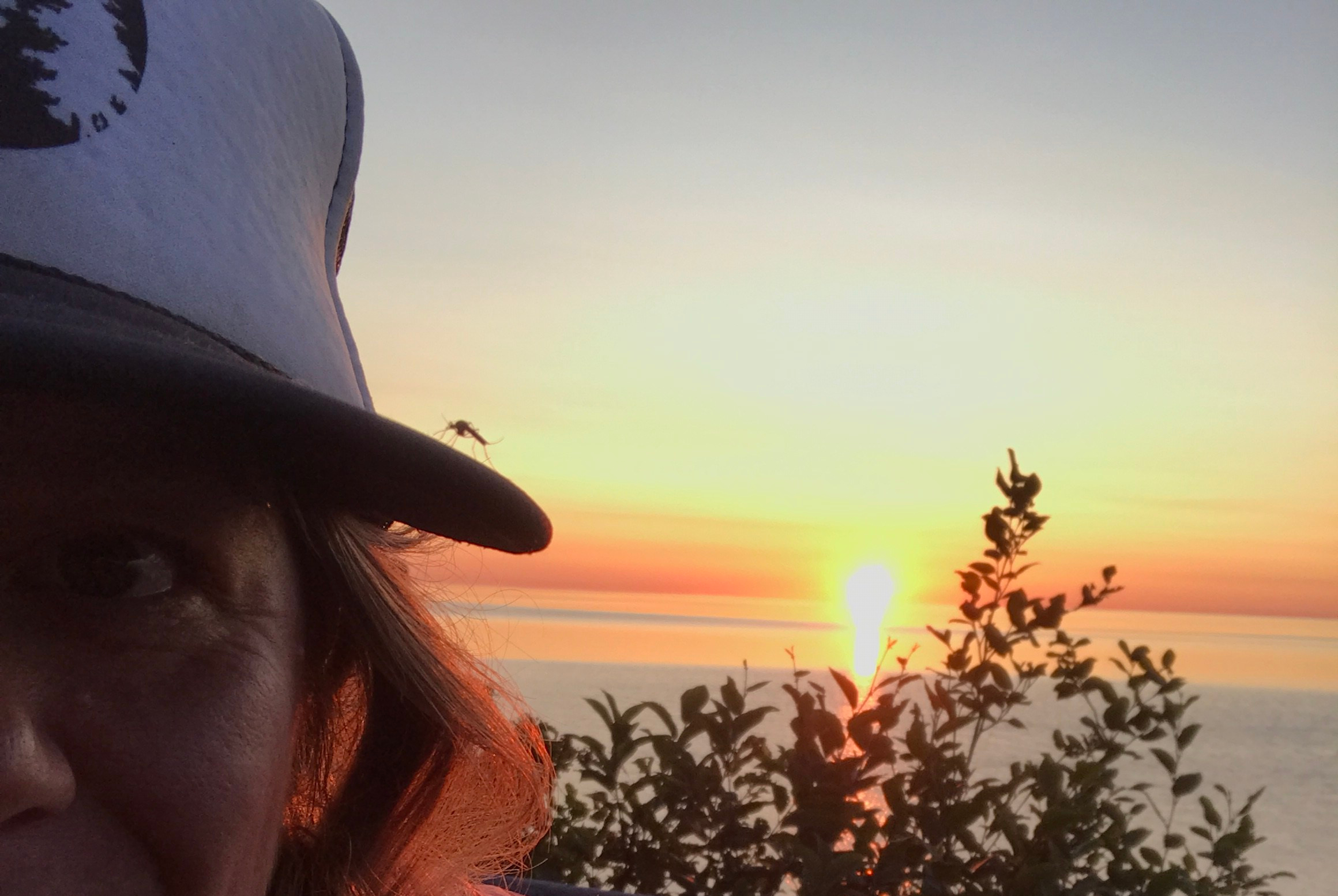 I sat out there for a couple of hours, looking at the sun’s reflection on the water, not really thinking about anything.   Just being. 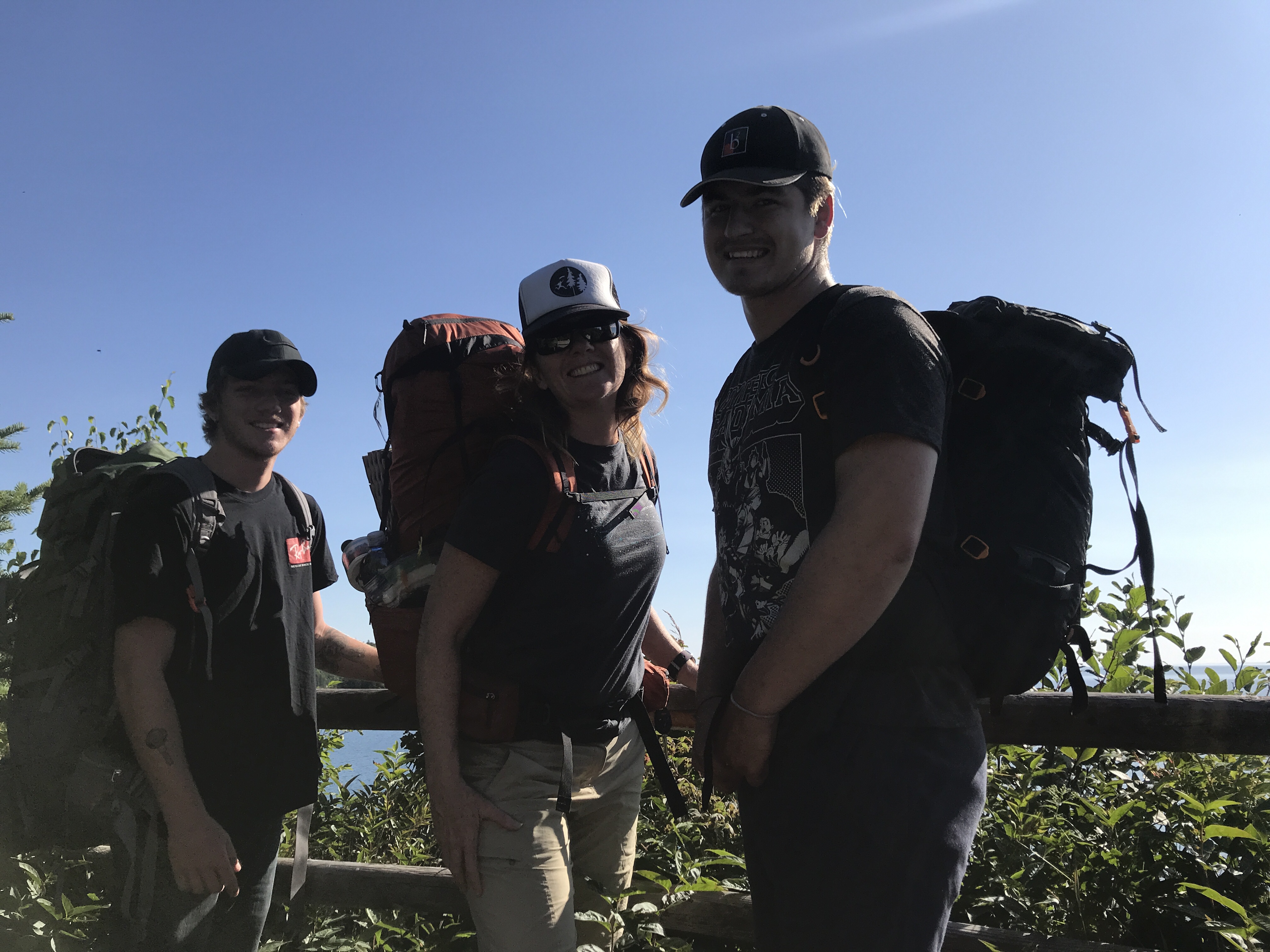 Once the guys got up, I pulled out the map and told them we didn’t need to drive up to Lutsen and backpack 15 miles unless they wanted to.   We had a perfectly good trail that came right out of this park and connected to the Superior Hiking Trail that we could either day hike, or sleep on one more night.  They seemed a bit relieved, as they both had some personal things come up back at home that they were needing to get to, and weren’t as excited about backpacking without little brother. 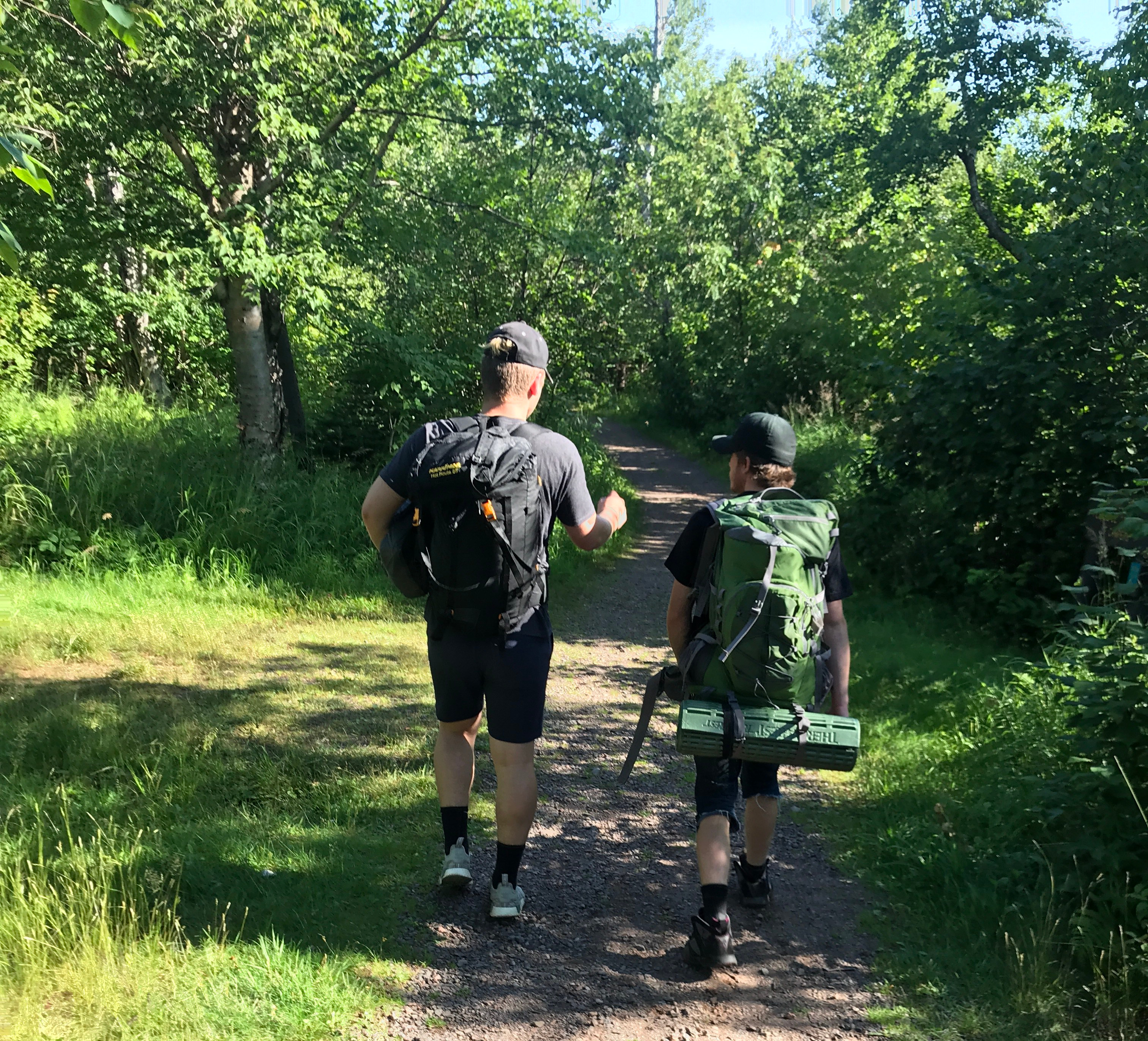 We packed up quick, ate crushed pop tarts (clif bar for me) and said goodbye to our sweet campsite just as the sun was starting to get hot. 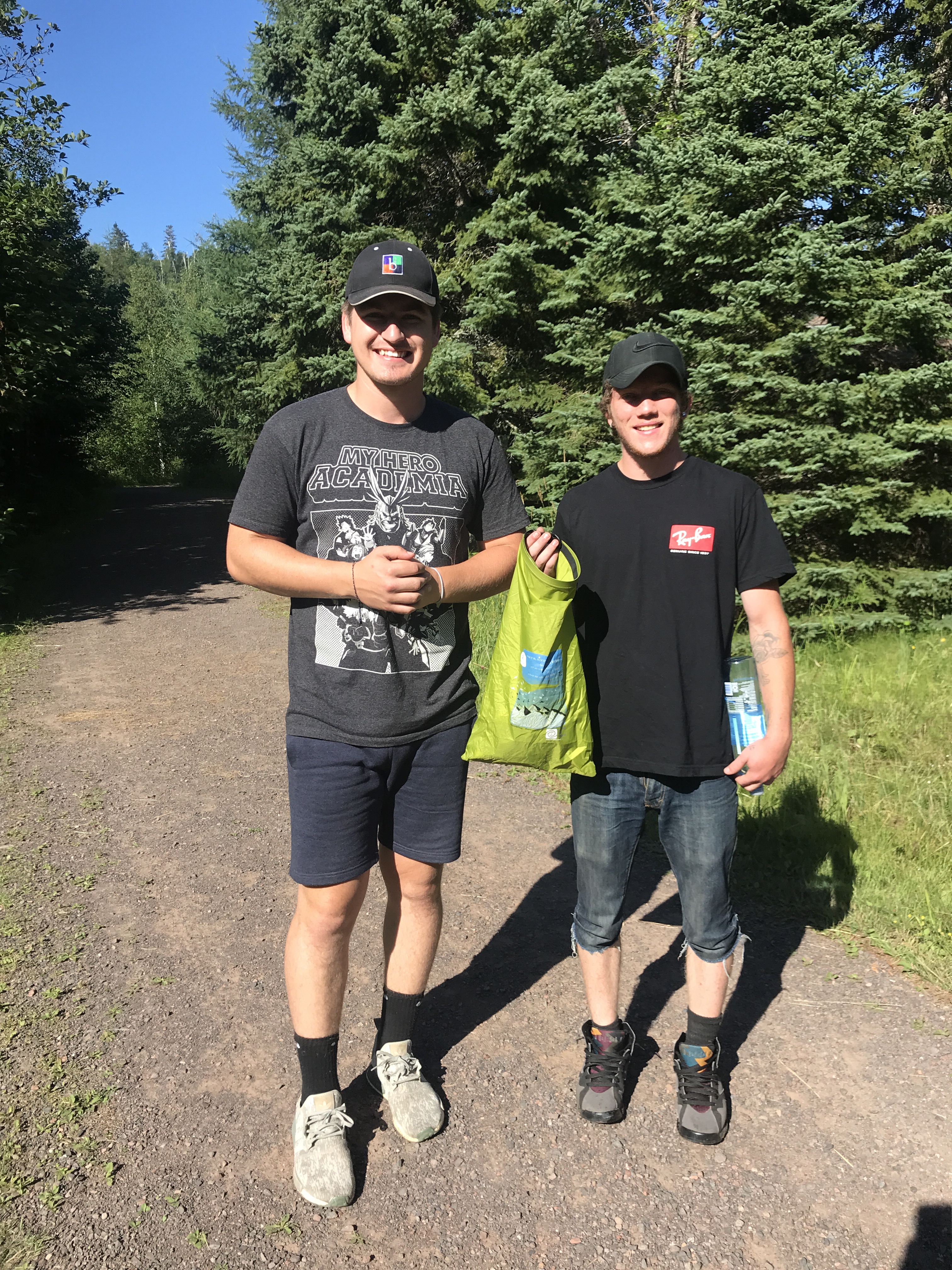 We did a quick sweep of the trail and the trailhead, collecting about 1/4 lb of trash.  Most of it was right next to a garbage can, very little on the actual trail. 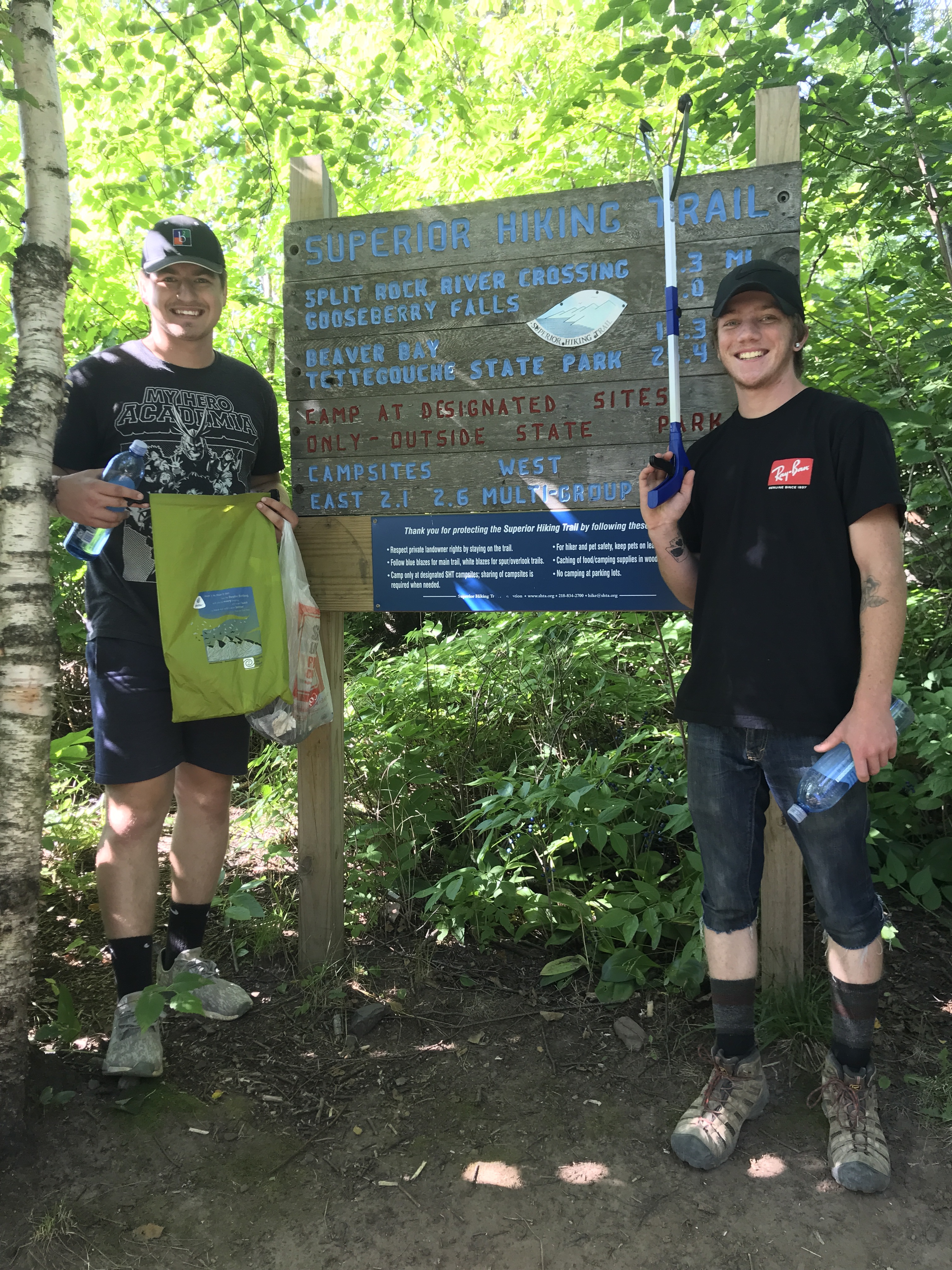 We could have hiked to the loop from the campsite, but we decided to dump some gear and start off at the Split Rock Wayside trailhead.

The loop has been closed for a couple of years now due to a flood that knocked out the bridge.   Hikers can hike either side, but crossing is unpredictable.   It could be a trickle or a raging river.  We detoured around it on our 50 miler in May because it was so high.  We had loose plans to cross it today if it was low, but were also ok with an out and back if it meant more time to enjoy the trail.

It was starting to get hot and I didn’t have the map of this section with me.  So we filled water bottles, made sure the water filter was in my loaded pack and decided we would hike for about 2 hours and start to head back home.

We found a lot of trash right away at the trailhead and after picking up half a bag, decided to come back for the rest afterwards rather than haul more with us. 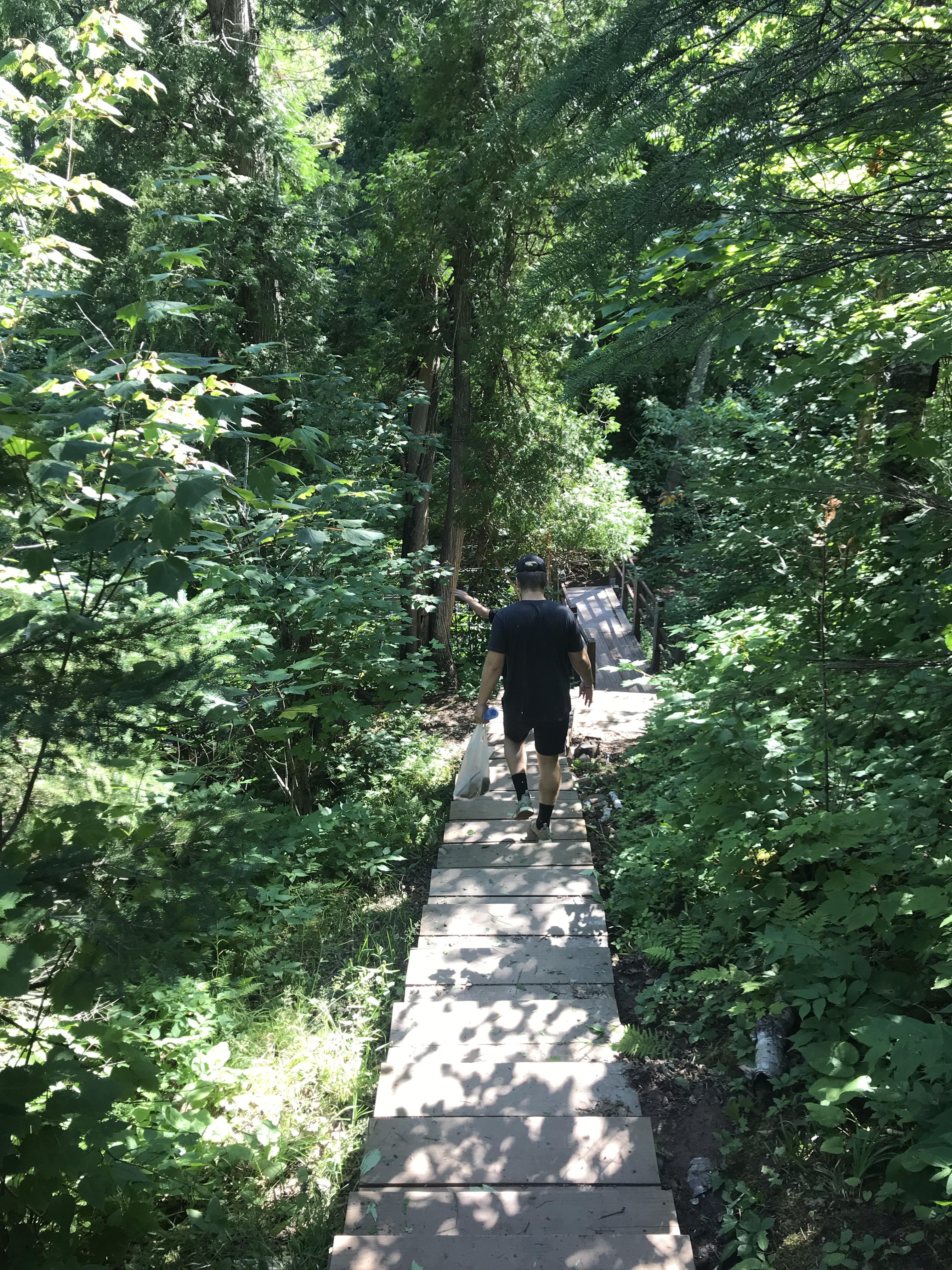 The Split rock loop is listed as a moderate hike on All Trails and starts right away with a bit of a climb.   The trail is wide, clear, full of thimbleberries and raspberries and was recently maintained by some sweet soul with a weed whipper (thank you SHTA VOLUNTEERS!) 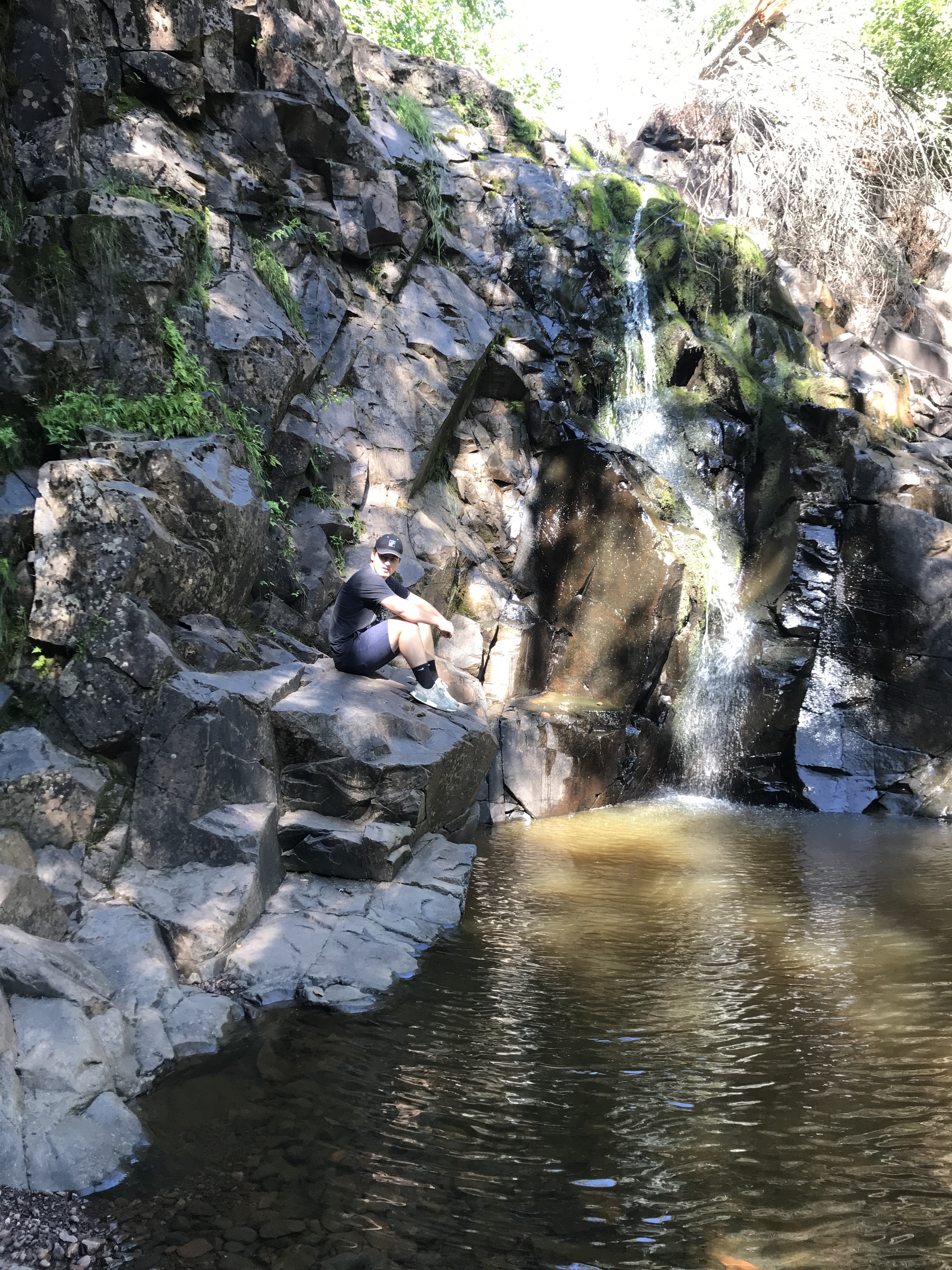 We encountered our first bridge and explored the waterfall area.   It was nice to leisurely wander, appreciating the winding tree roots, climb rocks, and just play a little bit.

We moved forward climbing up and down, following the blue blazes and the sound of the rushing river.  We found a little mud, caught a frog on one of our stops and had great conversations.   We were glad to have brought the garbage picker, grabbing quite a few toilet paper blossoms along the way.   Yuck. 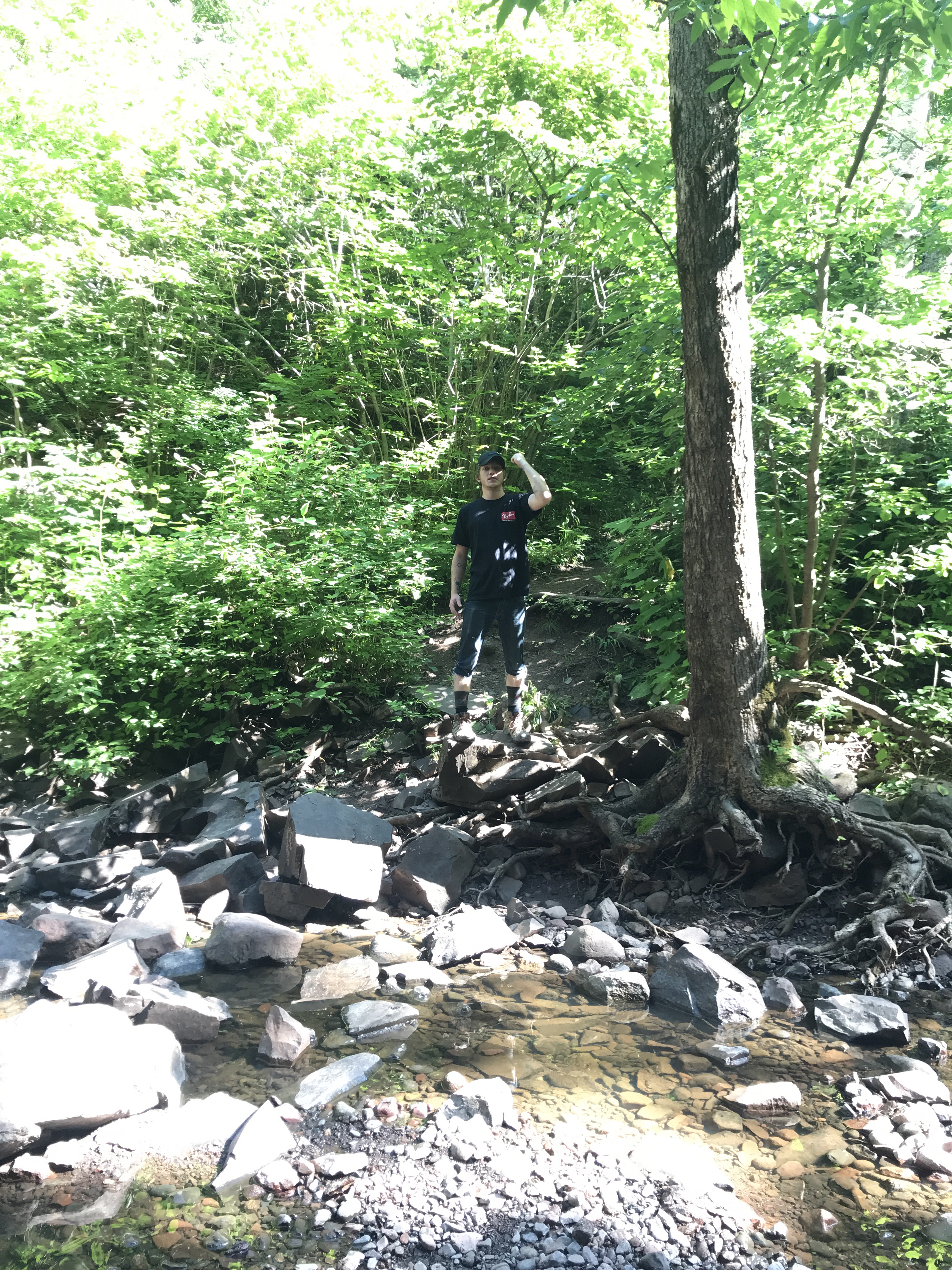 Our hike ended at an overlook of the river about 2 miles in.  We didn’t make it to the crossing, or do the actual loop, so I’m not sure what the conditions were like.  But we were happy with our time on the trail and headed back the way we came. 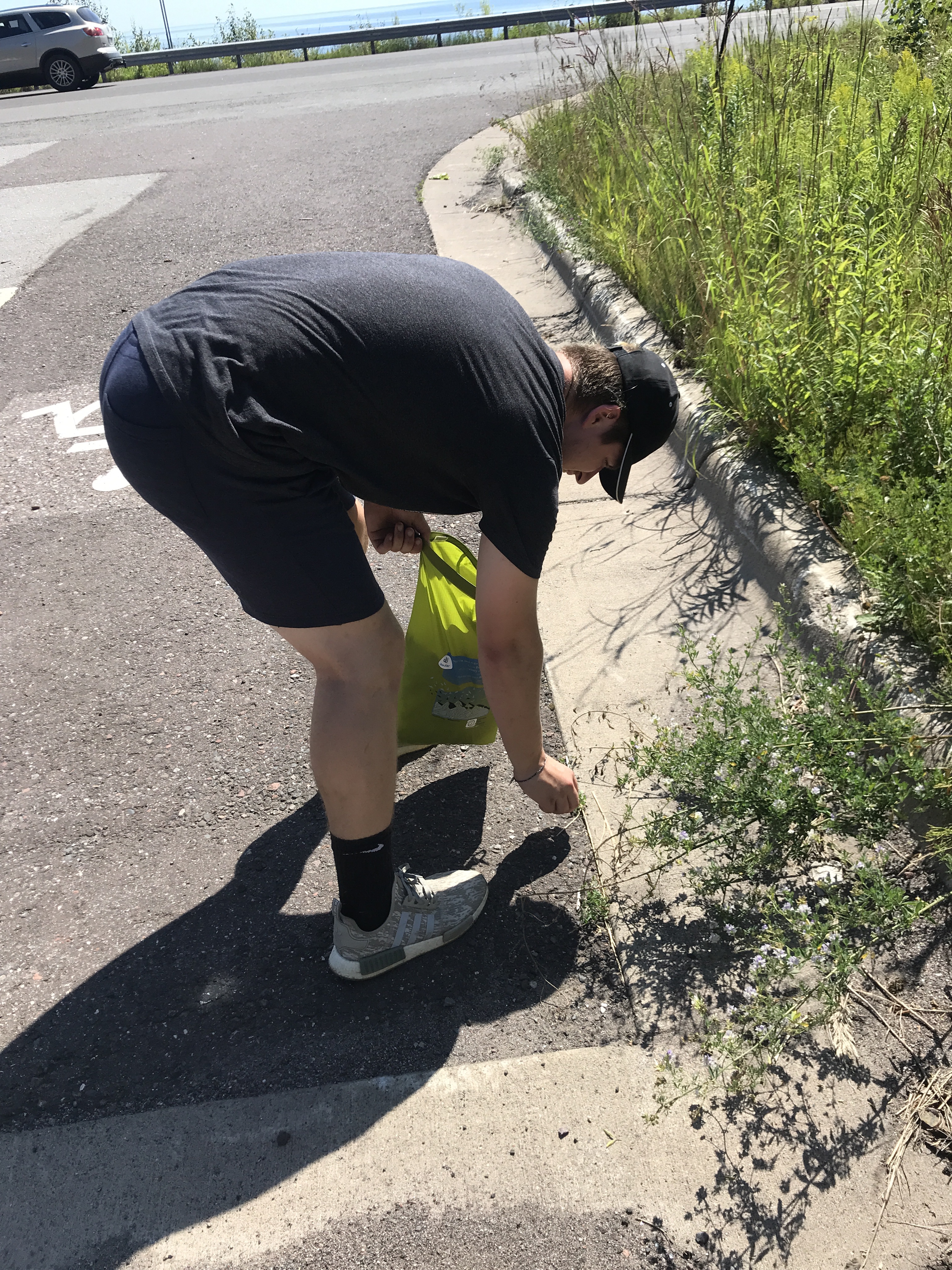 Back at the trailhead, we cleaned up the GROSSEST trash I’ve found since becoming a Granite Gear Groundskeeper.   Toilet paper, dog poop bags, and pee bottles!  Gag.  We collected as much as we could find, used the trash picker and rubber gloves to protect ourselves and ended up with 3.16 lbs of nasty biohazard trash.   This site doesn’t have a garbage can, and probably shouldn’t because of animals…  It is also listed as a wayside, but doesn’t have a biffy, so I wonder if people stop here thinking they can relieve themselves and then discover that there really isn’t a place to do so?  An animal proof dumpster and biffy could go a long way to help this popular wayside out in the summer months, but packing out your trash is always the best bet.  If we can pack out your bio trash, so can you!  It won’t magically go away or disappear…and this wayside is literally feet away from a river and Lake Superior.  Ok, rant over. 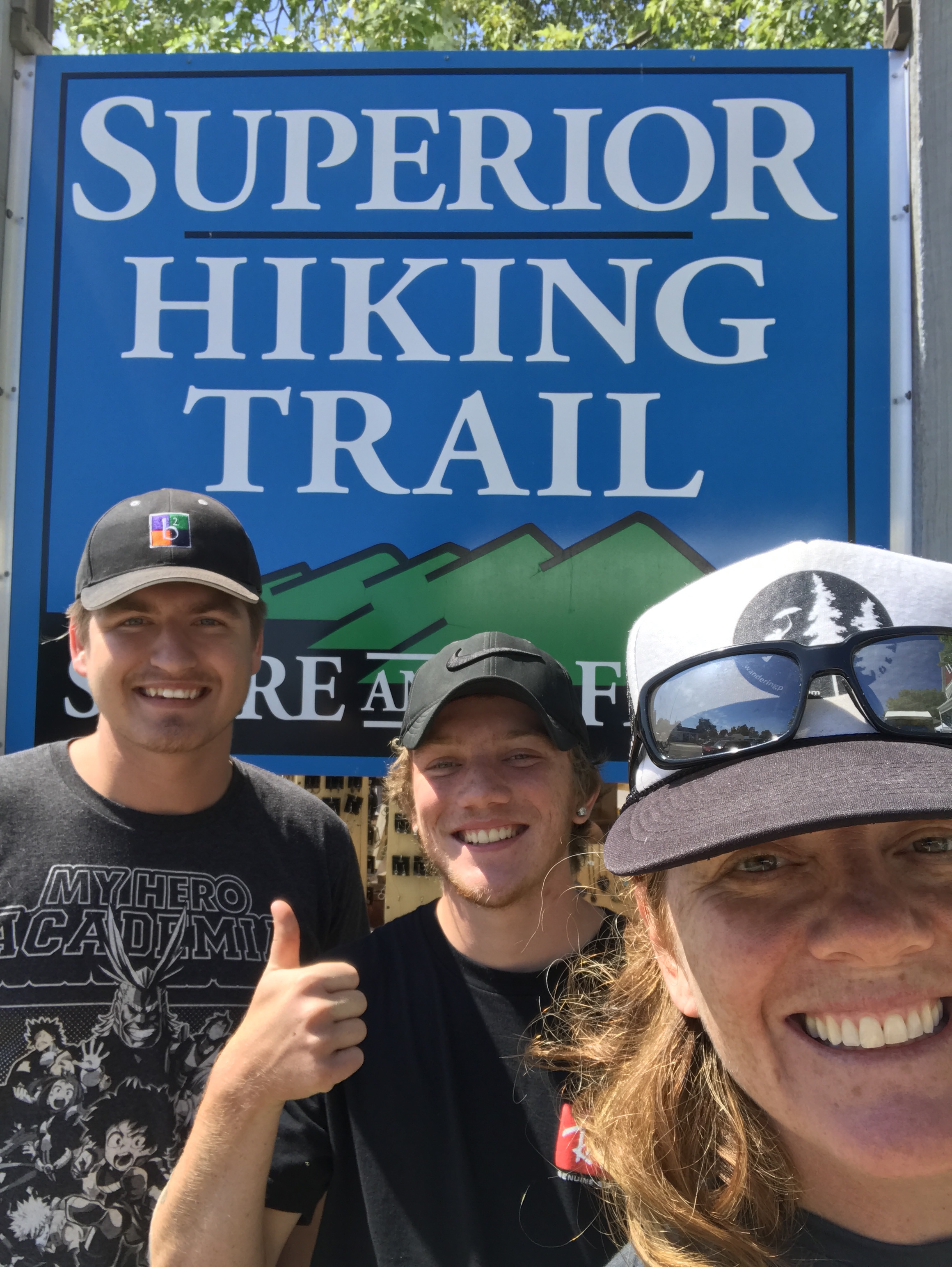 Although our trip was not the one we originally planned and poor little brother had to miss out, we had a great time!   I enjoyed slowing down, being spontaneous, flexible and just enjoying time with these two.  24 hours was just what we needed (and we totally beat traffic home!) 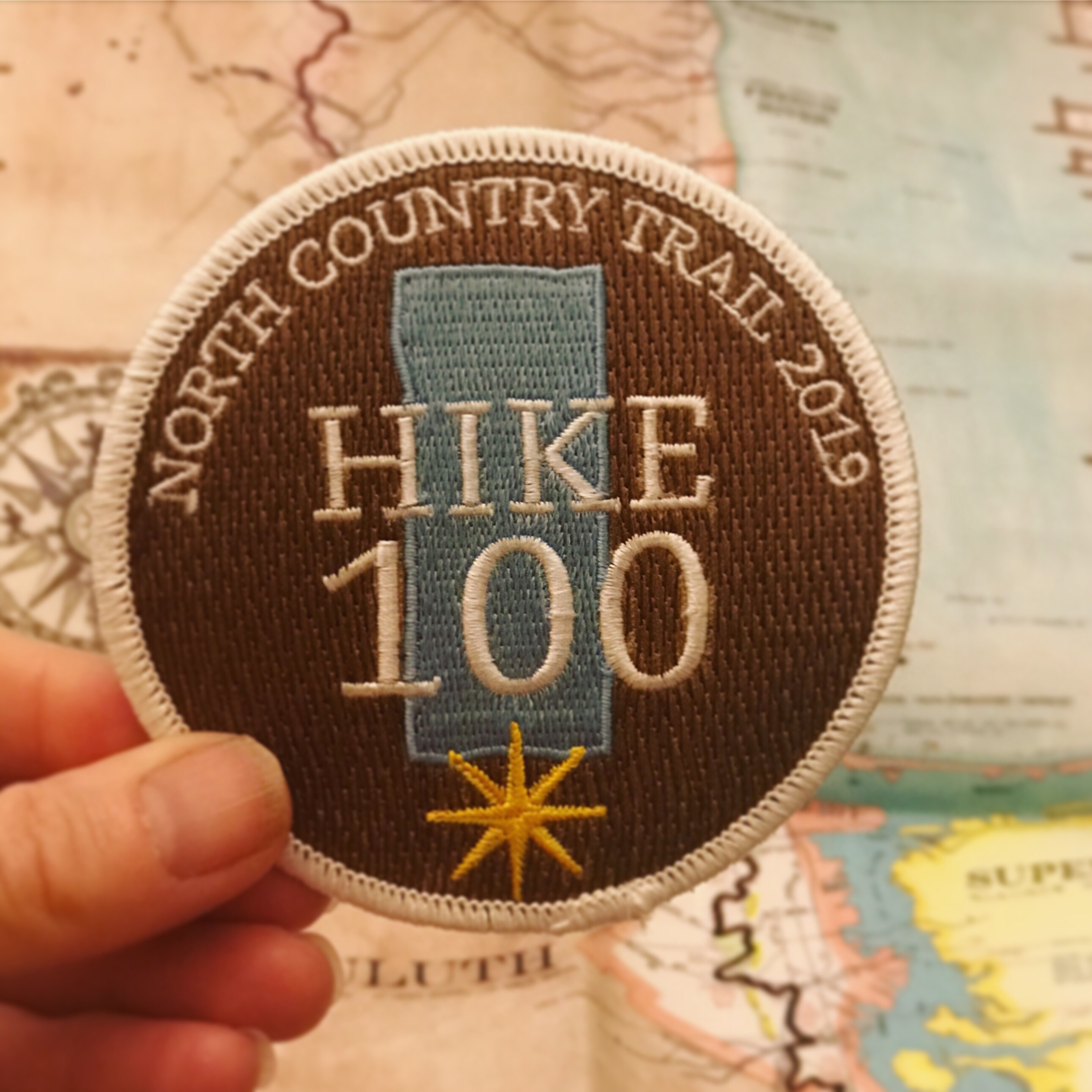 On a side note, look what came in the mail yesterday!  My 2019 North Country Trail 100 mile patch!  I wish they made a 200 mile patch!  This was also my 61st hike of the year and I’ve logged in about 155 lbs of trail trash collected since I started keeping track.   I started with the goal of completing the 52 hike challenge for a 3rd time, but am now shooting for 100.   And the less trash I find along the next 39 hikes, the happier I’ll be! 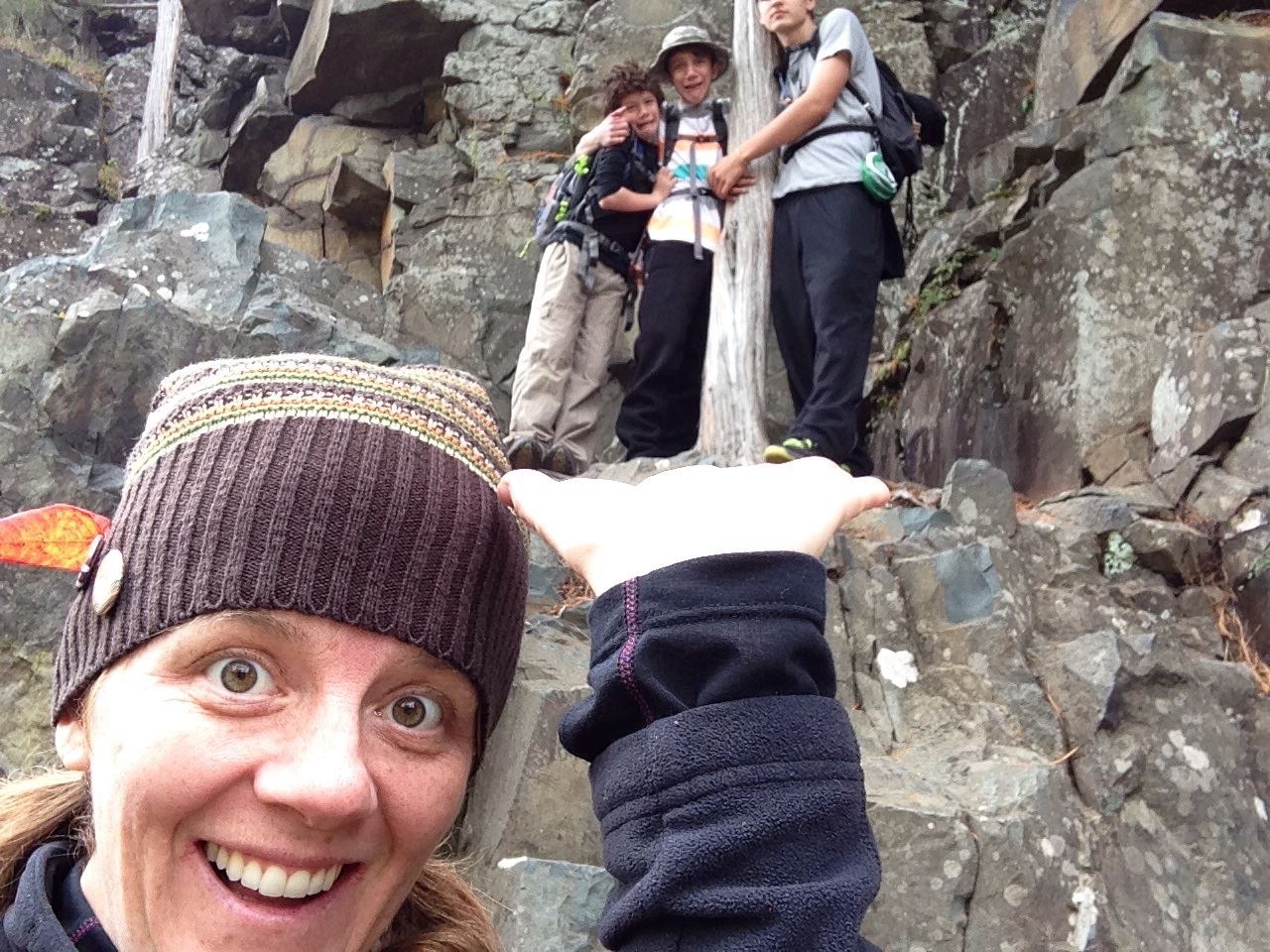 Have you ever had to go to plan B and it ended up being just as good or better than Plan A?  Experiences with spontaneous trips and just winging it a little?  I’d love to hear more about your experiences in the comments below.