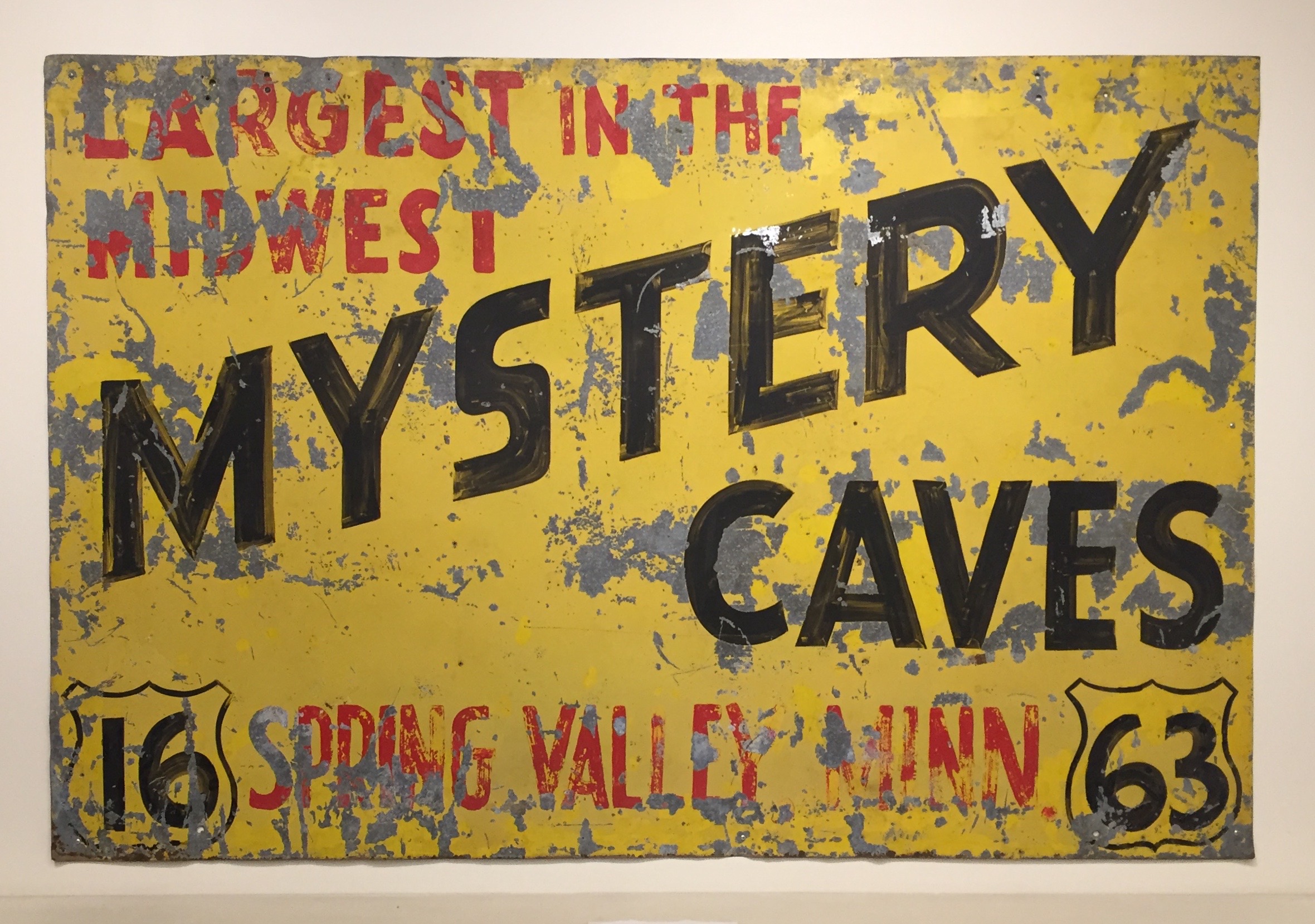 Welcome to part 2 of the Lake Louise/Forestville/Mystery Cave post!  Here’s part 1 in case you missed it!

First things first, lets get to the bottom that mysterious name….dun dun dunn. 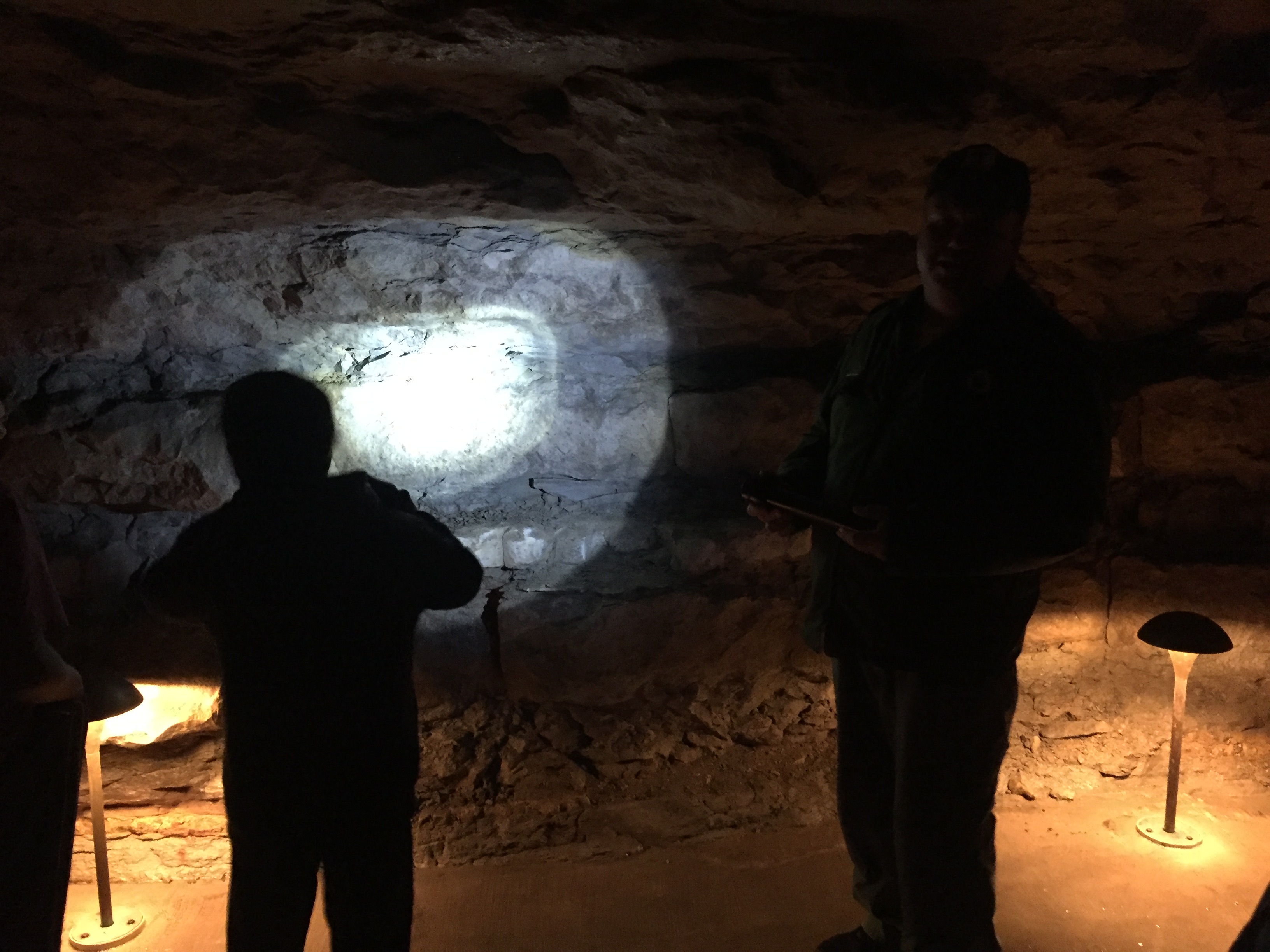 What is the mystery of Mystery Cave?

Before we entered the portal that protects the cave entrance (yes, that’s what it’s really called), I politely asked our fabulous tour guide, Bob when we would find out what the mystery of Mystery Cave was.   He kindly answered and said that back in the 1930’s when the cave was first discovered, a young man named Clarence was working on the cave, hauling loads of rock out in a wheelbarrow.  The wheelbarrow kept tipping over repeatedly….frustrated, he said “why anyone would work in this cave is a mystery”

From that time on, it was called mystery cave.

And, ladies and gentlemen…that is what the mystery of mystery cave is….no aliens, dead bodies, ghosts, strange vortexes of energy, just a guy named Clarence mad at his tippy wheelbarrow.   Poor ol’ Clarence…   It’s a good thing I’m not a tour guide, because I would make up a different mystery every time someone asked me that question!

Mystery cave was discovered in the 1930’s in the winter time by a local resident.  According to legend, he stuck his foot in a hole at about 9pm and didn’t come back out until 5am the next morning!   This is probably a good time to tell you that I saw the movie Prometheus on a 3D TV last weekend and I was a little creeped out when we got in the cave and it looked JUST LIKE THE MOVIE!   I told the scouts not to touch anything that might look like an alien egg or had black goo coming out of it for the sake of the future of humanity.

A mysterious hole, tour guide Bob shutting all the lights off and drinking straw stalagmites.   I found these so fascinating, they are hollow and water drips out of them!   It takes about 100 years for these to grow one inch.   I felt so incredibly young and temporary next to these geological mysteries.

Welcome to the alien underworld.   Right about this time, our tour guide explained that the river is what made this cave and sometimes fills it up.   He wasn’t trying to scare us or anything, but occasionally when the river rises quickly, everybody has to get out of the cave.   Happened earlier in the month…tours cancelled! 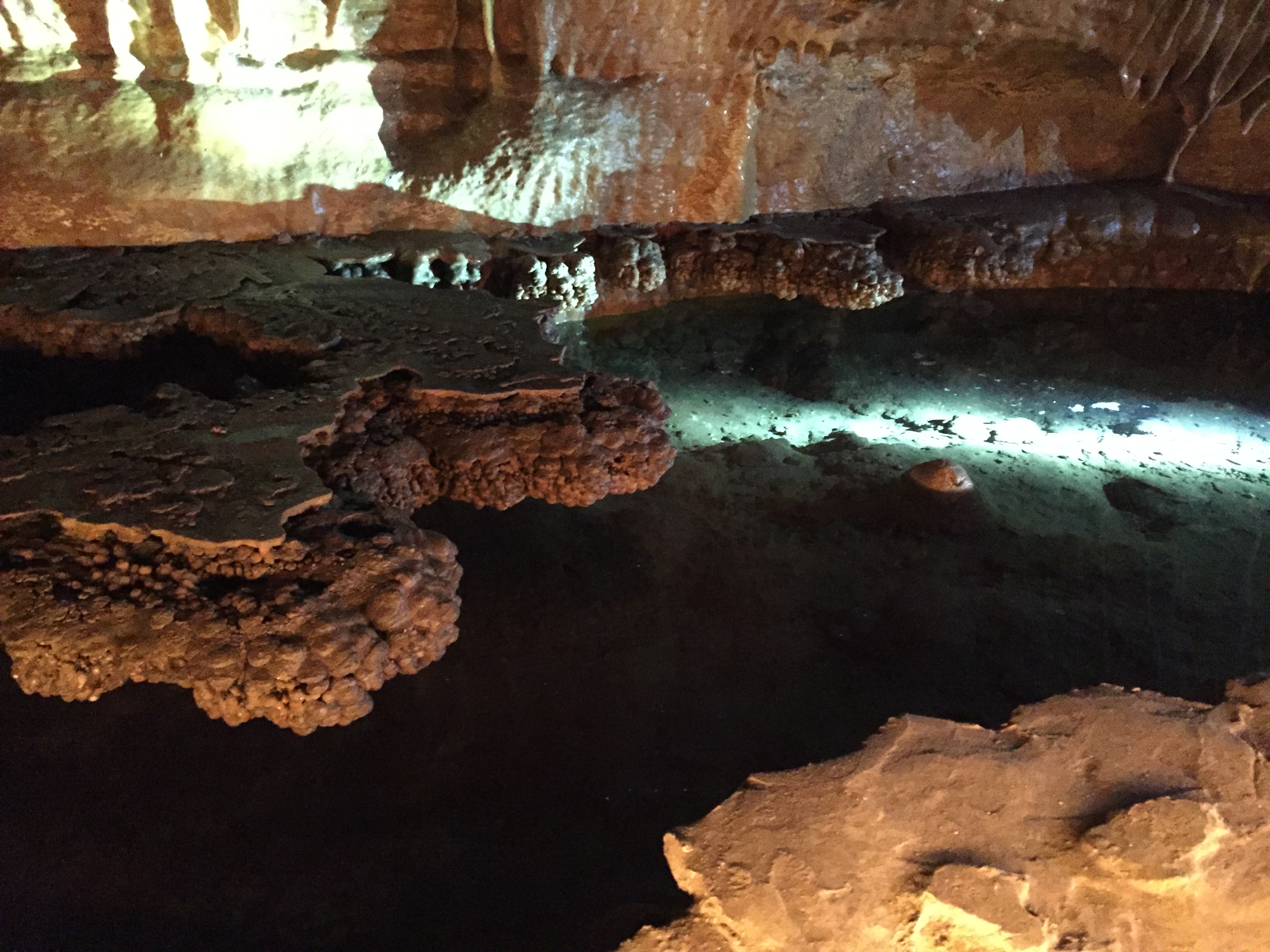 My favorite features of the park were the underground turquoise pools and the sound of rushing water.   Mineral rich and cycling out every 8 hours, the water is simultaneously creating and destroying the structure of the cave. 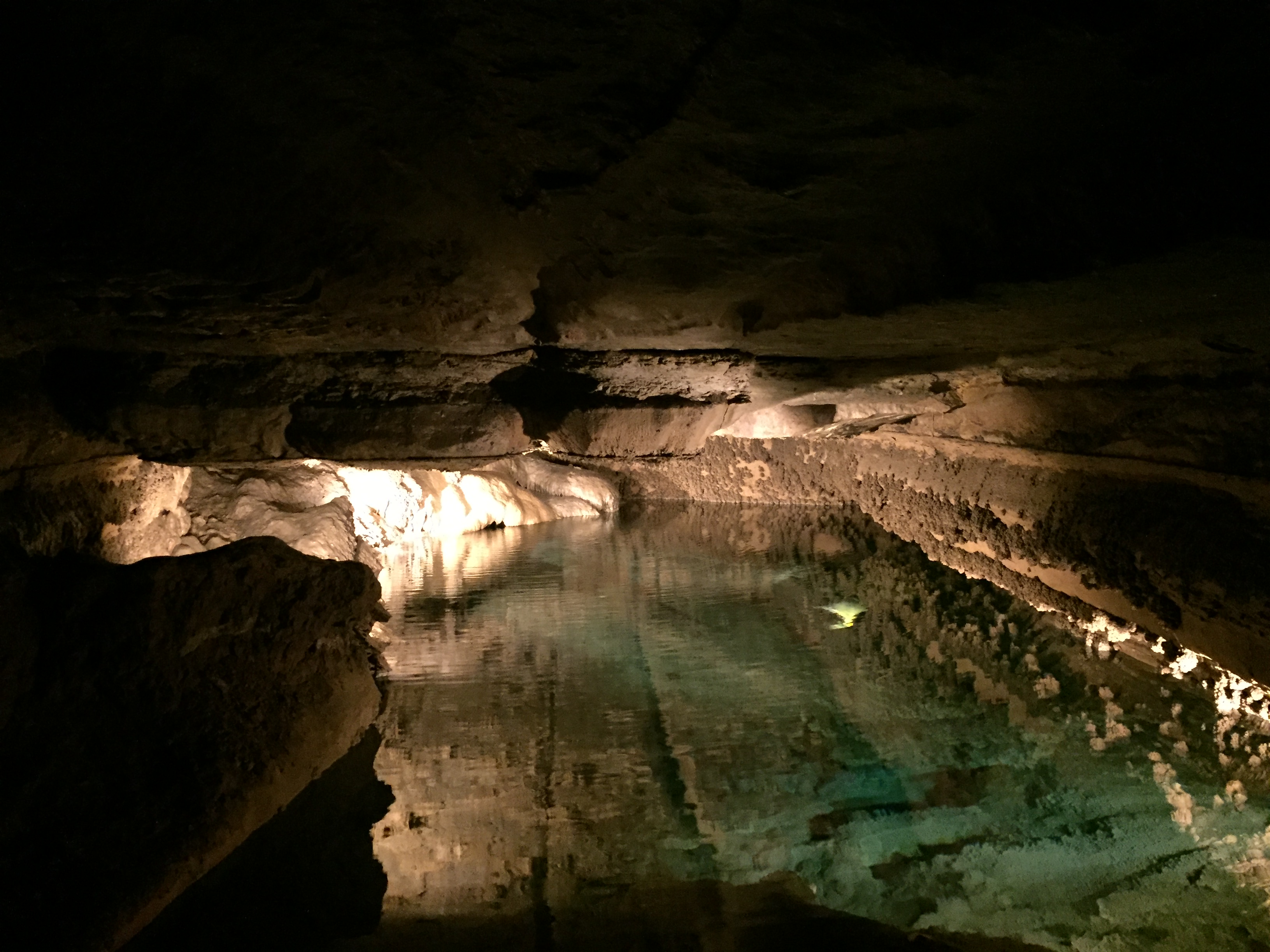 The water you see in this pool was about 10 ft deep, it was cool to see how it changed with different lights shining on it.   After about 45 minutes to an hour, we returned to the surface.   After being in the wet, damp 48 degree cave that long, we immediately noticed the pungent aroma of the forest and were greeted with a wave of hot summer air.

*Important:   Bring a jacket or sweatshirt on the tour.   I wore my new, cardinal attracting puffy and was perfectly comfy.   48 degrees might not sound cold, but the damp will get ya.

We washed our shoes after the tour to help prevent the spread of (WNS) White Nose Syndrome that is killing the bats in the area.   Sadly, they have seen a significant reduction in our flying friends this year, which means that the natural balance is disrupted and insects that damage crops and spread disease inevitably will increase.  Save the bats!

The Scouts did a second Lantern Tour later in the afternoon.  But between cave tours, we hiked the Hiking Club Trail as a group to help our younger scouts get their 5 mile hike in for their second class rank requirement.

The trail starts near the C Loop camp ground on the Maple Ridge Trail, goes past the visitor center to a scenic view of the river at the mid point,  we got turned around and ended up doing an extra mile or so, but enjoyed a thick shaded forest all along the way.   The trail showed signs of recent flooding and we found a little mud, but overall the hike was very easy.

The Scouts headed off on their second cave tour and I drove up to the Northern section of the park to check out the historic old town of Forestville.   I was a little short on time, so I didn’t have a chance to take the grand tour offered by the Minnesota Historical Society, but I would encourage you to check it out if you are there.

The Minnesota Historical Society has restored a portion of the town- site of Forestville. In the summer months, visitors discover Forestville’s past by stepping back in the summer of 1899. Costumed interpreters portray Forestville residents. Explore the “latest” styles of merchandise in the brick store or visit the Thomas and Mary Meighen residence. Pass the time with farm laborers as they go about their daily chores around the farm buildings.  More…

I hiked up the horse trail to the lookout to add a couple more miles to the day before the 2 1/2 hour drive home. 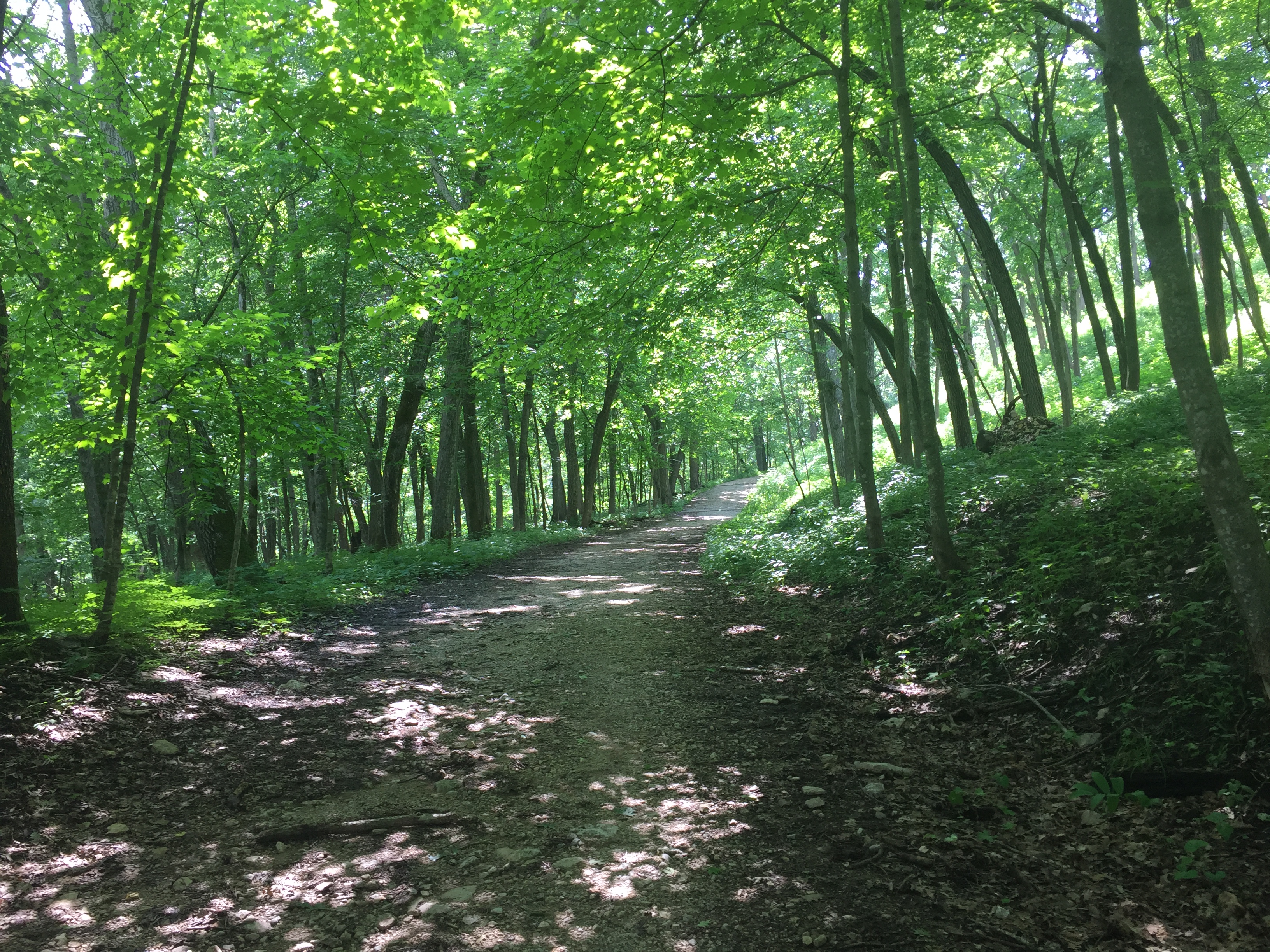 The temps were in the high 80’s and it was humid so I was thankful for the shaded trail, but it was definitely sticky.   Up the hill about a mile to the Lookout!

Made it to the Lookout!   Then back down the hill super quick!   It felt like 100 degrees with the humidity, I was still carrying a full pack and I was kind of ready to be done with this hike.

Overall, this park had so much to see, I would like to come back and spend a bit more time in it.   There are several varieties of cave tours, one being an exploration tour that the Scouts really wanted to check out next time for more of a ‘high adventure’ experience.

Have you been to Forestville or Mystery Cave?   Have you tried ‘caving’?  What did you think?   Tell me!

10 thoughts on “Part 2: The Mystery of …Forestville | Mystery Caves!”