No wind, no rain

Or winters cold can stop me,

‘Cause you are my goal.

There ain’t no mountain high enough

To keep me from getting to you…

Read Part 1 including our first stop to Palisade Head here

Eagle Mountain is the highest natural point in Minnesota. Although a State Highpoint and only having a modest elevation of 2301′, the mountain has multiple other interesting attributes for peakbaggers. Despite its short elevation, the peak has a surprising 1321′ of clean prominence as well as 437 miles of isolation from the nearest higher ground (found west of the peak, in the central region of North Dakota). In fact, the peak is the 9th-most isolated peak in the entire United States. Of the 82 USA county highpoints bordering the Great Lakes, Eagle Mountain is the highest peak. The mountain is also the highest point of Superior National Forest and Boundary Waters Canoe Area Wilderness. Despite being the highest point in Minnesota, the peak is located only 15 miles from the state’s lowest point (Lake Superior, 600′).  Summit Post

About 2-3″ of snow of fresh snow had fallen the night before, and the 21 mile drive up Caribou trail from Tofte was slow and downright gorgeous.  It was close to zero degrees when we got up so the air was crisp and the ice crystals gave us a beautiful sun halo.  Directions are pretty simple after Hwy 61.  Go approx 18 miles on the Caribou trail, turn right at the “T” onto “the Grade” and follow the signs to Eagle Mountain.

We saw a few bald eagles and winter-fattened deer the day before on HWY 61, and were delighted to see a HUGE owl not too far onto the Caribou trail!  I’m guessing it was a barred owl…it was the size of a dog!  All puffed up in it’s majesty, on a bitterly cold morning.  It was kind enough to let us pull over and take a photo without flying away.  I don’t know how long we stayed there, but owls can be super intimidating when they stare into your soul, so we didn’t hang around too long.

We reached the Eagle Mountain trailhead parking lot and saw the trail sign right away.  FYI, there is also a State Park style pit toilet for your convenience.  At the sign, you will find a spot to self issue a permit and check out the map and BWCA info.  There are also signs letting you know that you are entering a wilderness area, so be prepared and don’t create your own emergency!  The car thermometer said it was 1 degree, so we took a little extra time at the car to make sure we had the gear we needed, the right layers and hit the trail by 10am.  We also remembered it gets dark about 30 minutes sooner up North this time of year, so we wanted to make sure we had ample time to complete the trail.

Once our permit was in the box, we entered the thick forest.  We left our snowshoes behind since the snow was easily passible with boots.  It made for a quieter hike and we immediately stopped and noticed the sound of the frozen pines swaying and creaking audibly in the breeze.

We passed the only other person on the trail as he was coming down.  We asked him if he made it to the top, but later discovered through our advanced tracking skills that he had only made it to the false summit.  Poor fella.

Shortly after we passed the other hiker, we officially entered the BWCA!  My first time!  We ran into a beaver on the walkway you see behind me in the photo above.  He walked right by, then tried repeatedly to get into his frozen den hole about 10-12 ft away from us.  I kind of wanted to give him a little push, but he finally made it in

We hiked along the trail, climbing over a couple of downed trees, looking out onto frozen Whale Lake, navigating frozen wooden plank walkways, absolutely giddy about the winter wonderland we were enveloped in!

We found the first campsite about 1.5-2 miles in on the left.  We had originally planned on backpacking in on Friday night but I wasn’t sure about my gear and wanted to test it before heading this far out in the cold.  We did scout around and imagine what it would be like to come back in the Fall or hammock camp here. 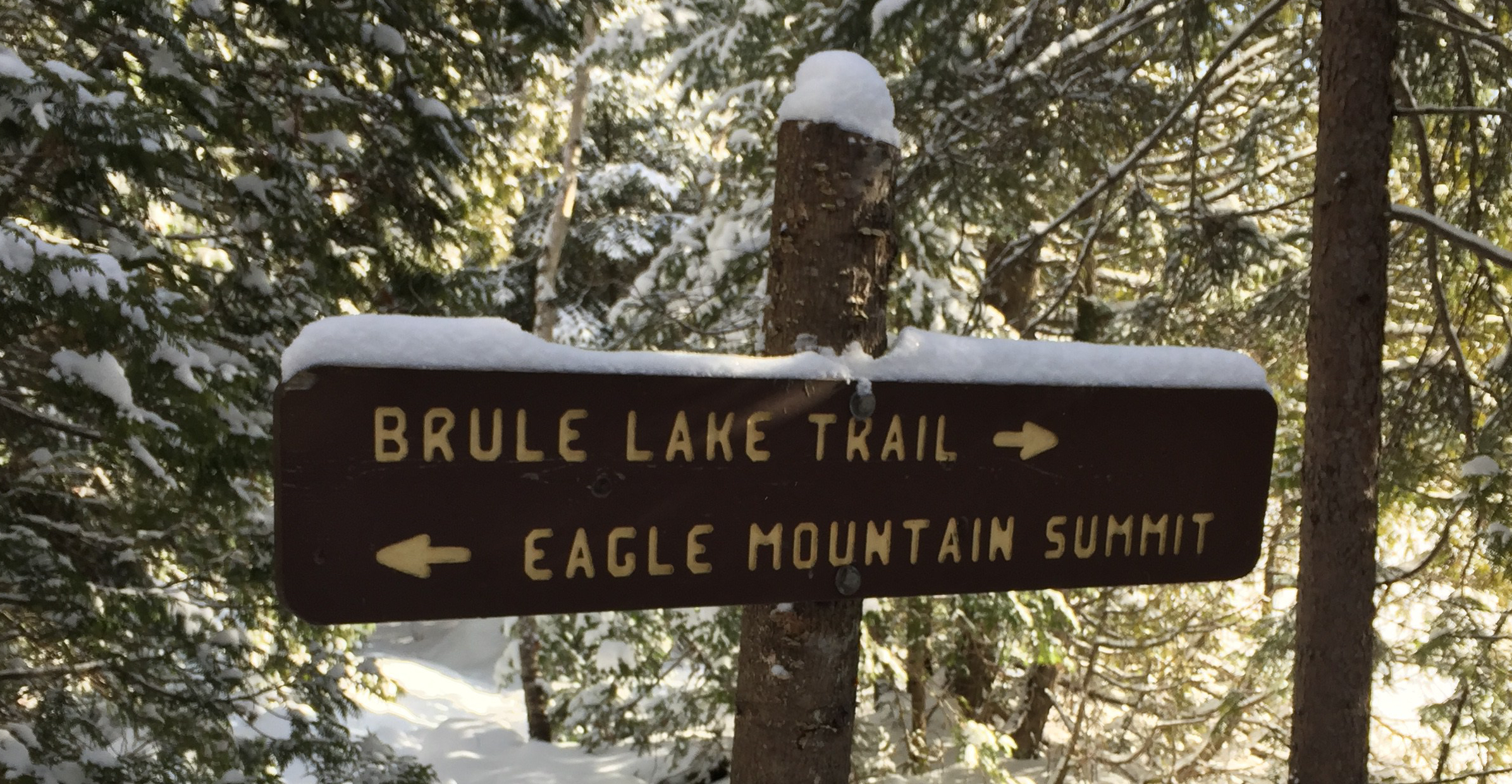 In the winter, the trailhead to Eagle Mountain can get confused with the Brule Lake trail if you aren’t careful.   The sign seems pretty straight forward but the trail to the summit actually leans a bit to the right and then up.

The last mile of the hike is where the elevation gains 550+ feet.  The trail reports all call out very rocky terrain and steep inclines, but I think the snow kind of helped smooth the route out a bit.  We just had to watch out for icy spots.  I did bring some Ice Trekkers  that I wore on the way down.  Hiking poles were also nice to have for stability.  Regardless of the time of year you go, wear sturdy shoes and prepare for uneven terrain.

We were surprised at how many little streams and running water there was on the mountain.  I accidentally stepped in one and almost got a wet foot, so watch your step and I suggest waterproof boots and extra socks if you are heading up in cold weather. 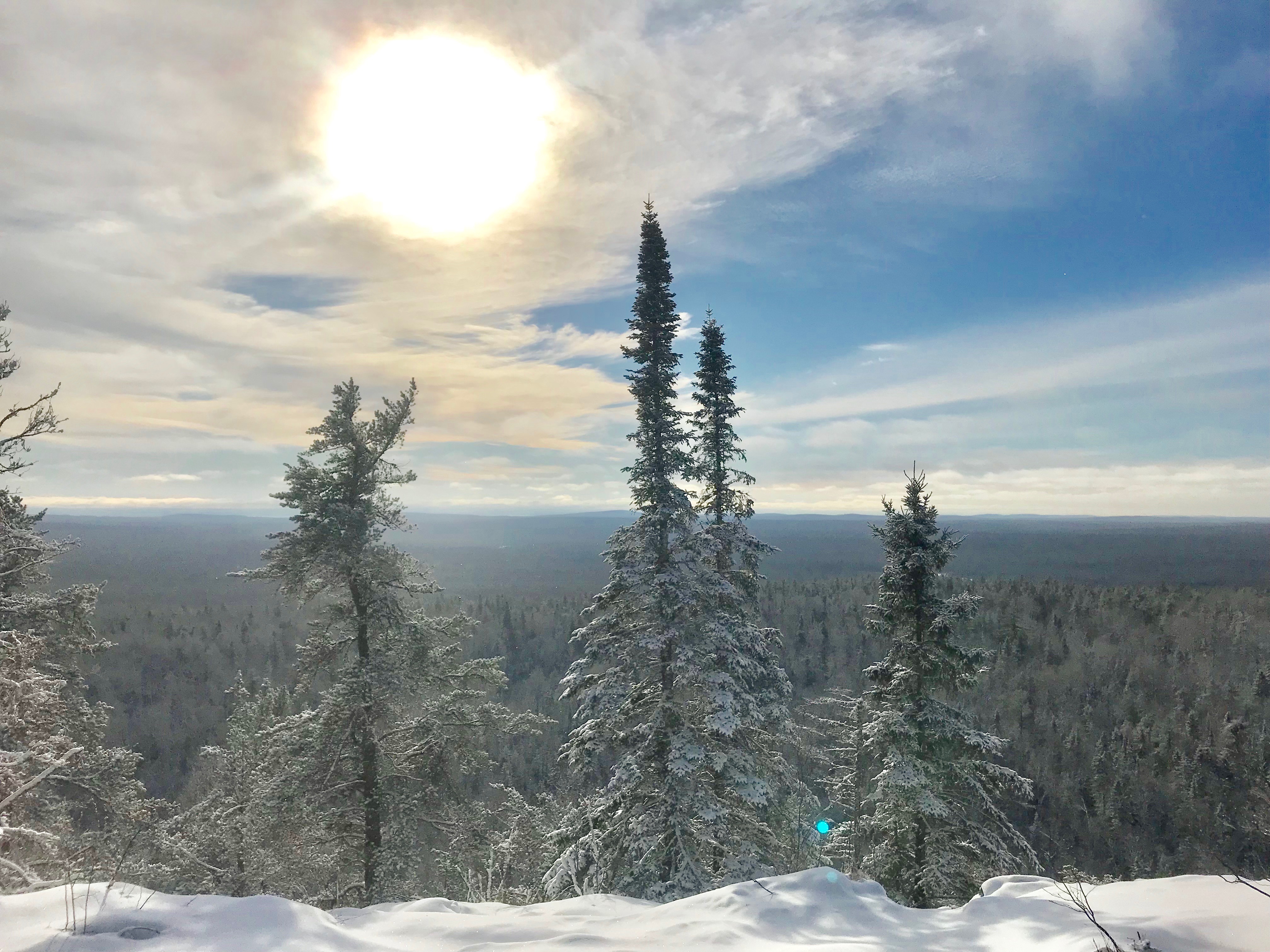 We read about the false summit on a trip report….and that’s where hiker #1’s footprints turned around.  It was absolutely beautiful!  I got a cell phone signal (don’t rely on it) and made a quick Facebook live video to share the moment with some friends and family back home.

My frosty transformation into Dan Cooke.

The sun was shining, but as soon as we stopped, we started getting cold.  So we kept moving.  Pam’s thermometer said it was about 10 degrees but when the wind blew even just a little, it bit right through us.

We reached the summit and dug around for a while in the snow looking for the sign and the geological marker.  We never did find it. 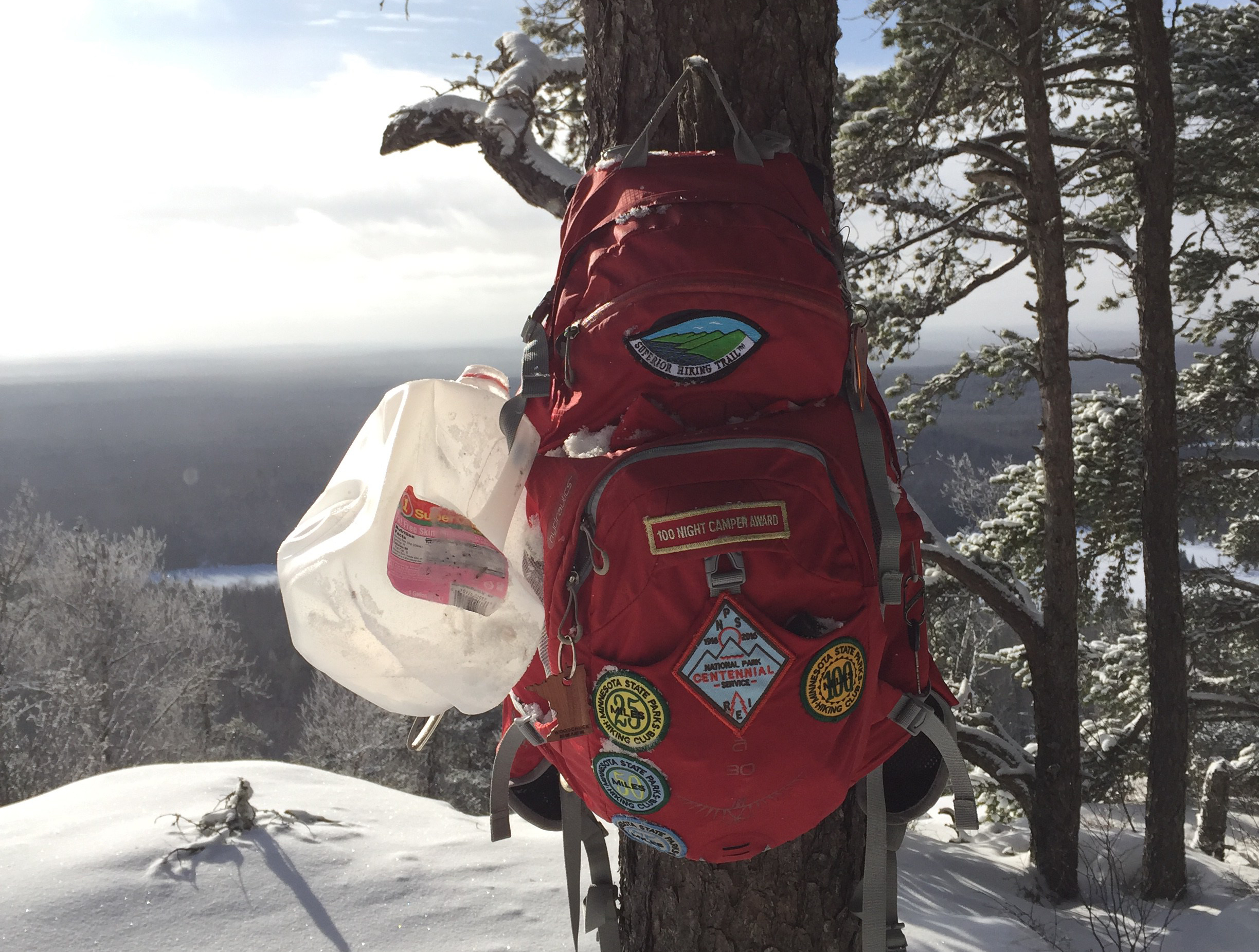 We DID find a fresh pile of trash, including an empty jug of skim milk, food trash, a burnt aluminum oven pan and campfire remains.   People!  Leave no trace!

I took my phone out of my pocket, which was nestled between 2 chemical hand warmers (Pam’s pro tip!) to keep the battery alive and made a video from the summit.  It took less than 4 minutes of exposure for my phone to freeze up and die.  My hands felt like they were going to freeze up and die too.  It came back to 10% battery once I put it back on the warmer, but it was cold and we were ready to head back down. 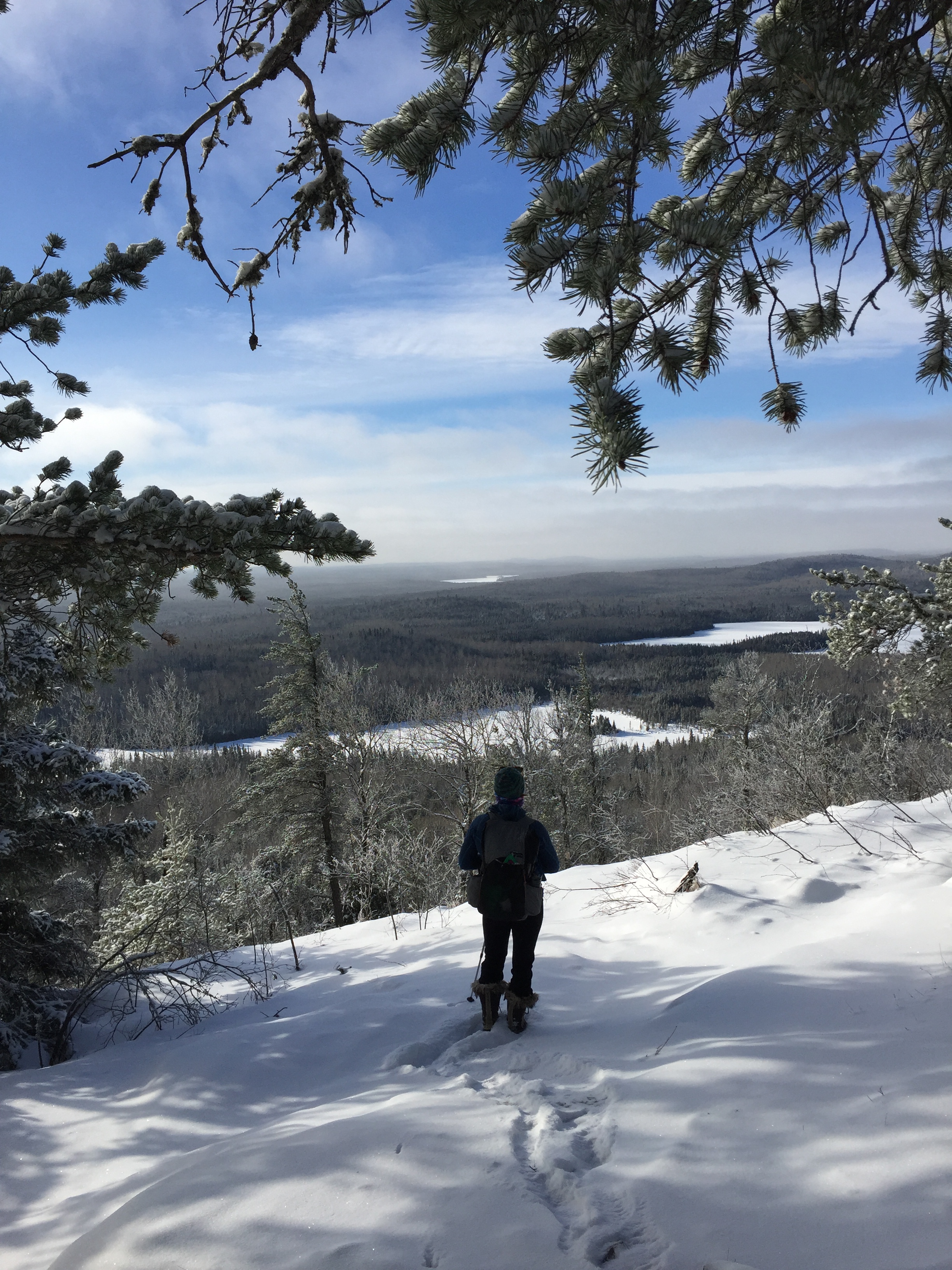 We had one more peek at the overlook before we left and I counted 8 lakes.  Everything seemed prettier up there.   Even though it was not the highest peak I’ve climbed this year, including our Glacier National Park adventure…it was really a personal highpoint as the finale of a whole year of hiking.

We scooted down the mountain quickly and decided to check out the 5 star campsite on the North side of Whale Lake on our way out.

We turned left onto the Brule Lake trail and the campsite was 1/4-1/2 mile beyond the sign.  It was absolutely gorgeous and though I was still glad we stayed inside the night before, I kept thinking this would be a great short trek for older Scouts in our Boy Scout troop. 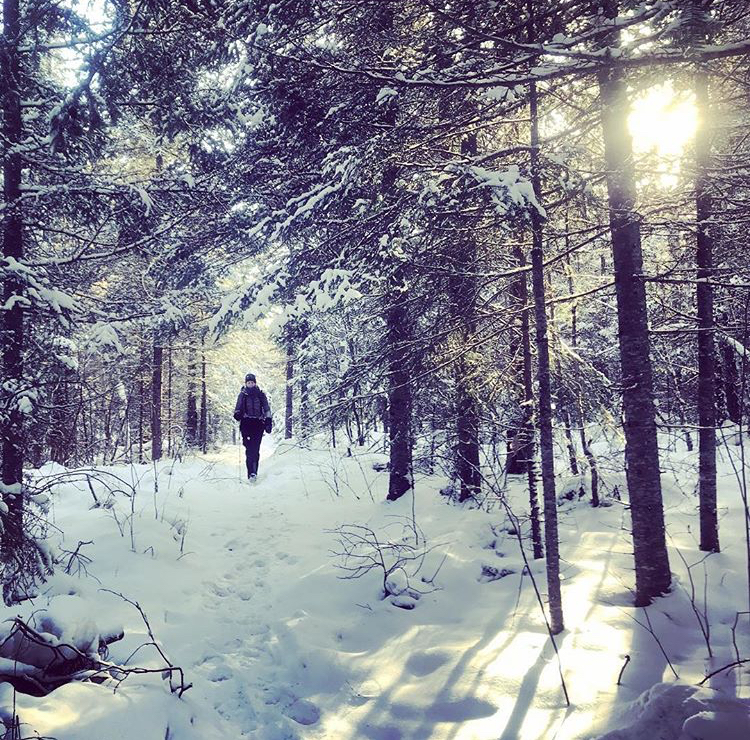 We finished the hike through the forest and enjoyed the changing light as the sun began to lower around 2pm.

We scrapped the idea of making lunch on the mountain and enjoyed a late lunch in the comfort of the parking lot.  I had never used my SnowPeak gigapower stove in the cold, but at 9 degrees….that baby was chugging along like the little engine that could!

In the end, my 52nd hike was everything I had hoped it would be and I am filled with gratitude for the adventures and new friends this year has brought.  Thanks again to my hiking buddy for making it a great trip and taking all of the good pictures in this post!