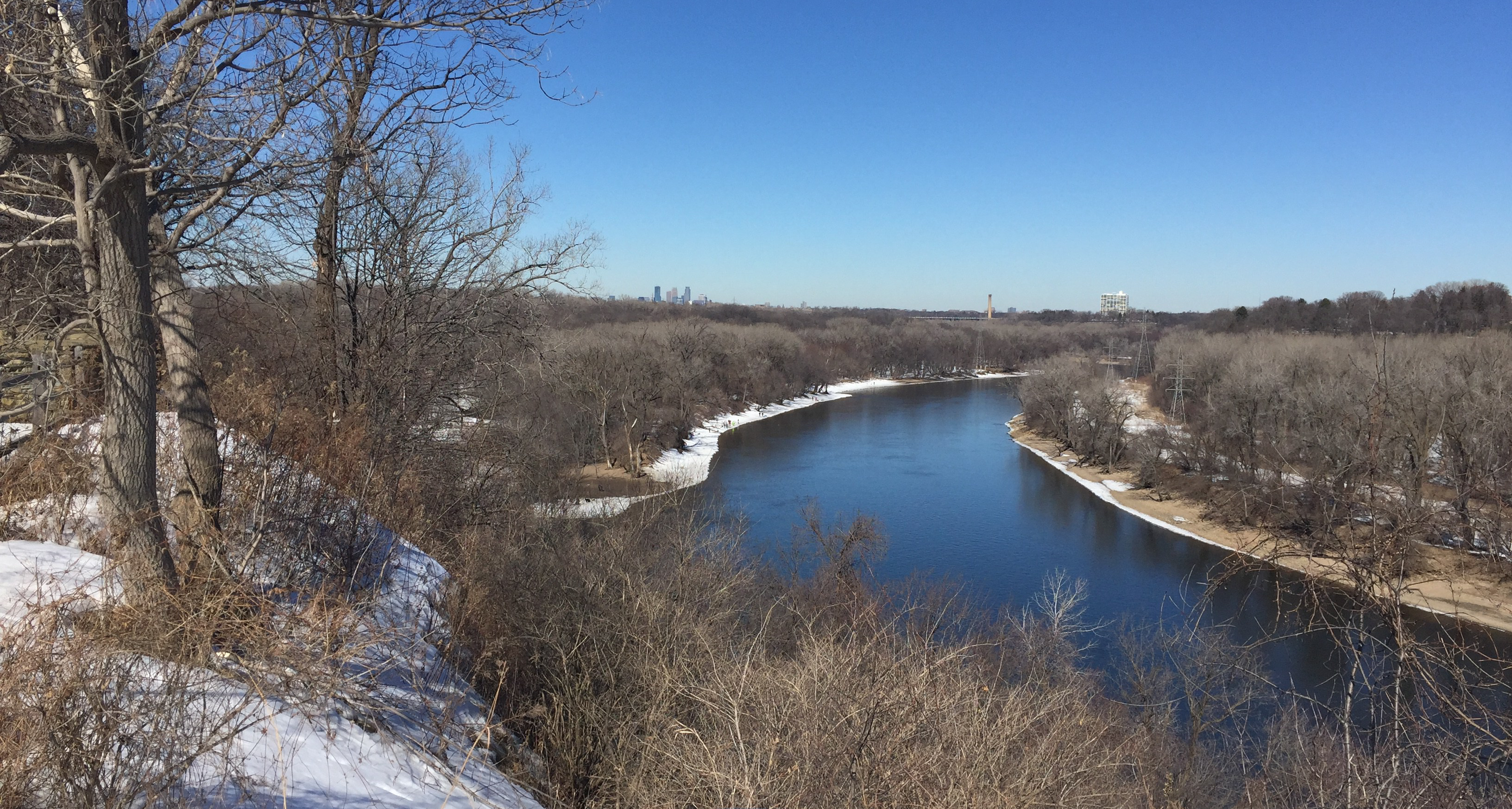 My 16th hike of the 2018 52 Hike Challenge started at Fort Snelling State Park.   It is a park that I have been to many times during all 4 seasons and can easily be modified for various distances.   It’s a great park for family picnics, youth programs, wildlife and is both a State and National Park since it is on the Mississppi.  Each time I’ve been there, I am greeted at the long drive downhill by a gang of Turkeys.   They were there again yesterday, the official welcoming crew.

I started my hike started at the visitor center about a mile or two into the park, at the parking lot just under the Mendota bridge.   The Minnesota chapter of Women Who Hike had a group outing scheduled on Pike Island as one last snowshoe hurrah for the year.

I got there an hour early and headed up the trail towards Fort Snelling and Minnehaha Falls.   It was about 35 degrees and I told myself that I would hike as far as I could for 30 minutes, then turn around and meet the group, taking whatever miles I got.

Rule number one in preventing blisters is to listen to your feet and stop and fix hot spots before they become blisters. 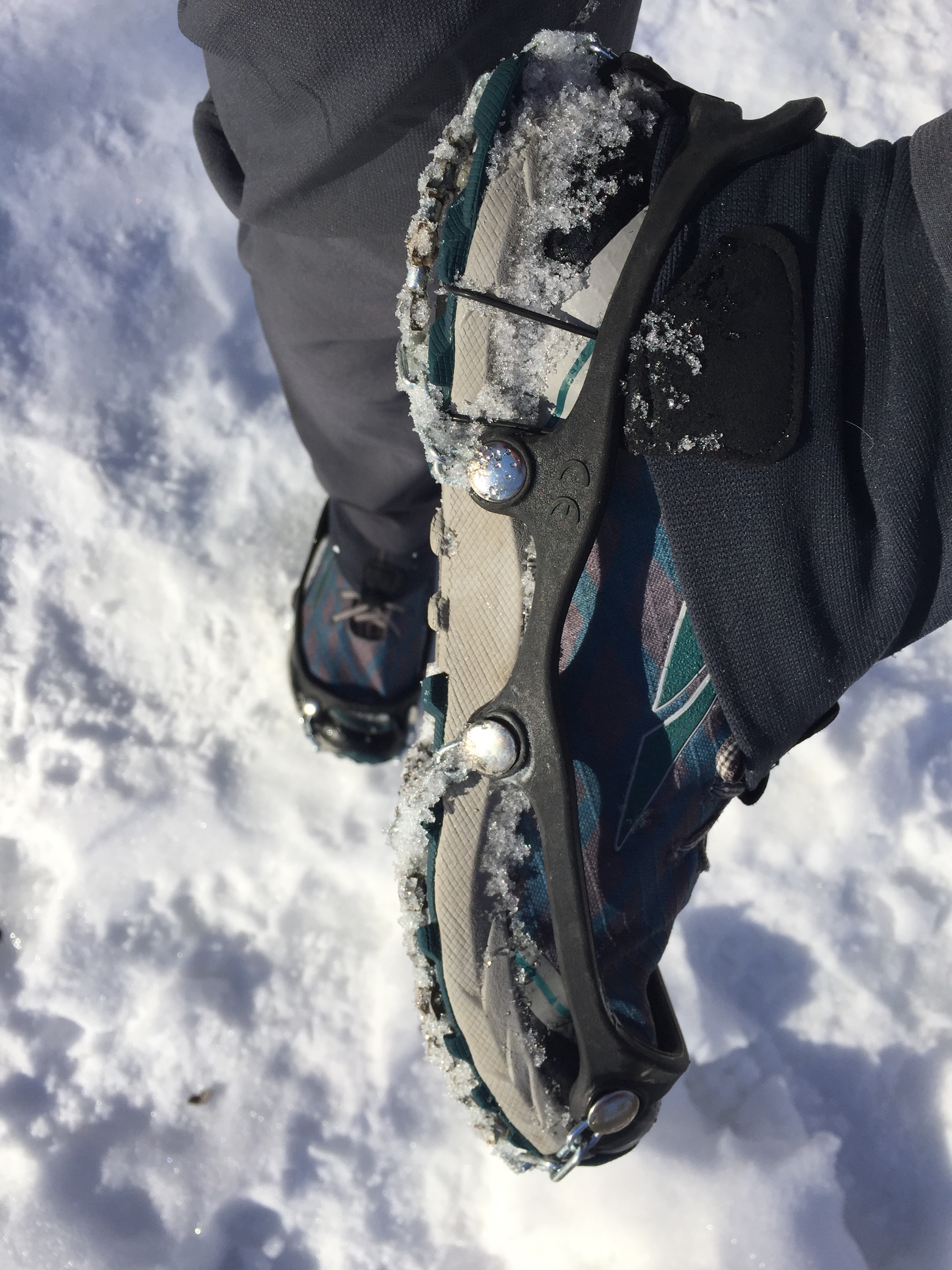 I wore this combo of Altra Superior (flexible trail runner) with a Inov8 wool gaiter and Yak Trax ICEtrekker Diamond Grip Traction on the first 3 miles of my 10 miler yesterday. The rubber frame of the Yak Trax rode high on my low profile trail runners and squeezed my heel, causing a friction hot spot, which is now a matching pair of nickel sized heel blisters. Grr! I haven’t had a heel blister since our FIRST trip to Glacier National Park! Sharing as a reminder to to take care of your feet, STOP and be aware especially if you are trying new shoes, socks, etc.

Patched up my feet and met 10 other women to hike the Pike Island Trail.  We didn’t need snowshoes, but a few people wore traction (I ditched mine due to said preventable blisters).

We started the 4 mile Pike Island trail loop counter clockwise, with was cool since I ALWAYS go clockwise!   Even and old familiar trail can bring fresh experiences if you switch up the direction. 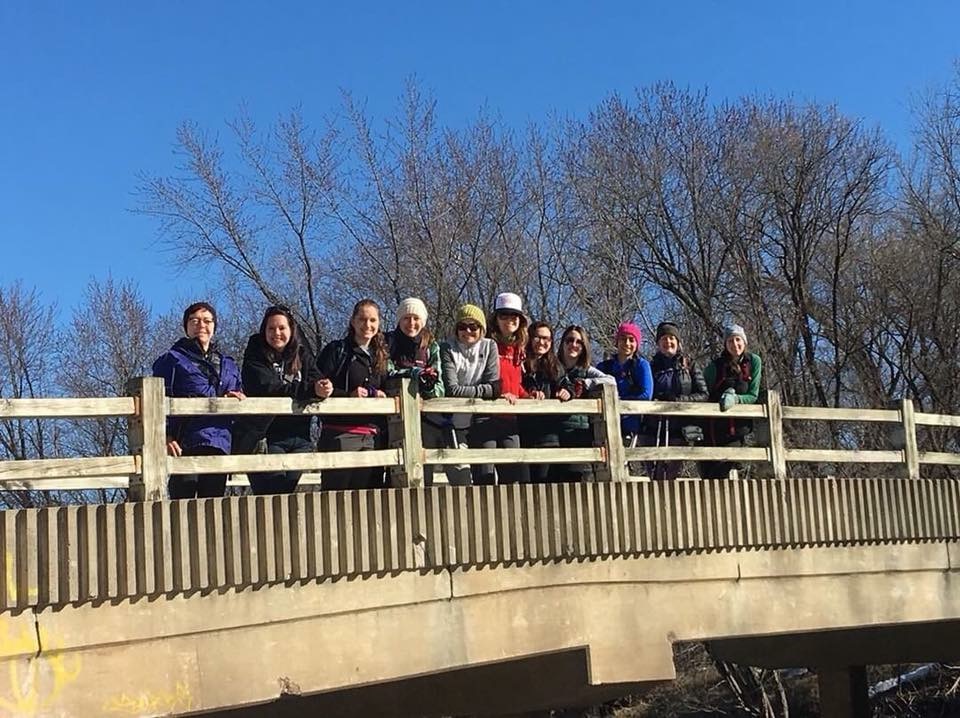 We started by crossing the pedestrian bridge to the island and stopped for a group photo. The main trail circles the perimeter of the island, starting with views of the semi frozen Minnesota River, under the Mendota Bridge.

From there we continued through packed snow and a little ice and saw three deer grazing by the shore.  The deer are fairly tame on the island, but remember to give them their space.   We had a little fawn walk up to us in the Spring once, and we had to shoo it away for it’s own safety.

The half way point is my favorite spot on the island, what some folks call Baptism Beach.   Its the very point of the Island and marks the confluence of the Minnesota and Mississippi Rivers.   If you look at the satellite version of the google map, the joining of the rivers is visible.  Its amazing to me that you can see their waters separate until the Mississippi swallows them up.   I just noticed that the Dakota name Bdote has been added to the Google Map, there was no sign or information on the island about the name change that I could see when we were there, but here’s some information I was able to find as I write this.

“Bdote” is a Dakota word meaning “where two waters come together.” The term also can describe a larger area, such as the geographical area where the Minnesota and Mississippi Rivers meet. This area in Minnesota is central to Dakota spirituality and history. (more)

I’ll be the first to admit that I did not grow up in Minnesota, so I always feel like I’m catching up and learning about it’s history.   Fort Snelling is a place every Minnesotan should visit to learn about the rich history and the horrible genocide committed against the Dakota people during the US Dakota war of 1862.   Some of the sacred places in Minnesota are being renamed to both reclaim these spaces and acknowledge our dark history.  Again, forgive me if I’m not giving a very good history lesson, It is something that I want to know more about.

When we were at the Bdote, something very odd happened.   At least a dozen fishermen pulled up in close proximity to each other on the Mississippi side in their fancy boats and were fishing!   It was the oddest thing, since it’s March!   St Patricks day fishing derby?   We got a good chuckle out of a large group of women on land, watching the large group of men on water and vice versa.

We finished the loop on Pike Island, said our goodbyes, and a couple of people joined the Minnesota State Park Hiking Club at the visitor center since they had found their first password on the hike.

From there, I took the same route I started on in the morning but hung a left and headed up the big hill to the Fort, taking in views of the historic structure and the river valley below.

The Fort is closed during the winter months, so I walked around it a bit, trying to imagine it during the 1800’s.

Wandered next to the Chapel, where they still hold services and where Elizabeth Snelling is laid to rest.

At this point, my 4 mile hike had turned to 8, and the temperature was nearly 50 degrees and sunny.   I had no where else to be and remembered that there was a tunnel that goes under the Highway to the Northern Star Scouting Basecamp.  This building was part of the Historic Fort and renovated into a space where all youth can grow and learn.  You don’t have to be a Boy Scout to enjoy the space, there was a birthday party going on when I popped my head in!

Northern Star Council is also building a brand new Leadership Center, so I thought I would check that out too.  The construction was all fenced off, but it is due to be complete this summer with a grand opening in the fall!

Made my way back to the start at 9.75 miles….so close!  Determined to make it 10, I discovered a trail under the Mendota bridge, explored  a little and headed back.  I had never been on that section of the trail, so that definitely left something for next time!

Have you been to Fort Snelling State Park?   Tell me your favorite things about it here , it was one of my very first Wandering Pine Posts!