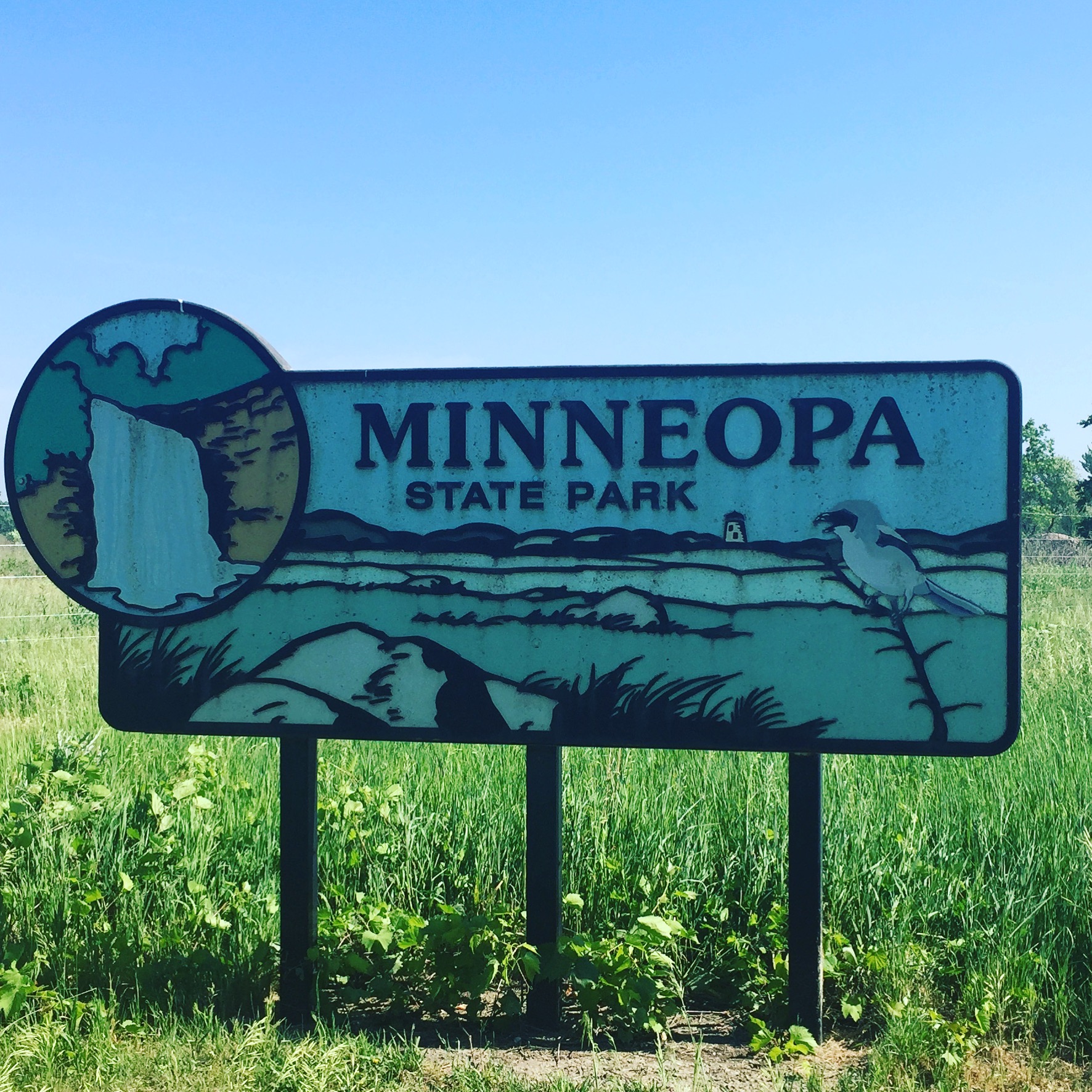 Today’s post is a DOUBLE FEATURE and marks hike #25 of my 52 hike challenge, almost half-way there!  I wasn’t able to join the scouts camping this weekend, so I met them down at camp for a nice day hike.  I needed the Minnesota Hiking Club Password for Minneopa State Park and it’s one of the last parks on our list that are still fairly close to the Metro area.  The drive is a straight shot south on 169 and 5 miles outside of Mankato.

We arrived at camp, heard all about the Scout’s adventure thus far and headed out before the sun got too hot.  It was a scorcher this weekend, with temps close to 100 degrees.  The Hiking Club Trail was partially closed and re-routed but well marked.  It took us through some woods and a little bit of the prairie, but it wasn’t the most scenic hike I’ve ever been on…the view to the river was obscured and we were all pretty hot.   I was glad to have the Scouts to entertain us and just enjoyed spending time outside with them.  We went about 4 miles and decided to keep it short due to some of them overheating.  Along with us all reminding each other to drink plenty of water, I fed the wilty ones a pickle and ate a couple myself!  Ultimate Hike trick.  Thanks Coach Holly!

After lunch, we decided to cool off in the car AC and take the Bison drive through the Prairie.  This park has a lot of history and has started a conservation effort of the American Bison. 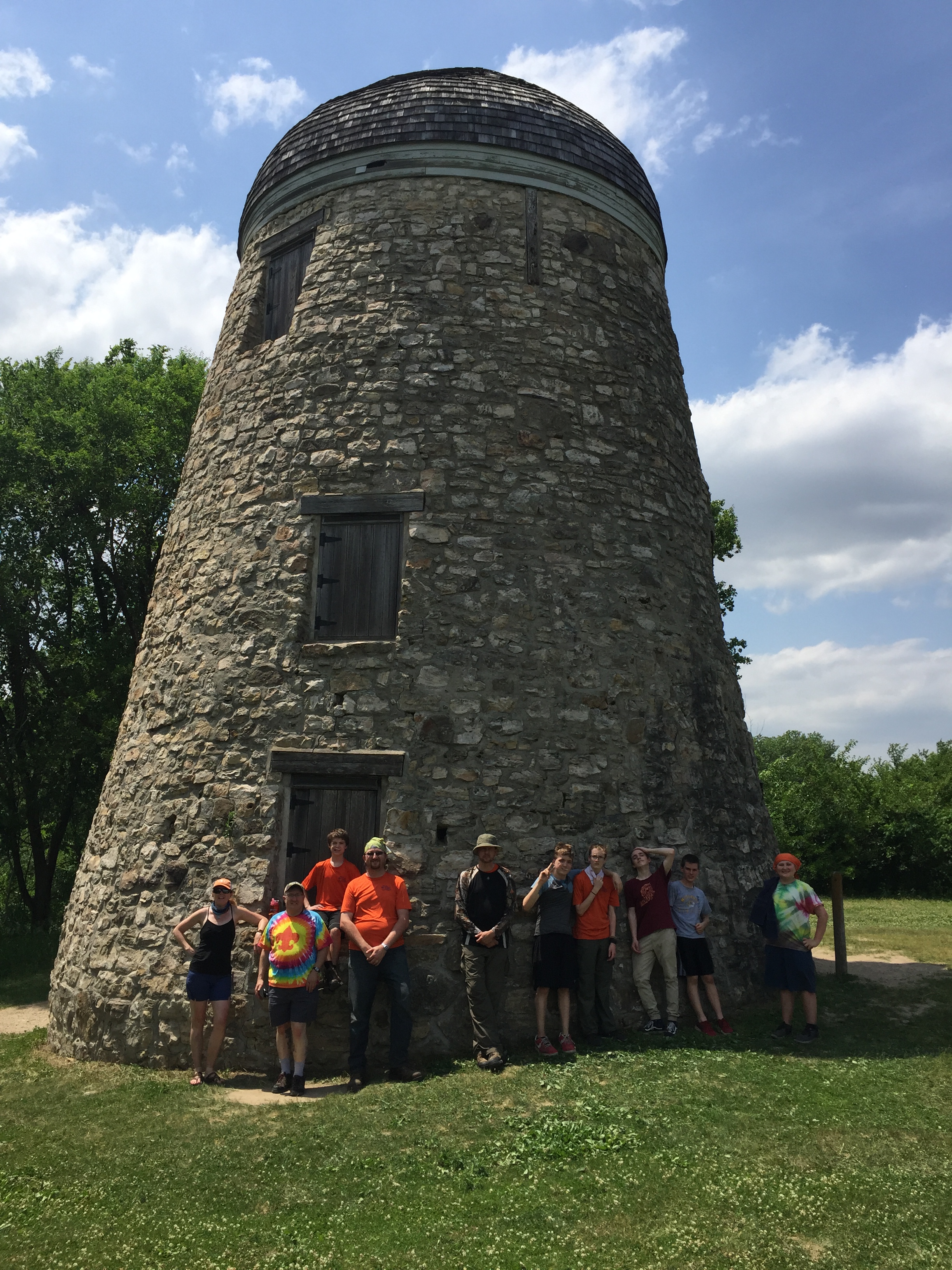 I have to be honest though, it was so blasting hot that I didn’t really stop to linger, read signs or learn much while I was there.  I did take pictures to check out later when I wasn’t in a half melted state at the Seppman Mill. 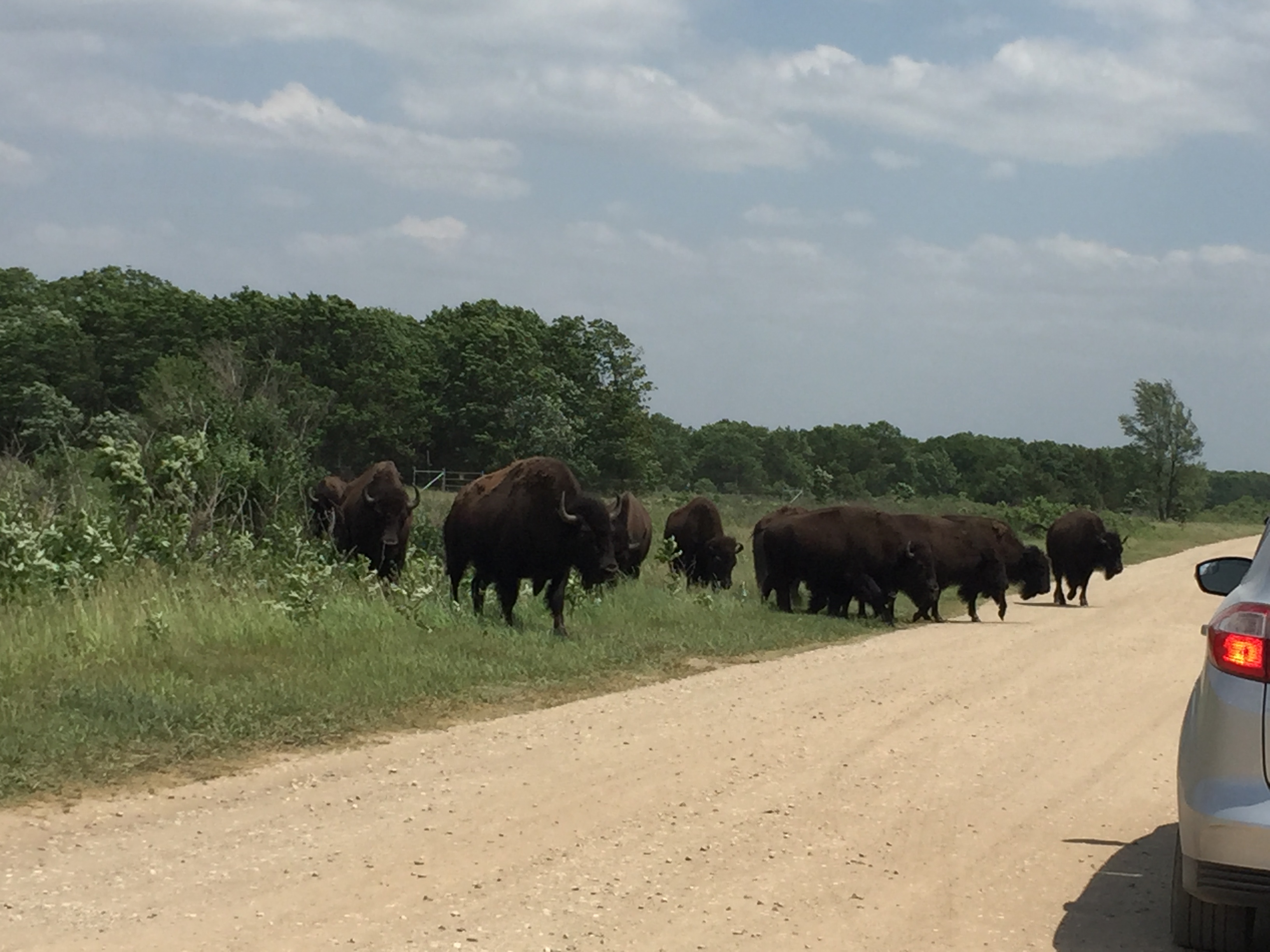 We didn’t see any Bison on the drive to the Mill, but we had what I believe was the WHOLE HERD lumber across the road in front of our car on the way out.  It’s crazy how big these beautiful beasts are!  I seriously thought they were going to walk right over us, but we stayed in the car and watched them happily trot off into the prairie with wagging tails.  It reminded me of a similar experience we had in Yellowstone a few years ago and definitely was the best part of the park!

Next we headed up the road to the second section of Minneopa State Park.  It’s a little weird that you have to drive a couple of miles to it, but it was nice to cool off a little in the car.  We went straight down to the Falls to cool off. 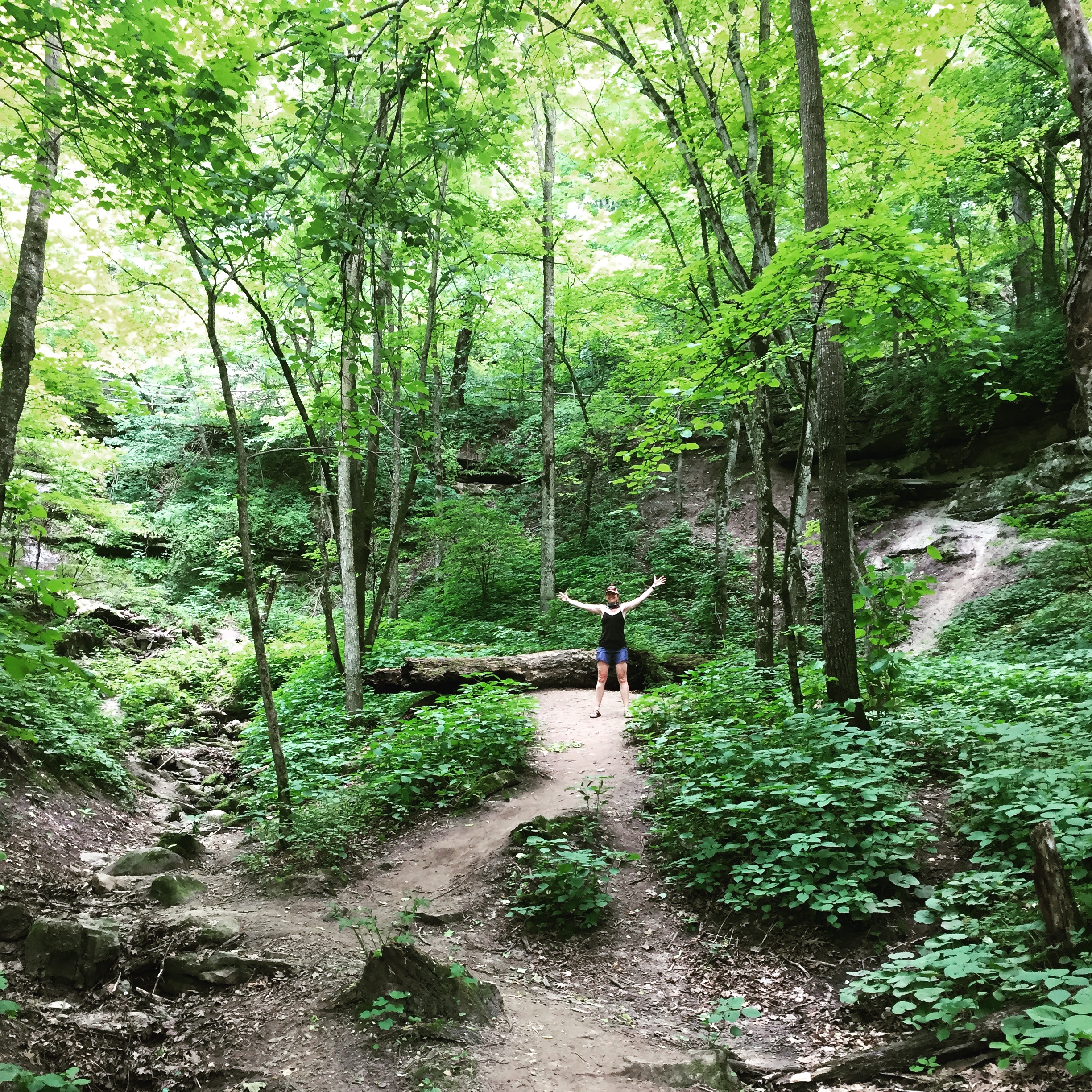 I read the warning sign about bacteria in the water AFTER I swam in it…  We all ended up being fine, but take warning before you go. 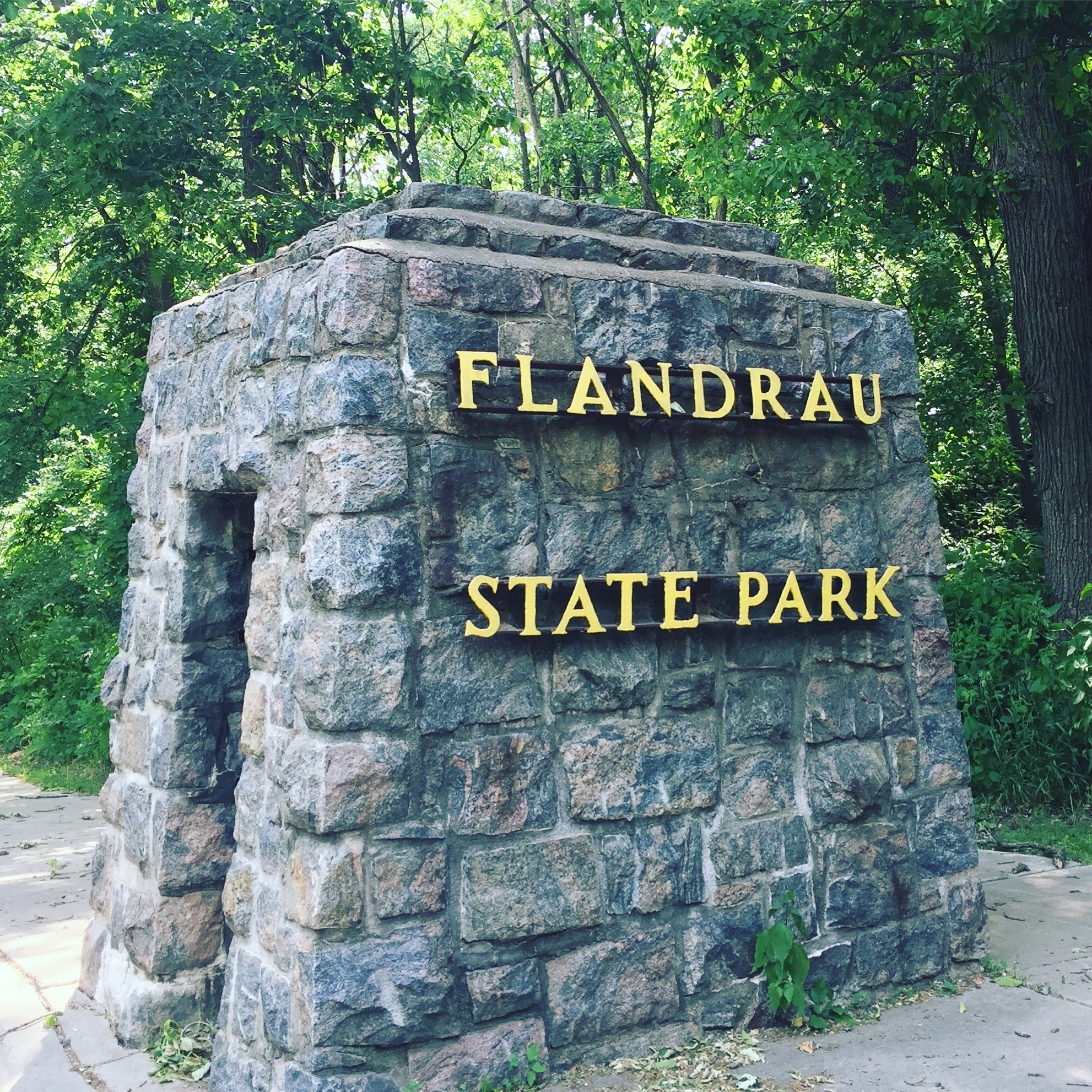 The Scouts headed back to camp and we decided to hit another trail since it was only 20-30 minutes away and a short 2.7mi trail.  DOUBLE FEATURE!!!   The route to Flandrau State Park is a lovely farmland drive and most importantly it has ANOTHER HIKING CLUB PASSWORD!

So, off we went…in 98 degrees, to grab another trail. 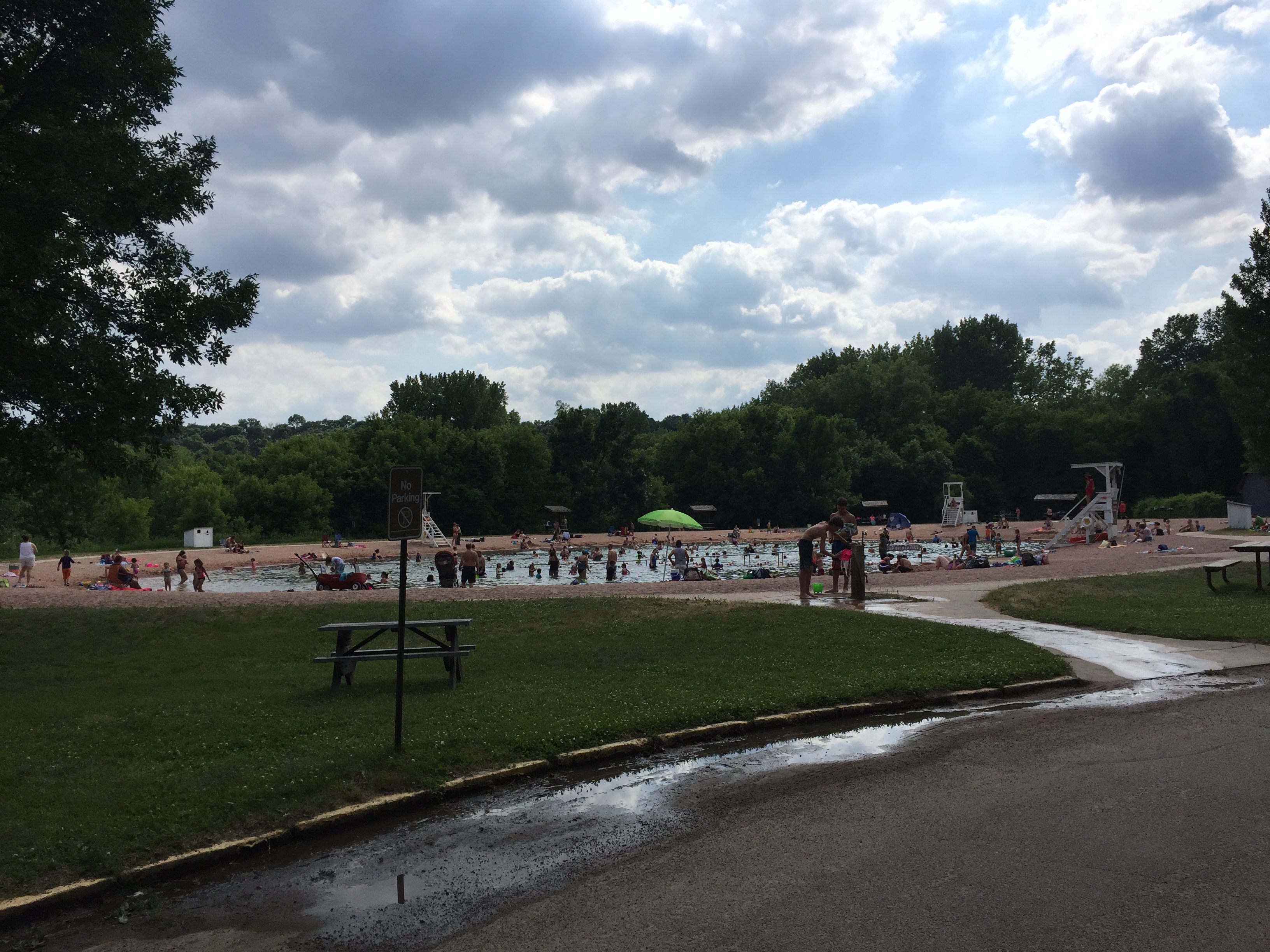 Like Father Hennepin and Sakatah, Flandrau  felt more like a City Park.  It was very accessible, had a FULL campground of happy families camping in tents and RVs and a sand bottomed pool that was hoppin’.  Lots of people barbecuing and the only State Park I have ever been to that had a concession stand. 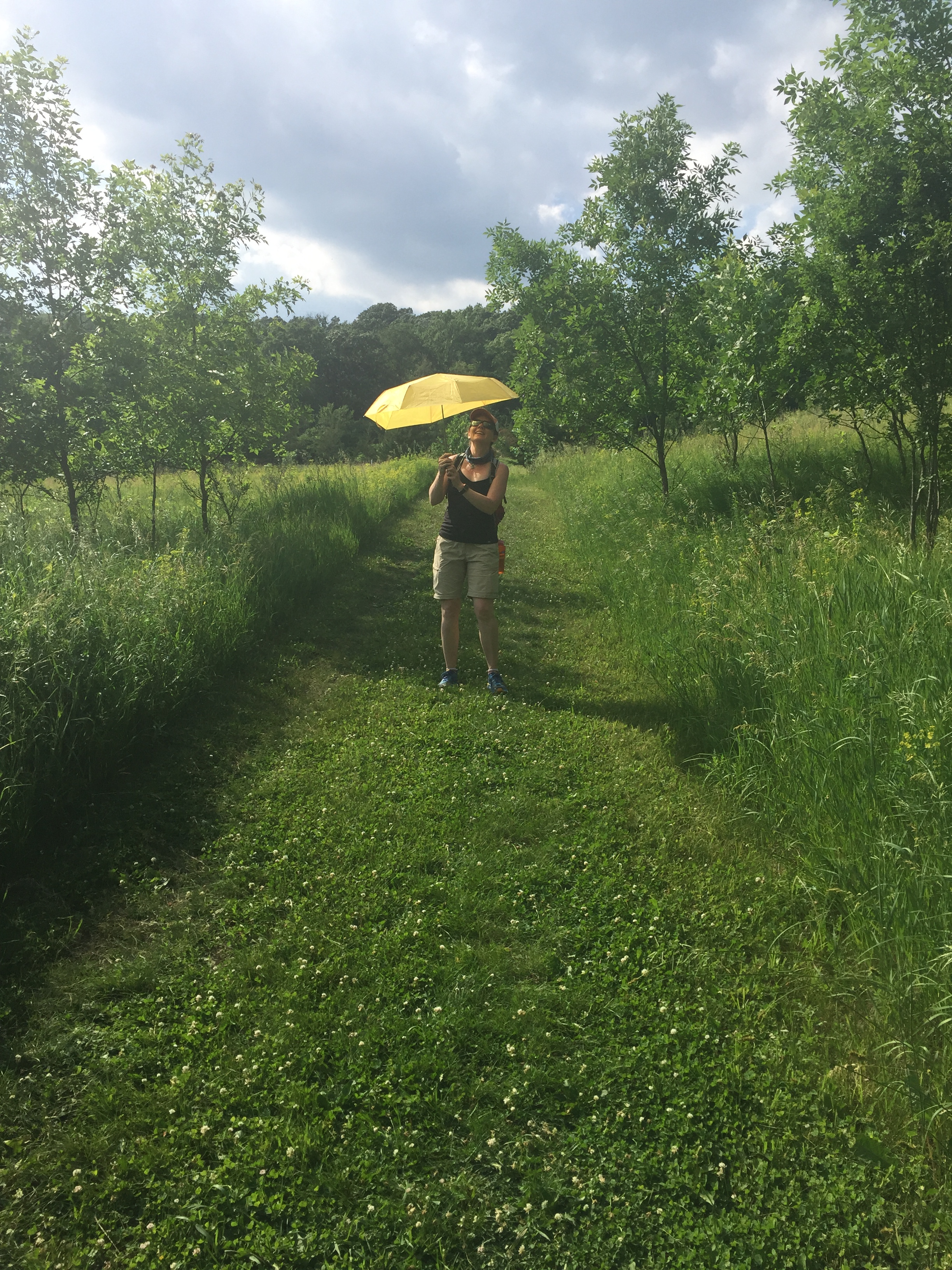 The wooded trails were buggy but offered a couple of nice overlooks of the Minnesota River.  We exited the thick woods and found ourselves the wide open, blazing hot prairie!  It felt much hotter in the exposed sun and I had to break out my umbrella to survive.

This was the point in the hike where we wondered if the “two parks in one day” idea was such a good one.

We cut through the campground to get back to the car a little quicker and headed straight for the concession stand for cold gatorades and ice cream sandwiches.  Warning:  the concession stand DOES NOT TAKE debit cards.  But they take checks (?) We had no money… so we pouted all the way back to the car and drank our warm water.   The car thermometer said 100 degrees in the shade….so we headed over to Patricks on 3rd in St Peter for some cold beverages and ENORMOUS BURGERS!  Highly recommend it, great post-hike-in-the-inferno food.

Another note about the heat:  I drank 3L of water, 1L of Gatorade, ate 3 pickles, swam in a waterfall and skipped around like Mary Poppins with my umbrella to beat the heat.  It really wasn’t too bad, but we had to stay ahead of it.  Dehydration can sneak up on ya fast, be prepared! 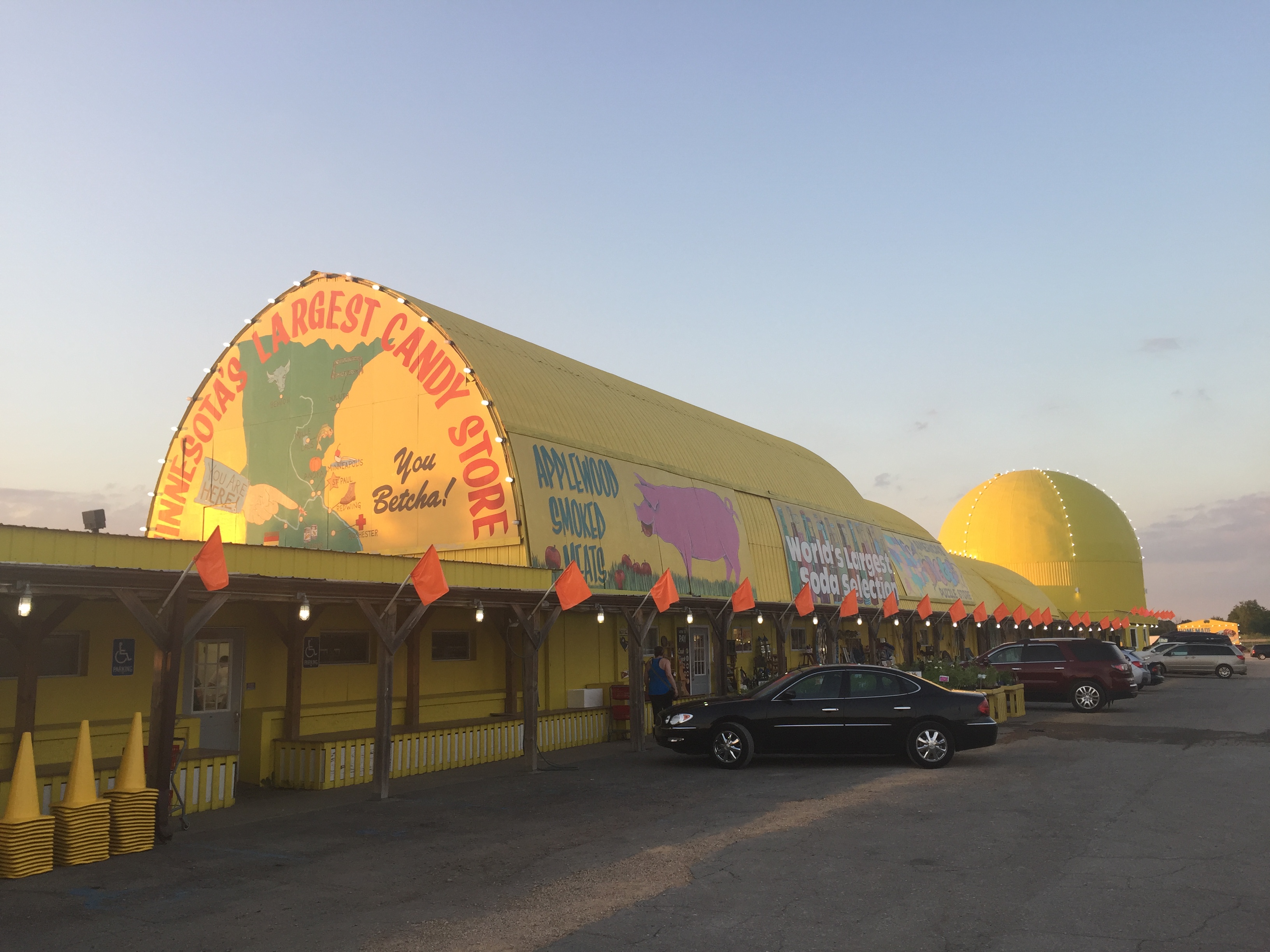 One the way home, we stopped at the MINNESOTA’S LARGEST CANDY STORE to check out their new dome addition.

This could be a blog post of its own, and can be described as having a kitschy Wall-Drug-esque outside with a sweet and slightly overwhelming inside.

Don’t plan on taking your kids there unless you want to hang out there for a long time,  buy a ton of candy and still say no a lot.  This is a place for Grandparents to spoil their grandchildren and for the rest of us to long for the worlds largest salted nut roll (not for sale) 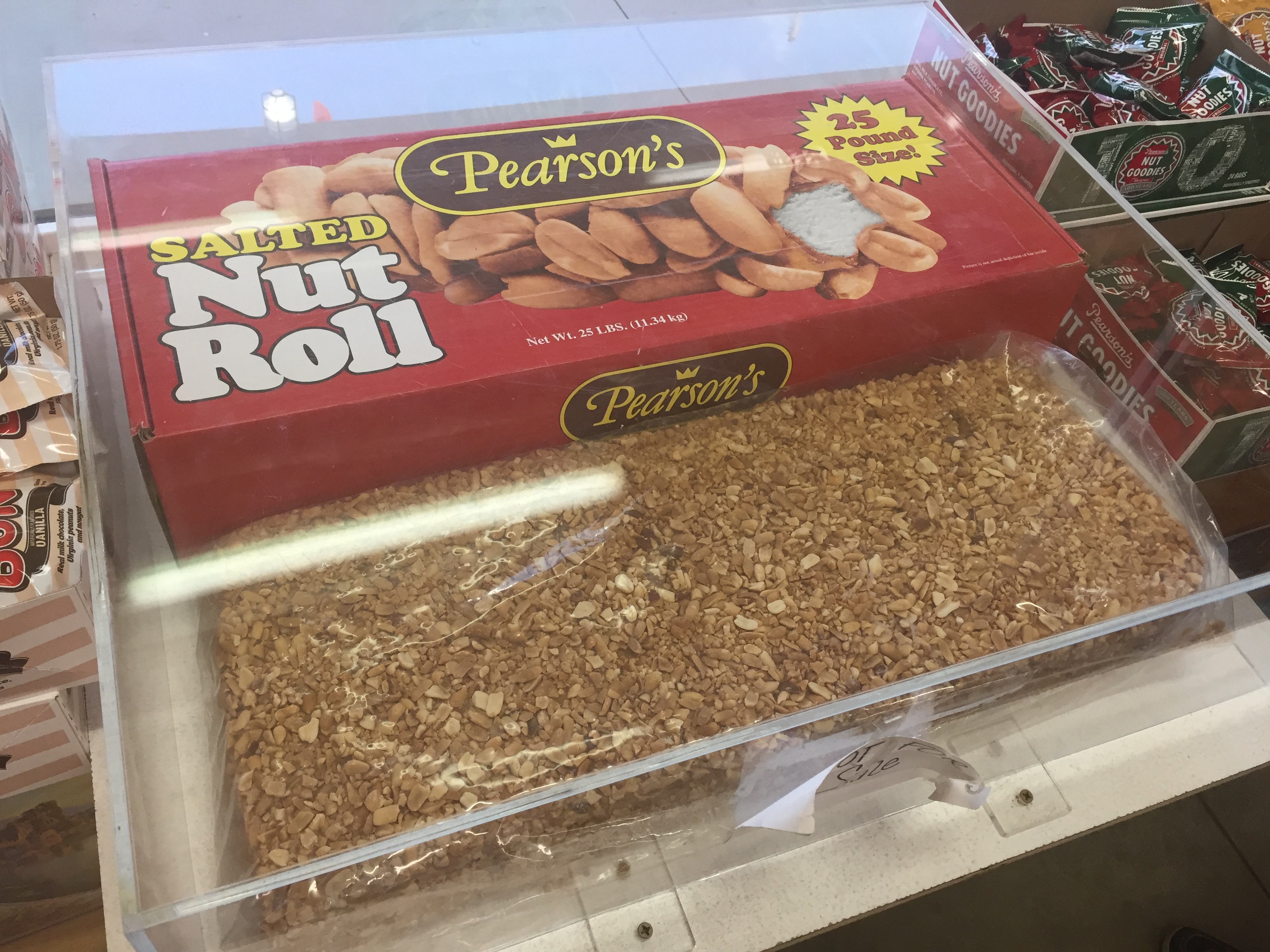 Overall, these two parks weren’t the most grand I had ever been to, but like I said earlier, they had a welcoming city park feel like Minnehaha Falls or French Park and were still a treat to visit.  If you are collecting Hiking Club Passwords, these are a nice pair to do together, like Father Hennepin and Mille Lacs Kathio.  I probably won’t come back to these parks to camp, but if I were passing through or wanted a family picnic spot, these are a nice spot to stop. 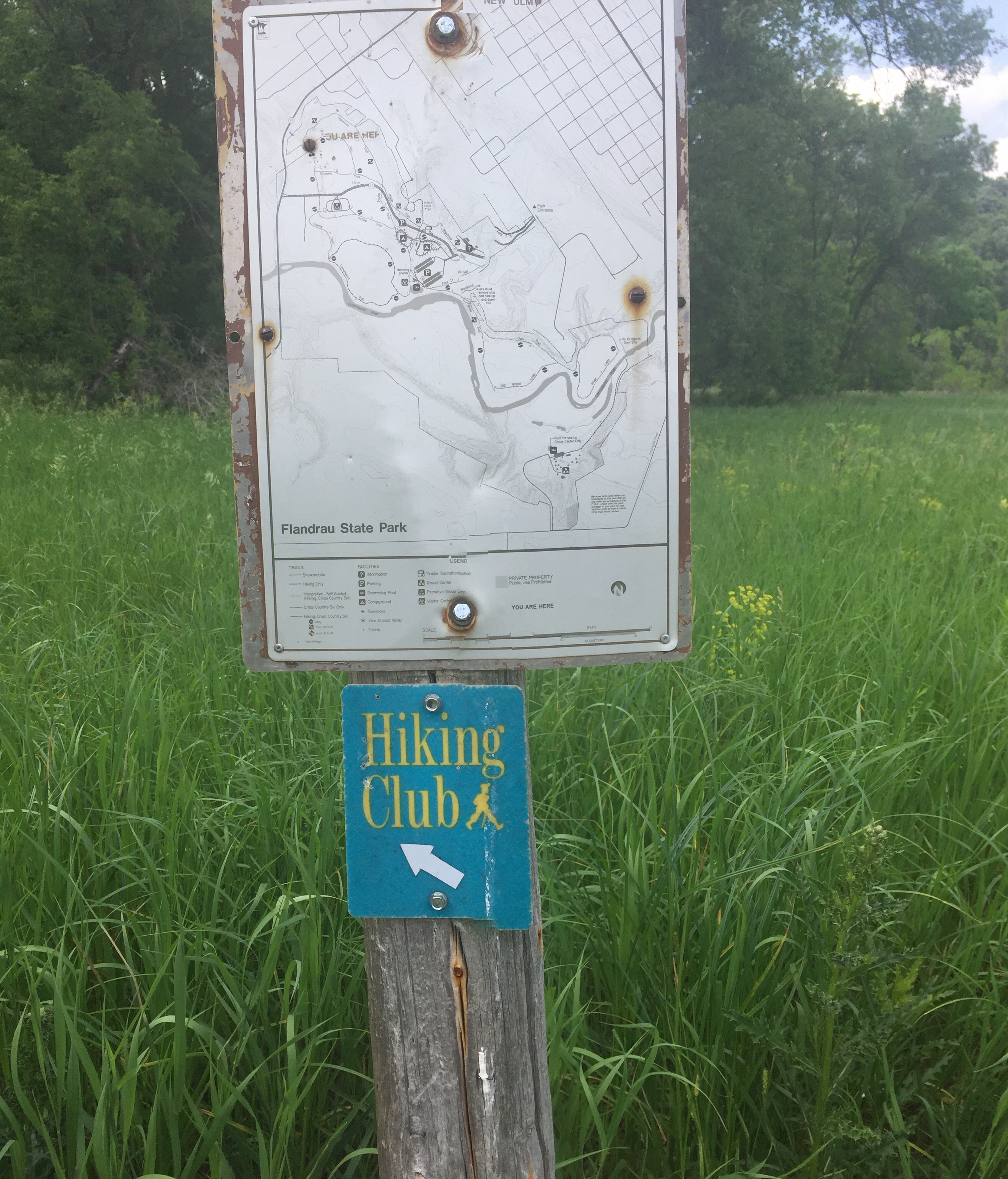 Have you been to Minneopa or Flandrau?  Share your story here and keep those boots dirty!